The newly released sim is the result of 14 months of work improving upon the original ATC's visuals and gameplay and five months of beta testing by a group of air traffic controllers and gamers.

"This game was designed for people who are interested in aviation," Brancard said, "the type of person who listens to channel #9 on United flights, or has taken a discovery flight."

Brancard has a long history with air traffic control and flight simulation games. He told Polygon that, in his youth, he was a member of an online air traffic control simulation group called SATCO (now called VATSIM, or Virtual Air Traffic Simulation network). Members of SATCO, through an add-on called SquawkBox, would coordinate with other people playing Microsoft Flight Simulator, acting as air traffic controllers, "usually [through] typed instructions back then with dialup, before VOIP worked very well," Brancard says. He later graduated with a degree in aviation technology.

"The college had an ATC class which used a simulator that actually had voice recognition," Brancard recalls. "The software was extremely frustrating as it required you to phrase things exactly a certain way and listen to long slow read backs, the training software wasn't designed to be fun.

"When the iPad was released in 2010," he said, "I wanted to play a realistic and fun air traffic control game so I developed my first app... I was surprised by the number of people from all over the world who e-mailed me saying they loved the app, played it everyday and wanted more."

Brancard set about adding modern voice recognition controls to the first ATC, which was released in 2010 and was far more complicated than the wildly popular iOS game Flight Control from Firemint.

ATC Voice is "very realistic," Brancard warns, but that his priority was making the sim fun. "It allows for some improper phrasing of voice commands, and lets you control the speed of the sim so there's no boring waiting," he said. And despite the complexity of rattling off air traffic control jargon while managing the flight patterns of planes, he says he made an effort to make the game easy for newcomers. Tutorials for both touch commands and voice commands, as well as a mini-game that lets virtual air traffic controllers practice voice commands, are included in the $9.99 app.

"The challenge in ATC Voice and other good ATC sims is turning the 2D representation of the aircraft on the radar display into a 3D image in your head and keeping track of what needs to be done next," he explained. "As more planes enter your airspace, keeping the 3D picture becomes harder and harder. 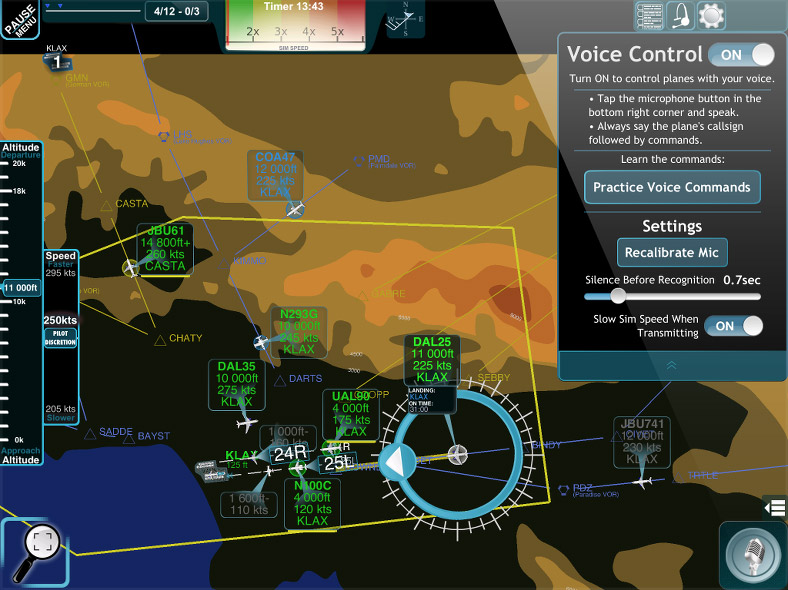 "The best part of a good ATC game is when you have just enough aircraft you can barely keep track of it all, but manage to react to problems and complete the level successfully."

ATC Voice is available now, for iPad only, through the iTunes App Store.