Share All sharing options for: Why Keiji Inafune turned to Kickstarter to make his Mega Man spiritual successor

At PAX Prime, veteran game designer and producer Keiji Inafune, revealed he was working on a spiritual successor to Mega Man called Mighty No. 9. He's taking that project to Kickstarter, seeking $900,000 to help fund his new side-scrolling action game, a project he said is a direct response to fan requests.

"After I left Capcom, I would go to lots of different game events and almost always fans would come up to me and ask me about Mega Man, Dead Rising and the wide variety of franchises I was attached to when I was at Capcom," Inafune told Polygon in an interview. "No matter how many times I would explain to them 'I don't work for Capcom anymore,' their passion would totally overwhelm that knowledge."

That fervor for his past work, Inafune said, eventually convinced him to give fans what they were asking for, something that Capcom seemed increasingly unwilling to give them: a new Mega Man game.

"When I thought about Kickstarter, which is a system where you're basically putting your money where your mouth is," Inafune said. "You say 'I will take that financial responsibility and burden with you, the creator, and we'll work together to make this thing come true.' It's not like posters who will just post on a message board and say 'Where is Mega Man? Where is this? Where is that?' That's easy.

"These are people who are willing to take the plunge with the creator to make something they love. That was what really led me to think this is really perfect for doing something new that I know the fans have been asking for for a long time."

Inafune and his company Comcept turned to developer Inti Creates and a group of partners to help bring that dream to life. Without access to his own creation, Comcept created their own character, a robot named Beck, the star of Mighty No. 9. Inafune says the character taps into the essence of Mega Man, but remains an original creation. 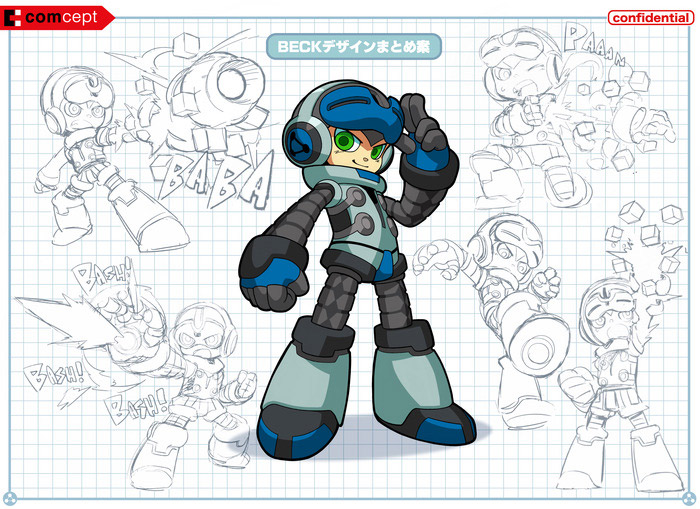 "When you're an artist or a designer, you have your own style," Inafune said. "The style of character that is Mega Man is, that is my spirit. When creating Beck, I wanted to create something that had that spirit, but was an original character. Trying to balance that isn't easy. If you say, 'We can't make this look like Mega Man' then you're going to get something that doesn't have my spirit or my art style."

Beck's character design, lead by artist Takenori Kimoto (aka Kimo Kimo), offers the "spirit" of Mega Man at a cursory glance, but that the two characters are "very, very different." It's the details, he says, like Beck's color scheme, his eyes, his facial features and the notable lack of a Buster Cannon, that help separate the two.

Inafune says he was more hands-on during the development of Beck's character design and the look of his enemies than he has been in recent years. He tweaked and adjusted Beck's look, "probably to the point of being annoying" to Kimoto.

"At this stage, nothing is locked down. Nothing is finished."

"For me, this is a very important character for me to give birth to," he said.

"The important thing to know is that right now, at this stage, nothing is locked down," Inafune added. "Nothing is finished. We have confidence in what we've been able to build so far, but one of the key approaches to Kickstarter is you need to work with the fans and get their feedback. There's still quite a ways to go with the design."

Mighty No. 9 is still at the conceptual stage, Inafune said. The team hasn't begun to build out the game and hasn't chosen what middleware it will use, a consideration that will depend on how well Comcept's fundraising goes and, later, what platforms Mighty No. 9 might come to. 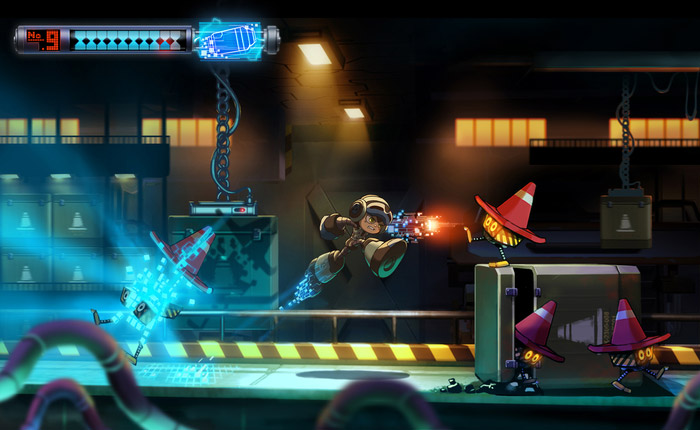 Direct fan feedback through channels like Kickstarter, Inafune said, is crucial to the design of Mighty No. 9 and, in his opinion, the future of game development.

"Honestly, it's something that I've been working with trend-wise [with Mega Man Legends 3 and Mega Man Universe]. I knew that involving the fans would be an integral part of the future," he said.

"Even as recently as [PlayStation Vita game] Soul Sacrifice, the demo we released for that game probably had more content than a publisher would be comfortable with," he said. "I wanted to push for that. It meant that the user would have a bigger end slice of what the game was and be able to provide more feedback."

"It's already right in front of our faces that being a creator, being flexible, listening to your fans, working with them, finding the balance of what they want versus what you want to create, that will be the future of development."

The days of game creators having totally autonomy and creating games without involving the fans are going to be ending, Inafune said. He believes that feedback from Japanese and Western Mega Man fans, which had very different ideas about the level of difficulty in those games, helped give that franchise worldwide appeal. With Mighty No. 9, Inafune plans to cater to tastes from Japanese and non-Japanese fans, promising Kickstarter rewards (t-shirts, box art) that's designed to appeal to each audience.

"listening to your fans, working with them... that will be the future of development."

"Back in the day, things like the package art [in North America and Europe] were largely different from what we created in Japan," he said. "And we were told that's just the way it was and we accepted that. Fast forward to today and being able to create your own titles from the ground up and really work with that character and name, I feel pretty confident in [Mighty No. 9] that we've come up with something that will work worldwide.

"We recognize the fact that it's a Japanese game, and you're going to have people that like the Japan art style but you're going to have people that like the Western art style. We're offering two package illustrations [so] maybe the main character will be holding a laser gun on the US package art, maybe he won't. This is all fan service. We know the roots of where these games came from and we want to make sure the hardcore fans come away with something special."

Don't expect Inafune to start interfacing with his fans through Twitter though. He says he has no plans to join the social network, where some developers interact closely with fans (and detractors).

"This is actually something hinted in our announcement trailer," he said. "The effect of technology on our lives, while it can look very beneficial on one side, on the other, there is a high price that's paid. It's something I constantly think about. Twitter is something I feel that's easy to control you, rather than you controlling it."

Twitter, he said, is just one more thing that could pull him away from thinking about his work. It's also a potentially dangerous way for him to say something in haste that he shouldn't.

"I don't want to be another Japanese creator that does that," he said, "and there are certainly a lot out there that I feel misuse Twitter."

Inafune, who's criticized Japanese game developers and publishers for their unwillingness to change their methods, said he believes that crowdfunding through services like Kickstarter could lead to new freedoms for creators like him. But the concept is not without its drawbacks and obstacles.

"Crowdfunding is something that gives Japanese creators new freedoms, sometimes to the point where they don't even realize it," he said. "Until now, there's been a company between the end user and the creator. The company has both obscured what maybe the end user wants, saying that, for example 2D games don't sell. But it also protects the creator. Having that company now out of the equation and allowing the creator to directly interface with the end user is something that could help generate new freedoms but also issues in Japan.

"Japan as a country isn't one that is into donating money to the arts, especially games. And they don't spend a lot of money with their credit cards. Getting the concept of crowdfunding to resonate with your average Tanaka on the street is going to take some time, because it's not in the culture yet."