Every time I sat down to play the Wonderful 101, I was convinced I was going to have fun. Every. Single. Time.

My unwavering optimism was a credit to the game’s relentlessly jubilant presentation, its boundless variety, its desperate eagerness to please its player.

The fact that the fun I kept hoping for out of The Wonderful 101 rarely materialized was due to … well, basically everything else.

When Earth is under attack, we call on the Wonderful 100, an international team of superheroes that we’re introduced to as they try to stave off an attack from intergalactic invaders known as the Geathjerk.

The Wonderful 100 is lead by Wonder-Red, an unassuming schoolteacher with the ability to form a giant red energy fist. More specifically, he’s able to form a fist from the other members of his team (including whatever nearby citizens he enlists to the fight).

All the team’s powers are created with this adorable effect. When Wonder-Blue makes his energy sword, for example, it’s composed of diminutive members of his team standing on one another’s shoulders.

It would all be really delightful if not for how these powers are summoned. The player (the 101st member of the team) must draw shapes to utilize these abilities either using the right thumbstick or the screen of the Wii U GamePad. A circle activates Wonder-Red’s fist, for example, and a straight line unsheathes the massive sword. 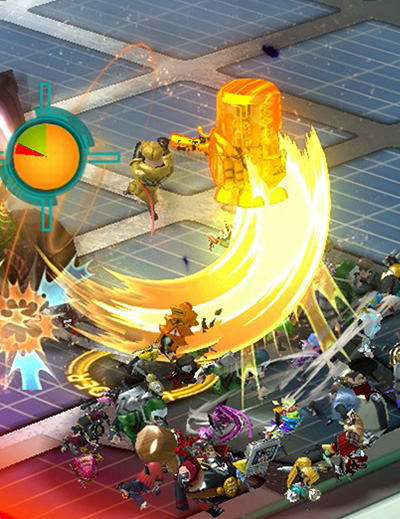 Practically nothing about this core mechanic works well. The Wonderful 101 frequently recognized one weapon, like the whip (a curvy "S" shape) when I was trying for another like the claws (a "Z" shape). Later in the game there are nearly a dozen shapes to contend with and this problem goes from mildly annoying to maddening. By the time I had to choose between an angle for Wonder-Green’s gun and an angle with a slight pause in the middle for the boomerang weapon, I felt like I was the butt of a not-so-nice joke.

Practically nothing about the core mechanic works well

Since the line is literally being formed by members of the team, you often have to try to draw the shapes in 3D space (like up the side of a building) which is similarly frustrating. This bit is a tad easier with the GamePad, but since you have to look away from the screen and remove your hand from the controls to summon abilities that way, it’s just not practical. It doesn’t help that the screen is so insanely cluttered most of the time it can be difficult to tell if you’re running your team line directly into enemies (that is if you can even find your hero to start with).

A supremely unhelpful camera piles on another layer of frustration. Enemies are often obscured because the camera is too close and zooming it out enough to see the whole battlefield compounds the clutter issue to a comical degree.

When you can clear all these stumbling blocks for any length of time, there are moments when The Wonderful 101's inspired — but deeply flawed — action is a joy. Once I learned, for example, that enemies sporting blue spikes were vulnerable to having their armor pulled away by Wonder-Pink’s whip I started to look forward to drawing a giant S (weapons scale to whatever size the player draws) and whipping the stuffing out of them. Presuming, of course, that I didn’t get stuck with giant claws.

Unfortunately, The Wonderful 101's visual cues are few and far between, and most battles consisted of cycling through attacks trying to find something that was effective against a given enemy. There are just so many different attacks to keep track of (in addition to each member’s "Unity" weapon, the whole team can transform into a spring, a rocket, a ball, a blob of defensive jelly and more) that looking for enemy weaknesses often felt like guesswork. Without more hints, I felt like I was fumbling in the dark.

This is exacerbated by the "Continue" screen that follows every death. It picks up right where you left off, and I imagine this was intended to remove some frustration. In practice, it robbed me of the fun of learning a tactic through failure and then applying it successfully on a second try. As my continues piled up (as did the score penalties that came with them) I was more frustrated, not less. Stupefyingly long boss fights, some of which can last upwards of 30 minutes, make The Wonderful 101 even more of a slog, and it's doubly painful when it piles on so many false endings it makes Return of the King look like the mid-meal series-ending blackout of The Sopranos by comparison.

Fortunately, The Wonderful 101 is more than willing to mix up its basic gameplay. You’re frequently called on to man a turret, pilot a spaceship in a 3D space battle or even an underwater shoot-em-up. It’s great that Platinum was willing to experiment this way, but these levels aren't highlights in a great experience — they're oases in a desert of tedium and frustration.

The joyfully campy story and dialog aims to provide the same distraction, but its desperate irreverence and thuddeningly unfunny dialog can’t quite get there. It’s cute, but it’s also a one-note and (like the rest of Wonderful 101) wore paper thin by the end of my 16 hours with The Wonderful 101.

It doesn’t help matters that most of the characters are ridiculously stereotypical cookie cutters. The team’s sole woman (Wonder-Pink, of course) is obsessed with beauty and makeup, the only East Asian endlessly delivers Confucian sayings through a thick accent. By the end of The Wonderful 101, I didn't think these repeated incidents were malicious — just lazy, perhaps. But even if these tired stereotypes don’t offend you, they’ll probably bore you.

But even at my most frustrated, I couldn’t shake an earnest urge to want to like The Wonderful 101. It’s colorful, it’s inventive, it’s frequently adorable. When Wonder-White climbs across walls, the 99 remaining team members dangle below him. I mean, it’s precious. The scale is really amazing too, taking the team from an Innerspace-style bodily adventure to a massive battle from two skyscraper-sized robots in space. 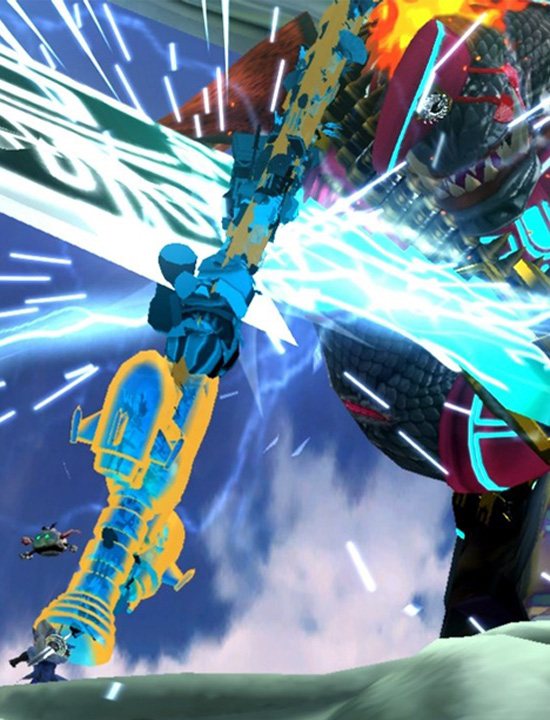 How do you not love a game that wants so desperately to delight? Well, you fight the camera through the whole scene. You summon the wrong weapon at a climactic moment. You hear the umpteenth joke fall flat. And so on.

The Wonderful 101 wants so much to fly. Heck, I wanted it to fly. But itâs saddled with so much weight it can never seem to pull out of freefall.

The Wonderful 101 was reviewed using an early retail download code provided by Nintendo. You can read more about Polygon's ethics policy here.