The iPhone 5C has "all the incredible technology of the iPhone 5," according to Apple's Phil Schiller. Unlike the plainer hues of the phone series so far, the cheaper 5C comes in bright colors: green, white, blue, pink and yellow. The back and sides of the device are joined into a single unit, giving it a seamless look — though Apple is launching similarly bright silicone cases for the phones, as well.

The 5C's tech isn't identical to the current iPhone 5; it does host an A6 chip, but carts a 4-inch retina display, full sRGB standard and a higher battery capacity. The biggest selling point is the price: On a two-year contract, the 16GB iPhone 5C will cost $99, while the 32GB model will cost $199. The aforementioned cases will cost $29 a pop. 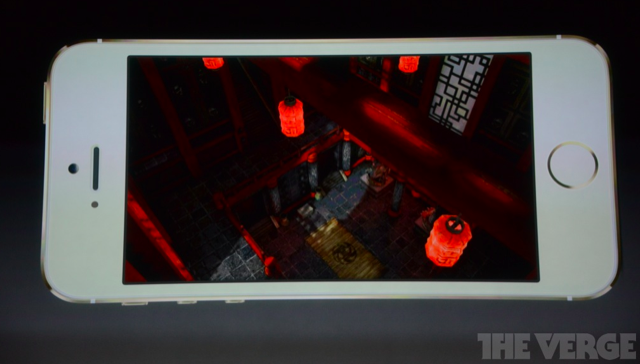 The iPhone 5S is a more powerful, more high-end version of Apple's current smartphone model, and will come in three colors: Gold, slate and "space gray," Schiller said. Unlike the build of the 5C, the 5S is composed of high-grade aluminum, with chamfered edges. The phone will sport a new, 64-bit chip — the first ever on a smartphone, according to Schilling — called the A7, which will allow iOS 7 and Apple's first-party applications to run in 64-bit.

ChAIR's Donald Mustard took the stage to demo the next Infinity Blade title running on the iPhone 5S, and said the new phone runs five times faster than the current iPhone 5. The phone utilizes OpenGL|ES 3.0 — as does the new Nexus 7 — for improved graphical processing, which was on display during the Infinity Blade demo.

The phone will support a new co-processor called the M7, which works alongside the A7 to continuously measure the device's gyroscope, accelerometer and compass. The chip can tell apps what the phone's user is doing at any given time based on the M7's readings. Schiller praised the new chip's potential for fitness applications, but it seems like game developers could utilize it for some creative apps as well.

The phone sports other hardware improvements as well, including slightly larger pixels, an enhanced camera and slightly extended battery life over the iPhone 5. The phone also sports a fingerprint sensor called Touch ID, which is built into the home button of the 5S; it can allow a registered user to unlock their phone, authenticate iTunes purchases and fast-track other security gates with a single thumb press.

Pre-orders for both phones begin this Friday, Sept. 13, and both will be available to purchase in select regions one week later, on Sept. 20.