There are pieces of a unique, interesting game within Puppeteer, but you'll need to dig to find them

Puppeteer calls back to an entire era of B-tier platforming titles.

When most people think of platformers, they think of the Marios — if they’re all about design and quality — or the Sonics — if they like flash and spectacle. But during the late 80s and early 90s, there were the other guys. These are the ancestors that Puppeteer nods to, drawing influences from 16-bit era Japanese platformers like Kid Chamelon, Dynamite Headdy and Rocket Knight Adventures.

What did all of these games have in common? They tried for quirks, for personality. They had, for lack of a better term, spunk. And Puppeteer has an excess of those things — the quirk, the personality, the spunk. But amidst a mountain of all of those things, Puppeteer gets tangled in poor level design, spotty controls and a cast and story that never, ever shuts up.

Puppeteer’s premise is a collection of children’s fantasy clichés tied together via a dominant aesthetic and presentation style. Framed as a children’s marionette performance, Puppeteer tells the story of human boy Kutaro, who’s stolen away from the earth and transformed into a puppet by the evil magic of the Moon Bear King. When the King tears off Kutaro’s head, he finds a temporary replacement and sets off on an adventure to defeat the villain. Using a pair of magical shears known as Calibrus, Kutaro relies on the questionable help of a sun princess, a hideous witch with an agenda of her own, and a number of other odd-ball characters. 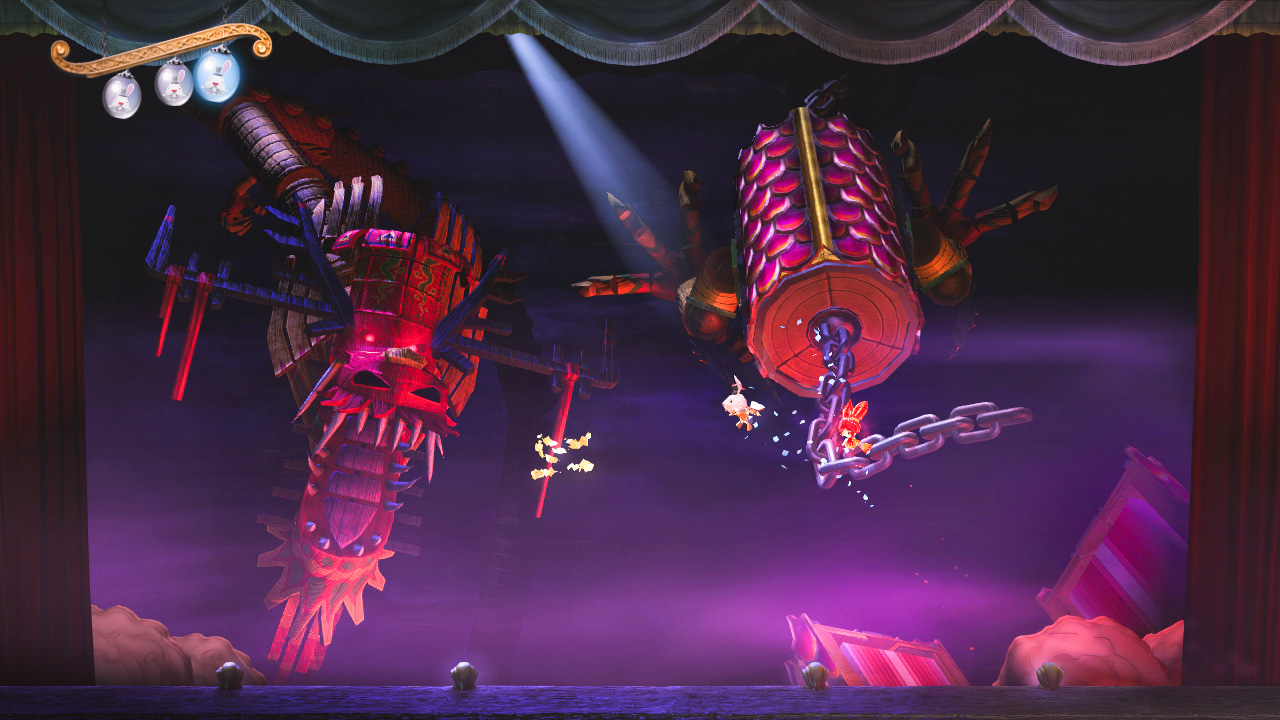 Puppeteer's platforming and action elements often contradict each other

From a design perspective, Puppeteer sits somewhere between an action game and a more traditional, sidescrolling platformer. As you progress through the game, new abilities are granted that change the way you have to navigate the environment, whether that’s through a grappling hook, a wrestler-style slam, or bombs.

These serve as attacks and are used against bosses that are more platforming puzzle than exercises in action-game reflexes, but they’re also key to more and more complicated level navigation. As Puppeteer starts, you’ll be doing standard running and jumping from one platform to the next, avoiding or attacking enemies, but over time you’ll also use the grappling hook to pull scenery toward you, for example, or smash switches with a stomp. You also control the pixie Pikarina with the right analog stick (or the PlayStation Move, if you prefer), though she’s mainly used to trigger hidden items in the background or to activate sections of the level.

The problem with Puppeteer’s combination of action and platforming quirks is their inherent contradiction of each other — platforming requires decent timing while running from one side of the level to the other, but using abilities stops Kutaro cold. There’s no dynamism in the new skills he learns — the grappling hook only serves to pull platforms toward you, and only while you’re standing still; the stomp is also binary and difficult to position mid-air where the game often expects you to do so.

Head abilities are only available at specific points in each level

Puppeteer’s "head" mechanic feels even more squandered. Kutaro’s headless self finds new noggins throughout the game that purport to offer new abilities, but this quickly proves to be a mostly cosmetic change. Head abilities are only available at specific points in each level, where they either make a level somewhat easier or trigger a hidden bonus stage, which requires specific heads at specific times. 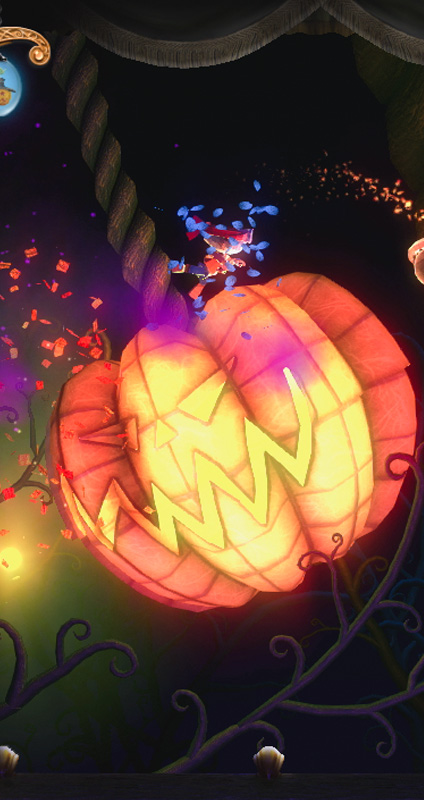 There are dozens of heads to collect and no way to know which three you should have with you at any given time, which is frustrating. The moments where you trigger head-related level changes are some of the more entertaining, lively moments in the game — such as when you summon a giant triceratops who then splits into a smaller dinosaur stampede — and it was frustrating to walk past spots where I knew a specific head would do … something, anything, and not have it in my possession through no fault of my own.

Puppeteer’s bosses also shine brighter than the ho-hum tedium of basic stages throughout the game. While I could have lived without the seven hundred thousandth example of needless quicktime events in a game this year — they feel out of place and obligatory here — bosses offer good opportunities to experiment with Kutaro’s abilities. But more importantly, there’s a pretty good balance between danger and opportunity that allowed me to feel smart for figuring out their weaknesses, and skilled for capitalizing on them. 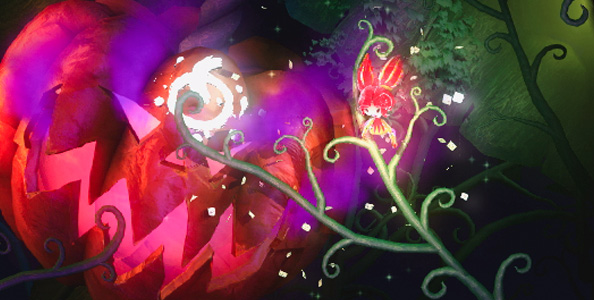 The boss encounters also offer the best, least frustrating opportunities to capitalize on Kutaro’s magic, stolen shears, as clever openings are left to snip away at the enemy or the environment. It’s a fun reminder of the craft-oriented aesthetic that Puppeteer otherwise too heavily relies on elsewhere in place of the smart level design it rarely finds, or the needlessly punitive obstacles the game is most likely to throw at you when you’re least equipped to react to them, or even see them.

There are some inspired moments of action and decent platforming spotted throughout, particularly in the Halloween and Mexico themed levels, but these are almost overwhelmed by the monotonous grind that plagues the rest of the game — to say nothing of the extended periods of time where you’re not playing the game at all, as Puppeteer desperately tries to weave together a story with little sense of coherence or trajectory. More often, it was a case of "and then this happened."

Puppeteer’s dialogue and characterization tend toward British theatrical tradition — there’s a snark and sneer to most characters lines that suggests satire, though Puppeteer never quite gets there, and the fourth wall separating the viewer from the fiction on stage is transparent and so thin as to be non-existent at times. I had a hard time liking anybody, whether villain or "hero" or otherwise.

The story stretches across seven acts of three curtains each, sort of meandering where it wants to. Puppeteer throws in new plot twists with little rhyme or reason, dipping liberally into anime and manga clichés and tropes. It tries to build something that never clicks together into a unique story, despite how in on the joke Puppeteer insists it is — and as the game winds toward its conclusion, clichés transform into other clichés.

There are pieces of a unique, interesting game within Puppeteer, but you'll need to dig to find them

Itâs this sort of inconsistency that chews away at the fabric of Puppeteerâs structure. For every clever touch, thereâs a shrieking piece of dialogue talking over key narration; for every cute visual gag, thereâs a twitch bit of platforming that Puppeteerâs mechanics arenât suited to handle. Much like Puppeteerâs environments, there are pieces of a strange, unique game hiding here, but youâll have to dig through an awful lot of problems to find them.