Sixense Entertainment, the developer best known for powering the Razer Hydra motion controller and for bringing PlayStation Move controls to Portal 2, launched a Kickstarter campaign today to fund the final stages of development of the STEM System — a new wireless motion-tracking controller and software development kit.

Sixense's president and CEO Amir Rubin told Polygon that virtual reality and simulation has long been a passion of his — he first started using it when he was trained with simulations in the Israeli Army in the 1980s. He has always wanted to create motion tracking that captures the user with an immersive, virtual reality experience.

"We don't believe wires can actually deliver the kind of immersive experiences we started the company for."

He formed Sixense in 2007 and focused on research and development. By 2010, Sixense had created a wireless motion controller prototype, but the cost of making the device wireless was too high at the time. The company was able to reduce the cost by going wired in the Razer Hydra, but was still determined to eventually deliver a wireless experience.

"We were never satisfied with wires," Rubin told Polygon. "We don't believe wires can actually deliver the kind of immersive experiences we started the company for. So we continued with our R&D to perfect the wireless controller, but with the benefit of having the hydra in the field and developers and consumers providing us with feedback."

The result of that R&D is the STEM System, a wireless motion controller that uses electromagnetic technology to track a user's movement.

"Electromagnetic tech is the most precise method to track your motion," Rubin said. "It's used for motion capture by movie studios and it's used by the military to track helmets in the cockpit."

Coupled with the Oculus Rift, the STEM System opens up many new game design and game experience opportunities for both developers and consumers. 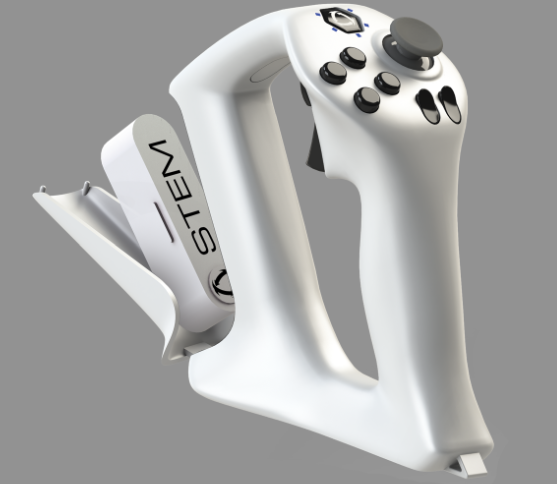 "The Oculus Rift does orientation really well," said Sixense creative director Danny Woodall. "There is some interpolation it can do, so it knows where the neck and eyes are, but it can't register leaning."

In a demo that Sixense showed Polygon, we played a number of games that demonstrated what the Oculus Rift could do with and without the STEM System. The STEM itself is a tiny block that contains all the processors necessary to make itself trackable. Users can attach up to five on their body (one of each arm, one for each leg, and one on the hips or on the Oculus Rift headset). During the demo, the our headset had a STEM System attached to it. This meant that when we entered the virtual game worlds, the game could register when we were leaning forward, peeking around corners or looking up chimneys.

We could bring our hands to our face, wave them in front of us and cross them back and forth with no latency.

With the STEM System controllers in our hands, it also meant that when we looked down, we could see virtual hands that moved in the same way we moved our controllers. We could bring our hands to our face, wave them in front of us and cross them back and forth with no latency. In one demo, we were even able to climb a virtual ladder by putting one hand above the other and "pulling" ourselves upward.

Rubin told Polygon that this opens up all kinds of opportunities for new types of gameplay. For example, in a first-person shooter, players could potentially lean and peek around corners and through windows. It also means that players could look down at themselves in virtual uniform and detach weapons from their bodies that they can use in combat.

The developers we spoke with from Sixense said that this could all be achieved with precision and no latency because of the technology behind the STEM System.

The use of electromagnetic technology also means the system doesn't need to be calibrated, it works in the dark, and it can be detected even under clothing, so no line of sight is required.

If the campaign is successfully funded, Sixense aims to ship the first STEM System units to backers by July 2014. The campaign has a funding goal of $250,000.