Share All sharing options for: Mozart meets Minecraft in this university's new opera

A collection of university and high school students have banded together at Virginia Tech University to create a completely original opera that will be set to the works of Mozart and take place within the worlds of Minecraft.

In March, the university recruited eight high school students to begin work on the fully produced virtual opera. Starting with music borrowed from Mozart's operas, the students were asked to create a story, the words for the opera (the libretto) and then craft a virtual setting inside Minecraft.

The final production is set to culminate in December with a live performance at the university's Cube space at the Center for the Arts, where Virginia Tech music majors will sing the score and the students will act out the parts with avatars in the world they created.

Ariana Wyatt, an assistant professor of voice at Virginia Tech, said she came up with the idea when trying to figure out how to engage students in opera.

"How do you engage teenage boys into wanting to create an opera," she told Polygon. "I don't think if you go into a classroom and say, 'Let's go make an opera,' many people would respond."

She also wanted to find a way that anyone, no matter their skills, could participate, she said.

"I wanted to create something that they were able to do," she said. "I didn't want it to be something where you had to have particular skills, like carpentry or music. I thought there had to be a way to produce a set virtually, and then Minecraft proved to be the best vehicle."

After getting the word out to area high schools through fliers and student teachers, Wyatt found herself in the enviable position of having to decide which of the many who applied to help create the opera would make the cut.

Once selected, the group of teens gathered regularly to create the opera and build their virtual set. The work will be performed on on Dec. 4 at 7:30 p.m. and Dec. 7 at 2 p.m. Two groups of five Virginia Tech music majors will take turns singing the score over the two days and the students will act out the parts in the game, while two unseen players will serve as virtual cameras.

A separate team of programmers at Virginia Tech are working on a mod that would give the square-headed avatars from Minecraft more emotive faces.

"We're trying to alter the avatars so they can open their mouth or furrow a brow perhaps," Wyatt said.

The students controlling the avatars are also going to have to learn to act through their characters on some level.

"That's something we're going to work on when we rehearse next month and the month after that," Wyatt said. "They have to, they going to need to learn how to act essentially."

While the initial plan only included a local performance, Wyatt said they made decide to broadcast or record it for later playback online. 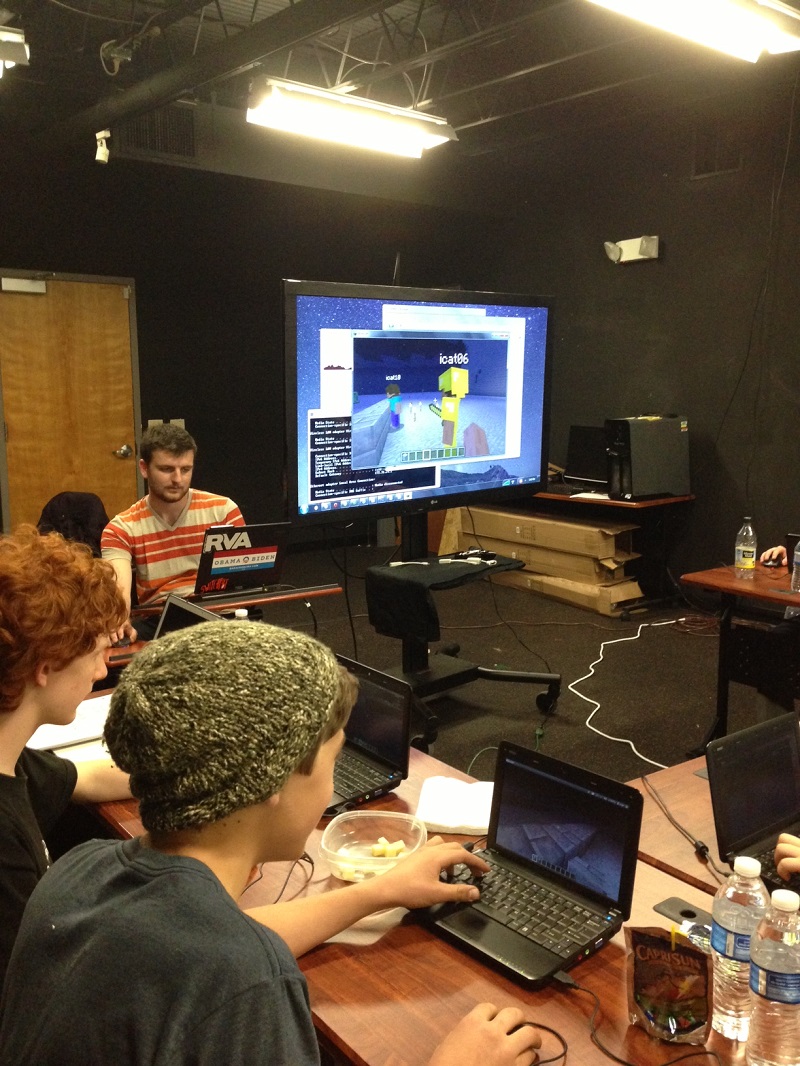 The opera, which will be sung in English and is still to be named, takes place in a post-apocalyptic underground.

"Some sort of apocalypse took place and the surface is no longer habitable," Wyatt said. "Some people are living underground and the children are separated from their parents, who might still be alive on the surface."

The work has five characters, but still no ending.

"We will be figuring that out," Wyatt said. "They had just finished the story, but haven't figured out the ending yet."

Having now gone through the process of helping to produce what could be the world's first Minecraft opera, Wyatt said the work involved approaches the effort put into creating a live opera in the real world.

"I think it's almost about the same amount of work," she said. "It's not less work just because it's virtual. There is still a great deal of discussion and input and creative changes that go into it, the same amount you would have in a traditional production."

While Wyatt still isn't sure how it's going to turn out, not exactly, she remains committed to the idea. She knows, she said, that the audience will be able to hear the emotion of the opera in the voices of the singers even if the technology of the game can't express it. And besides, she said, it has already succeeded in what was most important to the five professors behind the project: getting students excited about opera.

Her hope is to turn this into a regular affair and perhaps to figure out way to create something, a package of software and a guide, so she can share the idea with communities around the country

"Then they can have the ability to do it with their students," she said. " The goal is to engage students in the arts because of the wonderful effects it has on children and their success in life. It's a way to encourage self-expression and confidence and all of the things that come along with producing an opera.

"That's why I wanted to try and do something like this."