The last big Grand Theft Auto arrived to universal acclaim, becoming one of the highest rated video games in history. It was a console-defining title, an interactive sandbox of cultural satire that, according to the New York Times, set a new standard for what is possible in interactive arts.

Grand Theft Auto 5 lands months away from the launch of new, paradigm-shifting consoles, squarely into an evolved gaming landscape that now includes massive mobile hits, a thriving indie game scene and a singular Goliath in the Call of Duty franchise.

I sat down with Rockstar Games co-founder Dan Houser at his New York offices recently to ask him how he thinks the beloved series fits into this new Hollywood of video games. Is, I wanted to know, Grand Theft Auto still relevant?

"I hope so," he said. "We, as a company, have tried not to get involved in that sort of discussion. You know, it's not a sport, we're not involved in competition with people that way. We're trying to make something that is hopefully very enjoyable and that some people find amazing and incredible and really love, that we can hopefully make the people that invested in us some money back.

"The rest has always been something we've tried to shy away from, and always our challenges as we perceive them are creative. We're trying to push video games forward to the best of our limited ability. We're not trying to do anything more or less than that. The merits or demerits of games should be about creative strengths and weaknesses, and areas where they need to evolve, or areas where they're already doing amazing stuff, or things that they supposedly can't do, not about how much money they can make. That sort of Hollywood way of looking at things is never really been something that we at Rockstar have engaged in."

"That sort of Hollywood way of looking at things is never really been something that we at Rockstar have engaged in."

Houser's expectations for Grand Theft Auto 5 are both simple and grand. He wants to deliver something that pushes some aspects of video games forward, and beyond all else, something that people enjoy playing.

In Grand Theft Auto 5, players take on a trinity of protagonists, controlling when they hop into the shoes of any of the three characters. When not being controlled, that character goes about his everyday business, living his life, getting into trouble, being, essentially, alive.

Delivering a narrative-heavy game in a free-roaming sandbox world through the eyes of three very different characters was a challenge, one that Houser hopes will change the way people tell stories in games.

And that desire to deliver change, to edge the medium of video games forward, never dwindles for Rockstar. But even more important to the developer than innovation, is that they deliver fun.

Houser says he's not sure what the future holds for Rockstar beyond their upcoming work on Grand Theft Auto Online, a portion of GTA 5 that arrives in October for everyone who purchased the core game.

David Kushner, contributing editor of Rolling Stone and author of Jacked: The Outlaw Story of Grand Theft Auto, says that while Rockstar has a number of other popular franchises, Grand Theft Auto is likely to remain the developer's crown jewel.

"GTA has become sort of like the Star Wars of modern gaming, and it's hard to make one of those franchises let alone more," Kushner said. "Rockstar has other games that would be wonderful to see as sequels &mdash; like Bully &mdash; but GTA will be their legacy. I'm sure they'll continue to innovate within the GTA franchise and other titles &mdash; there's plenty room in the GTA universe to create new and compelling experiences for many years to come." 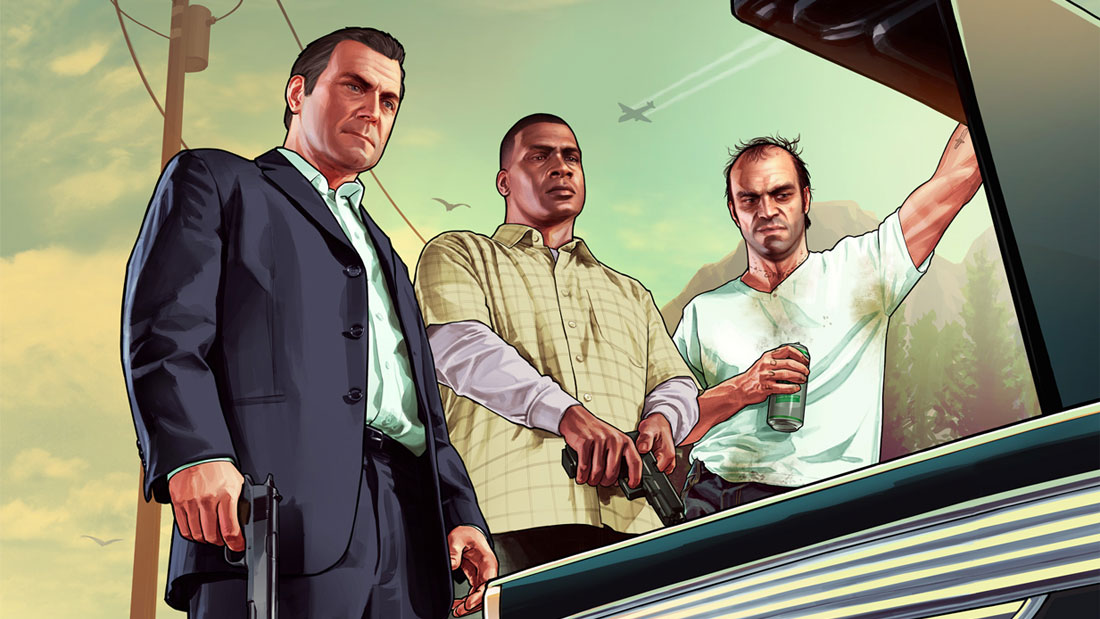 What could a future Grand Theft Auto entail? Houser says very little is off the table.

"At the moment it feels like [Grand Theft Auto's] D.N.A. is contemporary-ish, America-ish, English-speaking-ish, because that's what it has been," he said. "But that doesn't necessarily limit it to those, that's just what we've done so far."

The only thing about the franchise that is set in stone, he said, is that it has to be an open world game.

"Everything else is discussed," he said. "We might come back and say, 'Let's not do it because it takes away these things that we like about the game or takes away those things,' or, 'Actually, doing Caveman is not fun because they haven't invented the wheel yet.'

"We might not do it, but we always discuss it. We discuss anything. Many outlandish ideas have been discussed and have been rejected, or they could turn into another game, or they could inspire something else."

Crime fiction is also an important core element of the franchise, but Houser says that with GTA Online, the franchise could evolve in "many crazy directions."

"At some point in the next weeks and months [we] will have to actually think about what we're doing next, and if we're going to do anything."

"It's more about ‘We built the world, you go in there and have fun,'" he said. "We have lots of ideas of how that might evolve and we will work with the audience to see what directions they want to go, because it's easy enough to make small bits of content for [GTA Online]."

For now, Houser says he is content focusing on the next month, a period of time that will include the launch of GTA 5 and the follow-up release of GTA Online.

"I do not know what the future of anything is aside from the next few days and then Oct. 1," he said. "At some point in the next weeks and months, [lead producer Leslie Benzies and artist Aaron Garbut and co-founder Sam Houser] and myself will have to actually think about what we're doing next, and if we're going to do anything. You know, maybe we'll go ‘Well it's enough now.' But hopefully ... we'll see."

While Houser never really answered the question of relevancy, Kushner said the release of the game absolutely marks an important pop-culture moment.

"A new GTA game tends to always be a culturally relevant event, because it breaks sales records and racks up critical acclaim," he said. "It's also usually a showcase for what a game can achieve with the latest available technology and design. The industry/culture, however, has changed with the popularity of mobile and social games, so GTA will have to compete in a new arena. But there are millions of hardcore fans who will surely play this eagerly and obsessively."