Share All sharing options for: Hands-on with the rounder, lighter new PS Vita

The new PlayStation Vita's facade is very, very similar to the current model, but that veneer hides a fairly huge overhaul that really only becomes apparent after you hold the upcoming redesign with your own two hands.

A single demo station for the new model present at a gaming megastore in Tokyo's electronics-stuffed Akihabara district let passersby go hands-on with the new model, which is slated to hit Japanese store shelves this October. From afar, the changes that are being made to the new model aren't especially apparent — aside from the now rounded-out Start, Select and Home buttons and a seam surrounding the handheld's front touchscreen, it looks nearly identical to what we have now.

Beyond and around that front view, though, the changes become far more apparent. The console is much thinner than its counterpart, and as a result is shockingly light — even with the security cable and theft-preventing harness around the demo unit, picking up the new PS Vita required less effort than I assumed. The actual difference in weight between the two models is just around 60g — not quite as huge a drop as the PSP, which lost about 100g in transition between the PSP1000 and 2000 — but it's enough to give the new Vita a noticeably different feel. 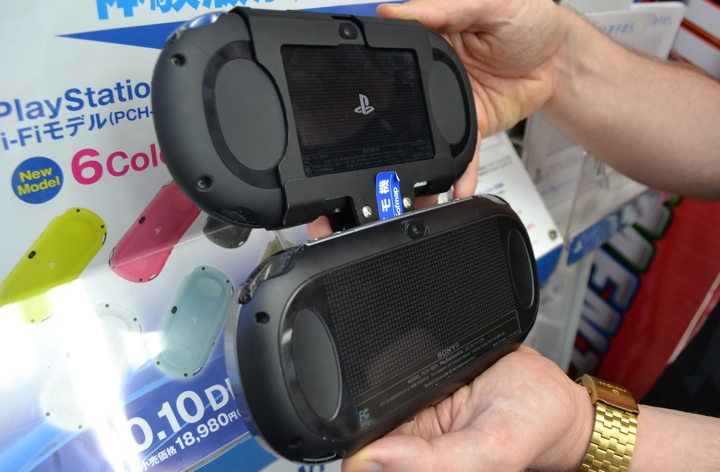 The other most obvious difference is the rounded edges of the new Vita, which felt just about as easy to grasp as the current, flatter edge of the current Vita. It's almost as if the flat circumference of the current Vita has been removed entirely, with the rounded edges providing a seamless transition from the rear of the device to the front. It feels like you're holding a tablet, not a game console — a neat trick, considering it's still got the multitude of inputs that characterize the Vita.

Speaking of, the rear touchpad has undergone a major area reduction in the transition. Whereas the rear touchpad on the current Vita takes up most of the real estate on the device's backside, the new Vita sports a narrower touchpad, with the freed-up space allotted to larger divots for you to rest your fingers on. The bigger fingerholds are actually quite comfortable; despite the fact that the new Vita's so, so much thinner, it's still easy to sink your fingers into the back of the handheld, either resting it on the side of your knuckles or gripping it in order to hold it up right in front of you.

The touchpad's shrinkage will likely decrease the number of times that you accidentally touch it while playing a game, which will certainly prove a boon for those titles in which touchpad integration was an unnecessary afterthought. For some though, it could prove problematic. The current Vita's touchpad isn't quite 1:1 with the front touchscreen, but it's close enough to give the illusion that you're tapping directly on the reverse side of the world you're looking at. The smaller touchpad on the new Vita could shatter that illusion for games that utilize it, like Media Molecule's upcoming platformer Tearaway. 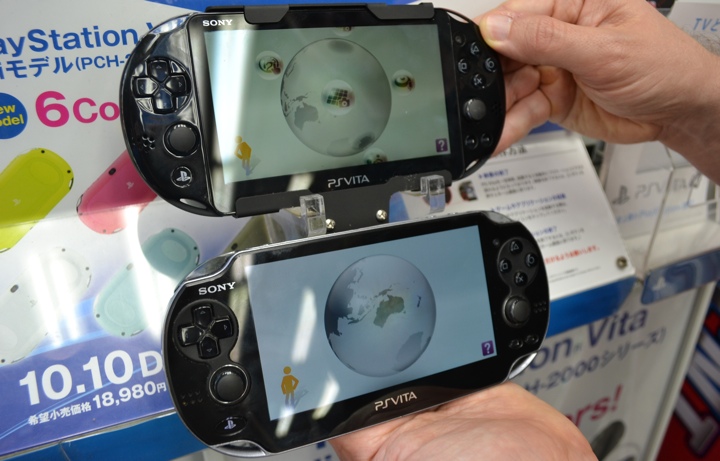 Comparing the new Vita's LCD screen to the current Vita's OLED screen proved a bit difficult, as the demo unit didn't allow us to change the brightness settings of the former. (In the comparison shot above, the current Vita's brightness is maxed out.) The unit's also right on the street, so glare was also somewhat problematic — still, despite those obstacles, the differences are easy enough to spot. Colors on the OLED screen are more vivid, the picture just sharper in general. The viewing angle seemed much less forgiving on the new Vita, as well; but again, without access to any brightness settings, it's hard to judge that element fairly.

It doesn't look bad, not by any stretch of the imagination — it's really only once you compare it side-by-side that the LCD screen's colors fall a bit flat.

The PCH-2000 model for the PS Vita launches in Japan on Oct. 10; no North American release date has been announced so far.