How Dark Souls 2 will make life even harder

Share All sharing options for: How Dark Souls 2 will make life even harder

The creators of Dark Souls 2 are adapting the gameplay systems of the original game in ways that will make life — and being undead — far more difficult for players. Certain gameplay crutches that players have relied upon to make Dark Souls slightly easier are being kicked out from beneath them, adding greater challenge and unpredictability.

Perhaps the most surprising change is how the world of Dark Souls 2 treats players who are undead — or in "hollowed" form. In the original Dark Souls, it was often safer to play as an undead character than one with their humanity restored. Other players couldn't invade you while playing as an undead. Not so in Dark Souls 2.

"There's no easy way out this time," a Namco Bandai rep said when discussing the change that allows players to be invaded at almost any time (as long as they're online).

In worse news for Dark Souls players who spent much of their adventure as an undead, From Software is adding another punishment: Dying consecutively as an undead will now cause your maximum hit points to deplete. The more you die, the smaller your life bar. That can be reversed by restoring your human form by consuming an item called a Human Effigy. 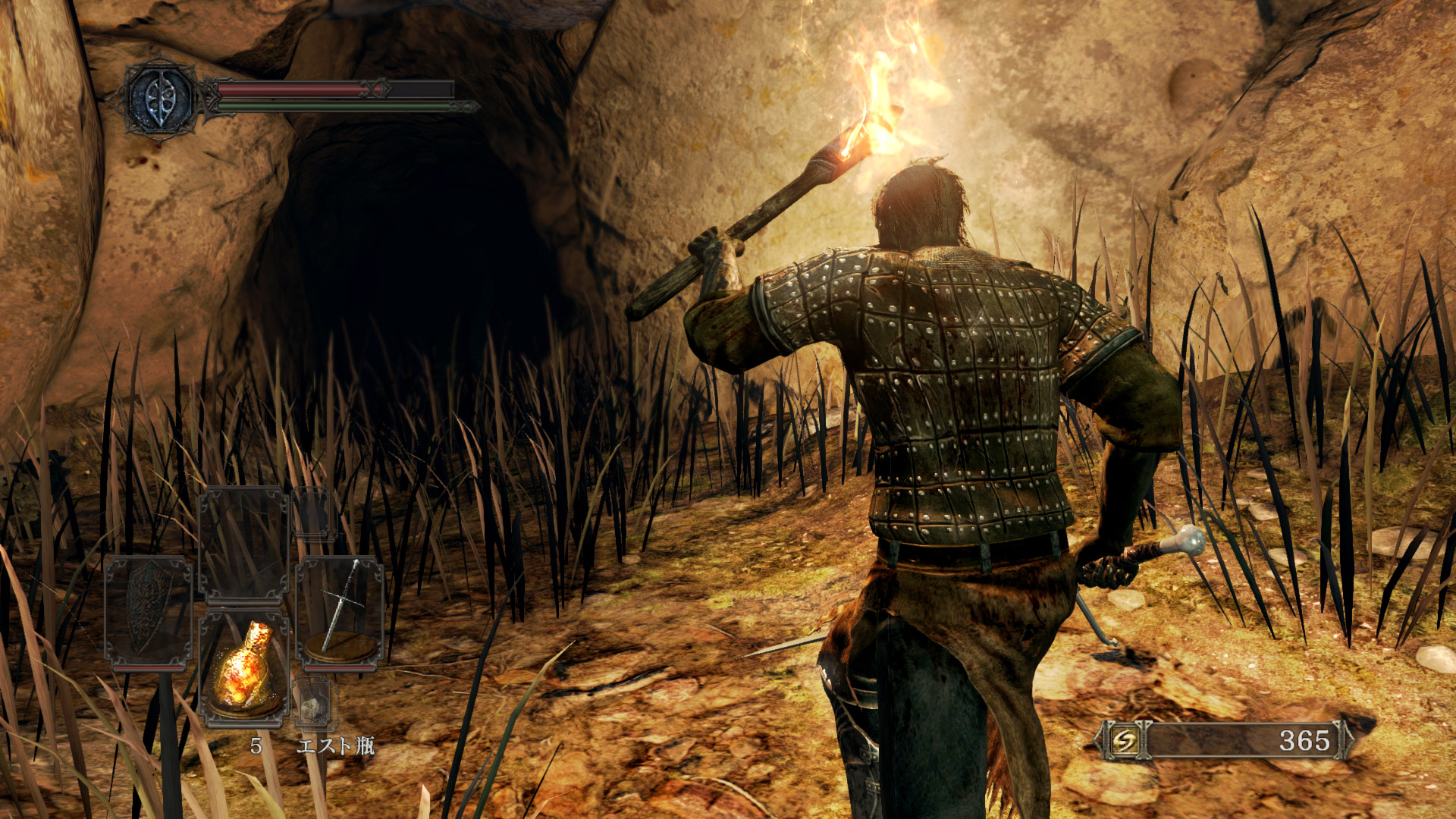 According to game director Yui Tanimura, players can lose up to 50 percent of their max health by repeatedly dying as an undead. That may change, he said, but the challenge of playing with half your life bar is "the kind of obstacle I want players to overcome." Players have dealt with similar penalties in previous games — soul form in Demon's Souls, curse effects in Dark Souls — but the new change adds a sense of greater worry with each death.

Dark Souls 2 will also see changes to how players can summon others to their own world for cooperative play. Players summoned to your world will now only be able to join you for a limited time; how long depends on how experienced your cooperative phantom ally is. The more enemies a summoned players has killed, the shorter they'll live in phantom form.

I asked Tanimura whether those time limits on friendly phantoms would mean an ally might disappear in the midst of a cooperative boss fight. He said that was something still under discussion.

Players who wished to be summoned to help another player now have two items they use to do so, a White Sign Soapstone and a Small White Sign Soapstone. According to the description, the smaller soapstone is used for a shorter duration and "only in particular places." The regular-sized stone rewards players with something called a Token of Fidelity for successfully helping others. Splitting the act of creating a summon sign across two items seems confusing at this stage. It's not immediately clear what the benefits are. 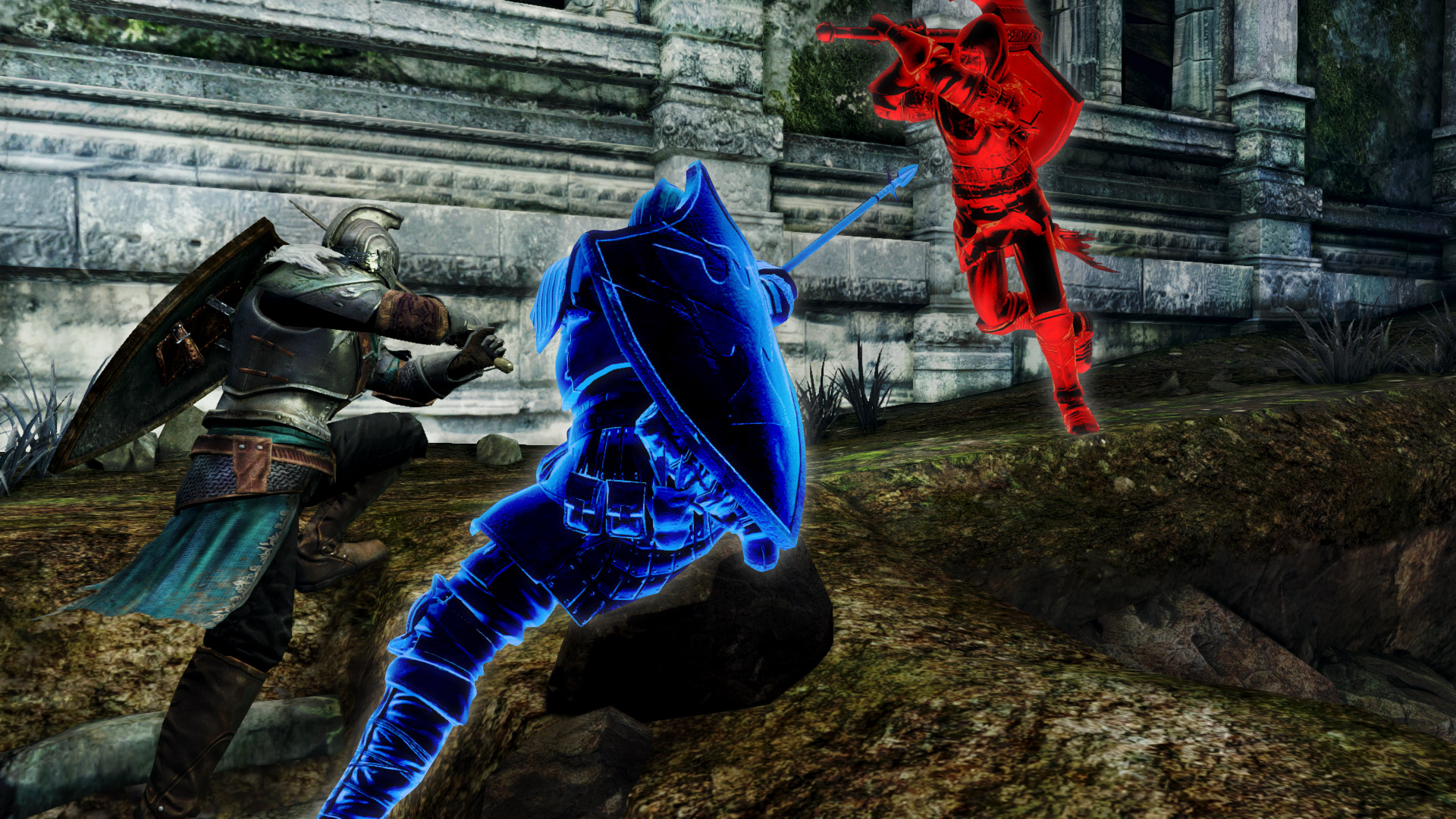 There are a few concessions being made to help players in Dark Souls 2. Blood stains and messages are expected to appear more frequently, Namco Bandai says, thanks to the game's server-based architecture. Messages also no longer require the use of a soapstone. Writing messages for other players is simply a menu item choice now. There's also a covenant players can join, called The Way of Blue, that will automatically summon a phantom ally, a Blue Sentinel, when they're invaded by an enemy black phantom.

Players will be able to experience some of these changes in the upcoming network beta test for Dark Souls 2, which will launch this October. During a visit to Namco Bandai's Tokyo headquarters, we got an early peek at the beta which puts players in a new area called Huntsman's Copse. It's a dark, forested section of the game filled with a variety of undead, from lowly club-wielding dreglings to grimy butcher-like enemies armed with huge sickles.

The beta version we played featured six pre-built characters: warrior, soldier, sorcerer, temple knight, dual swordsman and hunter. Each comes equipped with a variety of weapons, armor and spells, but players will be able to find, purchase and equip replacements, as well as level up their character.

Players in the beta will notice the game's user interface has been given a substantial overhaul. The game's menus have redesigned to pack a as much information into as little screen real estate as possible. That means less scrolling through vertical menus in search of a particular item, but the new, grid-style layout is incredibly dense — which is compounded by the fact that Dark Souls 2 now lets players equip up to three items (swords, wands, shields, bows, etc.) per hand and up to 10 items (Estus Flask, life gems, homeward bones and other consumables) in their quick access inventory slots. 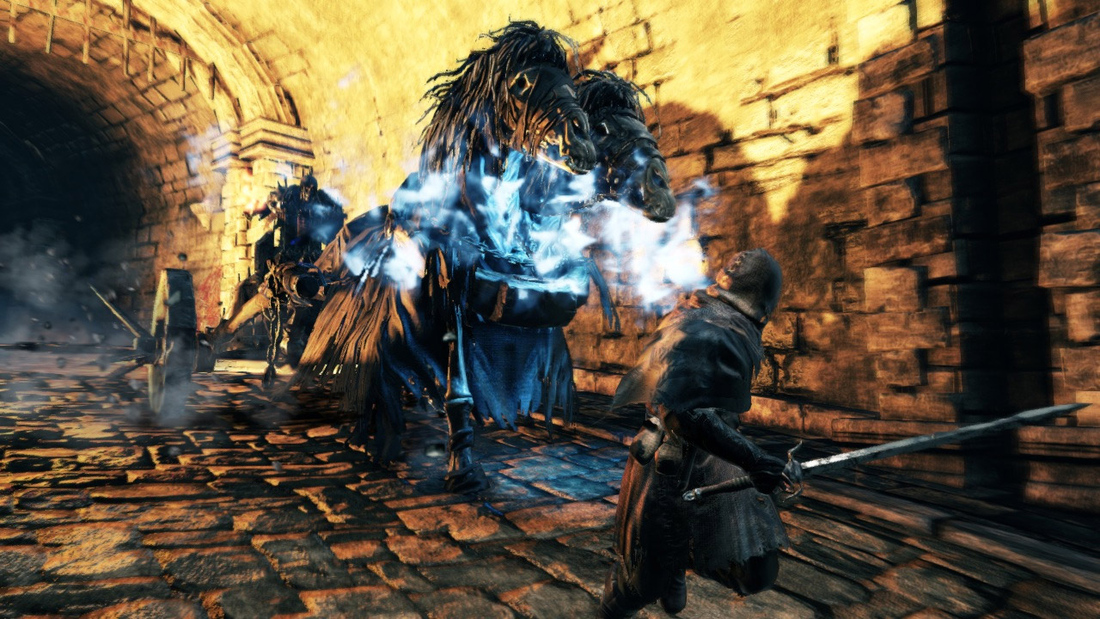 The area available in the beta includes access to at least one boss fight against the Executioner Chariot, a battle that involves respawning skeleton soldiers, necromancers and the relentless demonic chariot itself. It's the two-headed zombie horse terror seen in Dark Souls 2's concept art and briefly in a previous trailer. It's a stressful, memorable boss fight that's good enough not to spoil. It also resulted in two of the most amusing deaths that I and my co-op partner, Griffin McElroy, experienced during 90 minutes with the beta.

We really only scratched the surface of the Dark Souls 2 beta during our hands-on time. That was in part due to the extremely difficult nature of the demo, which throws more than a few black phantom versions of regular enemies at the player. Tanimura said he expects players to spend many hours in the beta before they exhaust its content.

The demo offered a peek at a few noteworthy additions and changes to the Dark Souls franchise. There's a new consumable attack item, the Witching Urn, which acts like a magical grenade, and at least one new cooperatively oriented spell, War, which boosts the attack and defense of you and your allies. Dark Souls 2 also introduces a new player character attribute, agility. According to the game, agility governs "swiftness of movement" and boosts the speed of evasion, blocking and other actions. At least one other character attribute is slightly different. Dexterity now boosts poison and bleed effects, according to its description.

Humanity from Dark Souls has also been completely removed for the sequel.

Some of the changes coming to Dark Souls 2 give the impression that From Software wasn't satisfied with certain gameplay mechanics or their technical implementation in the first Dark Souls. Others changes seem designed solely to take players out of their comfort zones, to layer new challenges on top of familiar ones. Finding new, inventive ways to make Dark Souls 2 difficult but fair is something fans of the series will likely appreciate, but we'll have a better sense of the reaction to From Software's fiddling with its formula when the network test beta comes to PlayStation 3 next month.