Pokemon X and Y deviate from the series' classic formula when it comes to its story: rather than accept Pokemon from a professor and be given marching orders at the very start of the game, players will instead get all they need right off the bat from their new group of friends.

During a hands-on demo of Pokemon Y, I was able to play through from the beginning up to the first gym. Players will start off with the classic first choice — "Are you a boy or a girl?" — and customize how their character looks. From there, it's off on your very first Pokemon adventure, but this time it's not to a professor's lab. Instead, new trainers will head out to meet up with four other neighborhood kids who are also setting out to do the same.

Over coffee in a pretty little Parisian-style cafe, players are given their starter Pokemon and the Pokedex from one of these friends. The quartet then explain what X and Y's professor, Professor Sycamore, expects from them — travel the world and fill up the Pokedex with information on new Pokemon.

Pokemon X and Y director and franchise veteran Junichi Masuda told Polygon that the decision to shake up the classic formula — going to the professor, picking a Pokemon, traveling alone and occasionally battling against one main rival — in order to heighten focus on the games' key theme of bonds. These bonds, Masuda said, are between Pokemon and their trainers, but also between trainers and their new in-game group of friends. These friends will travel alongside you as you move through the Kalos region — a journey that will hopefully mirror players' experiences in sharing their game stories and battling with other friends playing X and Y.

"This time we really wanted to make it a journey about you and your friends," Masuda said through a translator. "When you first meet the kids at the beginning of the game, you don't actually know them, so you're meeting them for the first time. But one of the central themes of Pokemon X and Y are bonds — the bonds between people, and the bonds between people and Pokemon, for example. When focusing on this theme, we wanted to make [the game] a journey about meeting these friends and then getting to know them over the course of the adventure."

Masuda added that Professor Sycamore is also a deviation from the more "traditional" Pokemon professor. Sycamore is studying Pokemon's Mega Evolutions, one of the new combat elements in X and Y. Sycamore, Masuda said, will often ask favors of people rather than do things himself, like having the friends deliver the Pokemon to players. Later in the game, he will even challenge players to a Pokemon battle.

X and Y will include all Pokemon from all previous games, offering the largest selection of Pokemon in any of the series' titles. But only specific Pokemon have Mega Evolutions; older Pokemon — like Mewtwo, Lucario and the Generation One starters — will have Mega Evolutions, but Pokemon newly introduced in X and Y will not. Pokemon must be holding a special Mega Stone when they head into battle in order to utilize their Mega Evolution, which is a temporary state that ends along with the battle. But why not make these transformations permanent?

"Mega Evolution works the way it does is for a variety of reasons," Masuda explained. "Another main theme of Pokemon X and Y is evolution, and I think the concept of evolution is the defining characteristic of [the Pokemon series]. When we were developing X and Y, we were thinking about what new things we could do with this — I talked with the graphic designers and the battle designers to come up with a good idea. What we came up with was a form of evolution that would only last during battle but would also require the Pokemon to hold the Mega Stone. 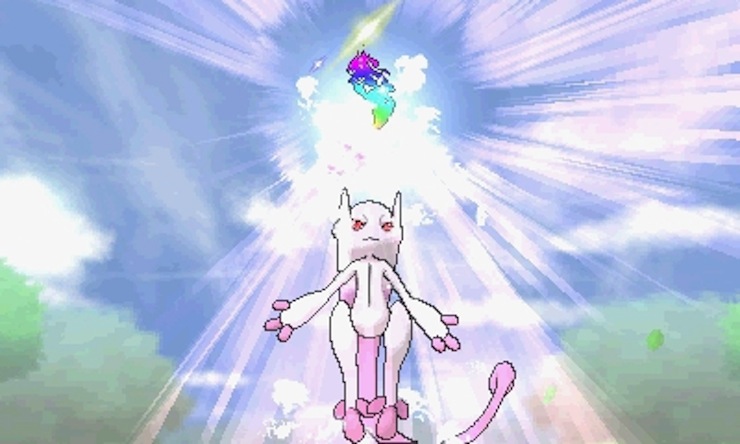 "By requiring the Pokemon to hold the Mega Stone, it prevents it from holding any other item in battle that may come in handy or play to a certain strategy," he added. "Since you don't know what your opponent is holding, you kind of have to guess their strategy, especially if it's a Pokemon that can Mega Evolve. What this does is it adds a strategic depth.

"We felt that temporarily going to this extreme level and then coming back to normal would be more interesting [that it being constant]. Also, from a gameplay perspective, if we just added another level of permanent evolution, the Pokemon would just become too strong and that would destroy the balance of the gameplay."

As for including Charmander, Bulbasaur and Squirtle in the game — when you first meet Professor Sycamore, he will give you the choice of one — this wasn't always the plan, Masuda said. But after seeing the designers' ideas for what Mega Evolutions of these three Pokemon would look like, the team knew they just had to include them.

"Originally I didn't plan to put them into the game [as starters], but the Red and Blue starters have always been really important to us," Masuda said. "And I knew that I wanted to give them Mega Evolutions, so I gave the direction to the designers. When I saw the designs that they came up with, I thought they were very cool and I wanted to give players the opportunity to get ahold of these Pokemon — and because in Red and Blue you receive the Pokemon from a professor, I felt it would be fitting to receive them from a professor [in X and Y] as well.

"It also fits well with the story," he said. "The professor in X and Y is researching Mega Evolutions, so it all just kind of matched."

Pokemon X and Y features several notable cosmetic changes as well. While the game's overworld is not in 3D, battles are, with each Pokemon's attacks and reactions taken to a higher visual realization. Pokemon also make more natural sounds; instead of using previous games' unnatural squawks that made the creatures sound more like fax machines, the Pokemon have been given a real voice. Pikachu even says, "Pika pika!"

Players will also notice that they have the ability to make their character run, allowing them to get around on foot faster. Masuda said this was a personal addition, something he decided to do after being out-walked by residents while visiting Paris.

"I am a fast walker, I was always a fast walker," he said, laughing. "But in France, I noticed people were walking much faster than me, and it came to mind to make the character movement faster than in previous games."

But some things still haven't changed, and this is a good thing. Capturing Pokemon and battles all follow the same core actions, and some NPC dialogue is still playful and at times unhinged. For example, a fellow shopper in a Poke Mart chirped at me without prelude, "Bags are mysterious! Bags are great!"

This time around the game's UI and bottom screen options have been packed with more stuff — not overhauled, just jammed with more to do. Players can train individual Pokemon in Super Training minigames, rub their tummies and feed them in Pokemon Amie, or find friends online to battle and trade. All of these options, Masuda said, were packed together to cater to the audience's unique and varying play styles.

"We really wanted to design it so people could find their own play style — for example, with Pokemon Amie, we designed it for people who just really want to interact and play with their Pokemon and pet them, and they'll probably keep the bottom [screen] on the Pokemon Amie screen [at all times]," he said. "For others that like to play online, they'll just leave it at the Player Search System screen. I do think that people stick to a specific play style at specific times. "

Development of this UI and all the different activities, as well as a need to pick up the game's pacing, were a core focus during the game's development, according to Masuda. In a world where it's very easy to find quick-fix gaming experiences, the team needed to find a way to let players be able to get short-term enjoyment out of the game while still sticking with their training and battling for the long haul.

"In Japan, one thing I really noticed, especially among middle school students, is everyone is really busy," he said. "They're writing blogs, going to real life meetups with friends, using Twitter, Facebook, playing mobile games... They just have a lot of different entertainment options with a variety of media. It just feels like a lot of people these days don't have a lot of time.

"There are a lot of free games out there, and if you get bored it's easy to just switch to something else — we really wanted to make it constantly interesting and engaging."

"One of the things we focused on with Pokemon X and Y was to really speed up the pace, up the tempo a bit, and make it more of a brisk-paced adventure and make it easier to raise Pokemon," he said. "There are a lot of free games out there, and if you get bored it's easy to just switch to something else — we really wanted to make it constantly interesting and engaging."

Now that the world of Pokemon is becoming more detailed and expansive — the Kalos region is a believable, massive area populated with highly-detailed and colorful environments, characters and sound — it may seem that bringing the games to more graphically powerful home consoles is the natural progression. But Masuda said the leap to Wii U is not in the cards.

"The series was built around the idea of trading Pokemon, trading these creatures, and everything we designed about the games was based on that concept," he explained. "That trading aspect was also to promote communication between people, and really, you need the handheld to be able to go places in real life, meet people, easily trade and battle with them. I think that's the reason we designed them on the handheld; it's really important to Pokemon."

Pokemon X and Y will launch worldwide on Oct. 12, but even with launch day fast approaching, I had to ask: will The Pokemon Company or Game Freak ever think about a new Pokemon Snap title?

"Personally, I really love the Pokemon Snap game, but it wouldn't be interesting if we just released the same game, how it was before, for the Wii U or 3DS," Masuda said. "So we have to come up with a new idea or something that will make it more appealing to players. Sometime down the road, we may have something."