The Legend of Zelda: The Wind Waker designers contemplated having beams shoot out of Link's eyes

Share All sharing options for: The Legend of Zelda: The Wind Waker designers contemplated having beams shoot out of Link's eyes

During early development of The Legend of Zelda: The Wind Waker, Nintendo's character production team contemplated having beams shoot out from the eyes of characters in order to make use of their oversized anime features, it was revealed in the latest Iwata Asks.

According to Nintendo graphic designer Satoru Takizawa, both Shigeru Miyamoto and Takashi Tezuka stated the team "needed to supply a reason for the eyes being so big."

"Now that the eyes had gotten much larger, we wanted to make their facial expressions richer by increasing the number of patterns for the eyes and mouth. Partway through, we even talked about having beams come out of those eyes!"

The creation of "Toon Link" was part of an ongoing attempt to evolve the series, he says. The original design was created by graphic designer Yoshiki Haruhana who, according to Takizawa hit the team with the new Link "out of the blue." 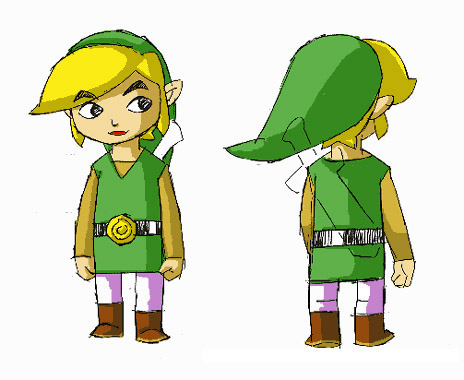 "The instant I saw that drawing, my designer's spirit came to life and I thought, "With a character like that, we can give him actions that will look and feel good no matter how he moves," said Takizawa, adding that highly-stylized design has more benefits within game development compared to photorealistic visuals.

"Another benefit of those visuals was how we could represent the mechanisms and objects for puzzles in a more easy-to-understand way. When the visuals are photorealistic, it had the adverse effect of making information difficult to represent game-wise."

You can check out the full Iwata Asks right here.