Share All sharing options for: Crypt of the NecroDancer pairs roguelike dungeon crawling with DDR rhythm

Brace Yourself Games has created an unlikely genre pairing with Crypt of the NecroDancer, a dungeon crawling roguelike played with beat matching rhythm game mechanics. It's the first roguelike — that we know of, anyway — that supports Dance Dance Revolution pads as a means of control.

Navigating the procedurally generated dungeons in NecroDancer is simple. Just step on a directional arrow in the direction you want your warrior to move (or attack). In the roguelike tradition, you'll face randomly spawned enemies, like slimes, bats, skeletons and dragons, and encounter traps, treasure chests and soft walls your warrior can dig through. As you dance through NecroDancer's dungeons, you'll acquire new armor, weapons and healing items.

Players can also cast spells by using a combination of button presses. Step on both horizontal arrows and your warrior shoots an enemy-frying column of flame from his sides. A vertical combo casts a freezing spell, putting enemies on ice for a few seconds. Up and left lets you heal.

Beats come into play in a few ways. NecroDancer has "forced turn duration," the developer explains, meaning that the duration of each turn lasts until the next beat. Dance well, and the floor of the dungeon will light up with a disco effect. Keep your turns going on-beat, and you'll be rewarded with better gold drops from enemies. There's even a hardcore mode that forces you to stay on beat. Miss a single step, and you're dead. 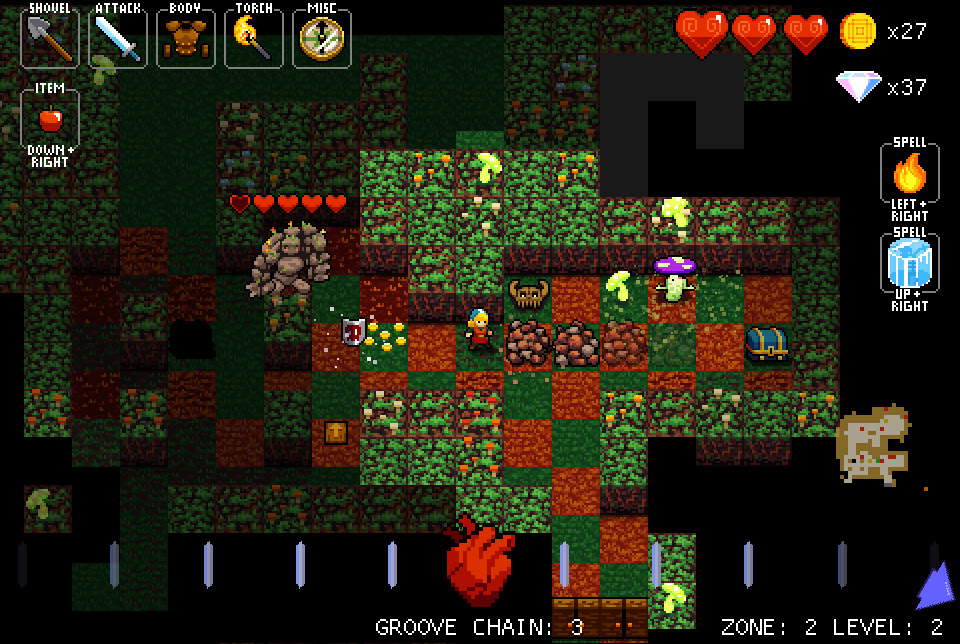 My feet-on experience with NecroDancer was a brief one. After getting the hang of the game's dungeon dancing and slaying a few slimes, I found myself face to face with a dragon, who cut my play time short. Another PAX attendee, who just happened to be a veteran DDR player — and who told me he owns his own metal dance pad — blazed through five levels of dungeons before ultimately being killed by a zombie conga line.

Roguelike players who don't have a DDR controller have another option. NecroDancer supports keyboards, so players can flex their rhythm skills with arrow keys.

Crypt of the NecroDancer features a soundtrack from composer Danny Baranowsky (Super Meat Boy, Canabalt) that's appropriately dance-y. The game also allows players to import their own MP3s. The software will detect the beats-per-minute automatically, but players can also calibrate their custom songs should NecroDancer's beat detection fall short.

NecroDancer is scheduled to be released on Windows PC and Mac through Steam. Early access to the game is expected this year, with a spring release window next year targeted by the developer. For more details on the game, check out our video interview with pixel artist and animator Ted Martens.