Oh, the difference a month makes.

In August, Capcom Vancouver showed off a new in-game demo from the studio's upcoming Xbox One launch title, Dead Rising 3; a demo that, for all its charms and over-the-top zombie killings, suffered from some pretty significant framerate issues. Producer Mike Jones promised that the studio was working directly with Microsoft on optimizing the game to solve the issue — fortunately, that promise appears to be one Capcom plans to keep, as those issues weren't present in the demo shown off at TGS 2013.

"If you saw it at Gamescom, we got a new drop from Microsoft literally that week, so you're seeing optimizations happening right now," Jones said. "We're in the midst of beta and final optimizations and polish — absolutely, we've got the game frame-locked at 30."

Even when hordes of zombies grew massive, and the means of their disposal became flashier and gorier, the demo didn't experience the same framerate drops seen at Gamescom. What's more impressive is that the game's latest demo also showcased how co-op play would work in the series' next installment — even with two players chewing through groups of zombies, the framerate stayed smooth.

The second player will control a marooned trucker named Dick — a near clone of Dead Rising 3 protagonist Nick — who has all the same capabilities as player one. When players are brought into a host's game, they'll bring all the progress, unlocks and stat customizations from their own game with them. There also aren't any restrictions on what they can bring back, either — experience earned, weapons found and blueprints discovered in the co-op game come back with you after you leave the host. 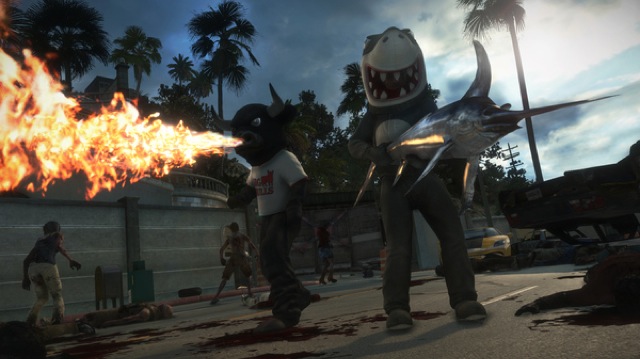 What's fairly progressive about this co-op is how it lets players progress through the campaign in a non-linear manner, since co-op partners can take story progress back with them too. For example, if you're only on chapter two of the Dead Rising 3 Story Mode campaign, but you help a friend complete chapter five, you can jump right ahead to that chapter when you return to your game. Or you can just stay where you are in your own timeline. You could also just skip chapter five once you reach it in your own campaign. It's entirely up to you.

That campaign-hopping — which isn't available in Dead Rising 3's Nightmare Mode, which carries the demanding timer prior entries in the series are known for — won't lock you into branching storylines you didn't want to go down. The host of a co-op session makes the big story choices, but when you take that progress back to your own campaign, you can replay the branch, and choose to go in whatever direction you wish.

"There's so much more stuff to find and explore that you don't want to be on a timer."

It's a completely open experience, tailor-made for players who took umbrage with Dead Rising and its sequel's hard time limit. But fans of that restriction aren't left in the dark, thanks to the deadline-based Nightmare Mode. By having both, Jones said, Capcom Vancouver is able to satisfy everyone's sensibilities.

"A lot of people, modern tastes are just like, 'Dude, I just want to jump in for 15 minutes, fuck around and not worry about what I'm supposed to be doing," Jones said. "'I just want to have fun.' So, we decided the only way to achieve that was to break it apart and make the two separate modes. We tried to design one mode where you have a timer when certain missions start, but then you have these sandbox times, but it still felt like the sandbox times were kind of prescribed.

"We felt like the only way to do this was to just have a classic Dead Rising mode, then an open-world, play at your own speed mode, that way you can enjoy playing co-op and explore the amount of content in the game," Jones said. "There's so much more stuff to find and explore that you don't want to be on a timer."

Dead Rising 3 will launch exclusively on Xbox One on its launch date, Nov. 22.