Swery's Kinect-powered D4 is just as bizarre as you expected

Share All sharing options for: Swery's Kinect-powered D4 is just as bizarre as you expected

D4, the Xbox One exclusive episodic mystery game from Deadly Premonition creator Hidetaka "Swery" Suehiro, shows that the eccentric director hasn't strayed from the outlandishness that made his last title a cult classic — in fact, if the TGS 2013 demo I attended today is any indication, he's leaning into it in a big, big way.

D4, which stands for Dark Dreams Don't Die, plays out something like an adventure game. It follows the time-traveling plight of David Young, who is able to travel into past memories using objects called Mementos, in an attempt to solve the murder of his love interest — and, perplexingly, to try and prevent that murder to change the future. This causal conundrum was only the 20th or so strangest thing about the demo, so try and keep up.

The player interacts with everything in these transportive flashbacks using Kinect voice and motion controls — there is an option to play with a regular controller, but Swery said it's optimized for Kinect, which some sequences in the demo certainly stood as a testament to. Players can change their view of the room by swiping, and can interact with objects in the environment in a number of ways; by making a grabbing motion with their hand to interact with the object, or by forcefully nudging a character in the world, for instance.

Young is interacting with the environment to search for clues to solve that murder, but not everything is going to turn up evidence. You have to be careful what you interact with, as Young has a stamina meter that's drained every time he manipulates something. If you run out, Young faints, returning to the present. It's not a hard limit to the investigation, though, because Young can refill that meter by eating food he finds in the environment, or that he purchases using in-game credits earned by completing objectives.

Young also has a "Vision" ability — activated by touching your temple — that highlights important objects in the environment. This, too, can be refilled by interacting with the right things; for instance, after splashing his face in a bathroom sink, Young regained a bit of his Vision (but at the cost of some stamina). 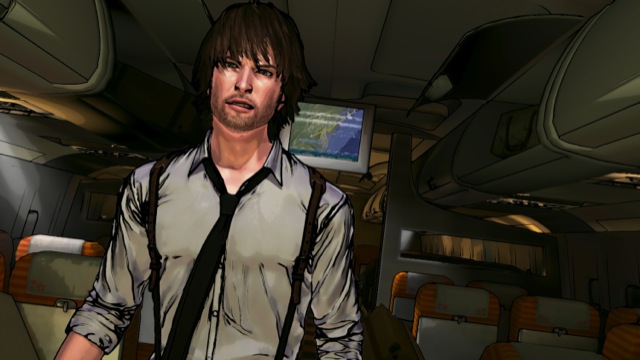 All the motions can be performed while the player is sitting, as D4 really only tracks the players hand gestures and fingers. Some require a bit more effort than others: Many of Young's interactions are Heavy Rain-esque motion commands, while some — like a cinematic fight scene full of quick-time events — may require a bit more flailing. The game also supports voice controls; for example, when given dialogue options, you can say a line out loud to deliver it rather than selecting it with a controller.

Our demo saw Young hopping into an airplane in transit, where he summarized his objectives out loud while incongruously poppy music played in the background — a page taken directly from Deadly Premonition's book. The oddities that followed were innumerable: Young continuously pops bubble gum that gets stuck in his beard during conversations. There's an extended scene where a smuggler with a fake eye pummels an air marshal for nearly a minute while nobody does anything.

At one point, apropos of nothing, a fashion designer named Duncan stands in the aisle to comment on how drab the coach's quarters are before repeatedly voguing with a mannequin.

Young picks up a megaphone from the ground, which you use to deafen your opponent by screaming at your Kinect

Young begins fighting with the smuggler in a series of timed QTEs which, if performed correctly, allow Young to dodge blows while escorting passengers to their seats, evading drink carts and storing overhead luggage.

There are also "Synchro Stunts" during these events that require you to recreate actions with a bit more fidelity. An obvious maneuver has you strike a fighting pose, then throw punches at your opponent. Slightly less obvious is when Young picks up a megaphone from the ground, which you use to deafen your opponent by screaming at your Kinect.

Odder still: The smuggler picks up a baseball — why are all these things on the plane? — and tosses at Young, which you must hit back at him using the leg of the aforementioned mannequin as a bat.

If you worried that Swery's next effort would be toned down under publisher Microsoft Studios, you can rest easy, because that fear is completely unfounded. That demo might just have been the strangest 20 minutes of video game I've ever seen in my entire life.