Share All sharing options for: Yaiba: Ninja Gaiden Z is a bloody mess

The Ninja Gaiden spin-off being developed by Team Ninja, Spark Unlimited and Comcept, action game Yaiba: Ninja Gaiden Z, shares little resemblance to the rest of the series. It's a cel-shaded, comedically gory hack-and-slash that, based on the Tokyo Game Show demo, trades high-speed action and finesse for ease of play.

Yaiba's similarities to Team Ninja's recent Ninja Gaiden games are few. It stars a ninja, Yaiba Kamikaze, capable of slicing his way through foes at an output of dozens of corpses per minute.

But in Yaiba, those enemies are primarily variations on the undead, from run-of-the-mill zombies to huge mutant creatures, like a giant decaying, two-headed toddler. Everything Yaiba kills spews forth copious amounts of bright red gore that sometimes obscures the action onscreen. Some drop body parts that Yaiba can use as weapons. A pair of amputated arms becomes a set of "numchucks," for example. Yaiba can also swing around a zombie corpse as a "Meat Slapper." (The game pauses at moments to introduce you to these moves and their names.)

The game's Tokyo Game Show demo — which appeared to be the same one present at E3 and cautioned that it was in a pre-alpha software development state — offered a peek at Yaiba: Ninja Gaiden Z's style and its protagonist's over-the-top anti-hero attitude.

Yaiba can use his sword to slash foes or punch them with his mechanical arm — which happens to be rocket powered. Players can charge up that arm, then unleash a thrusting, enemy-seeking punch that deals heavy damage. Yaiba's deadliest attacks occur when he goes into "Bloodlust" mode, a rage-induced time-limited frenzy that let's Mr. Kamikaze kill just about anything onscreen in one hit. 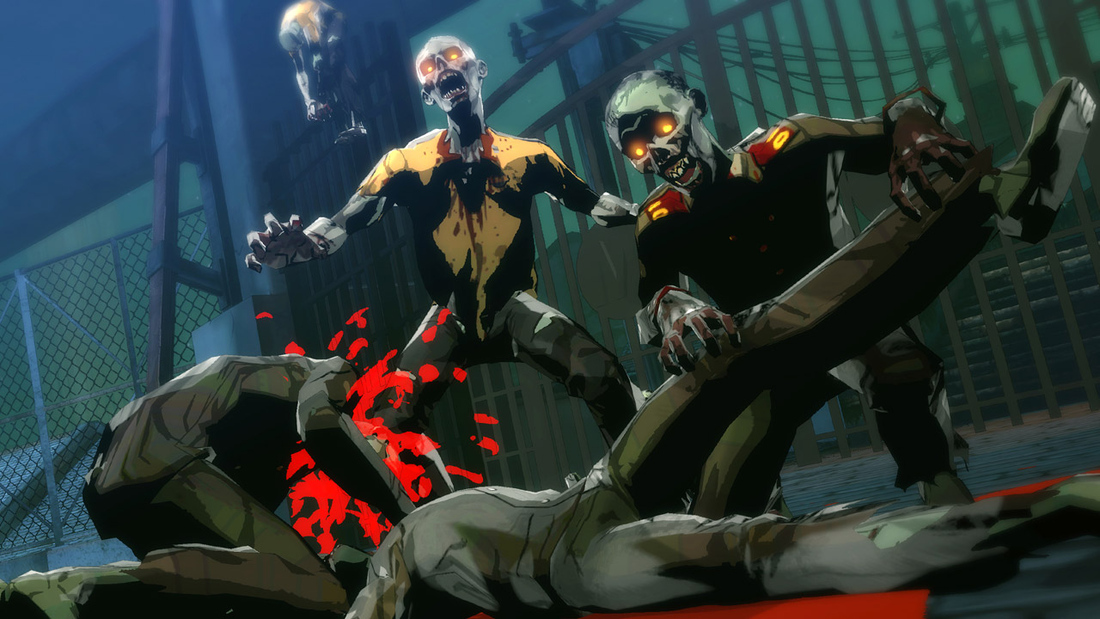 The TGS demo was packed with button-mashing combat against hordes of replenishing zombie foes, and a mini-boss fight against a flame-spewing demon, but Ninja Gaiden Z will also feature a few platforming moments, apparently. They're nothing deep or particularly challenging — a handful of button presses, maybe — requiring little in the way of quick-thinking to accomplish.

Less compelling was the game's light puzzle-solving. In one instance, Yaiba encounters a steamroller just a few feet from a Dumpster filled with zombies. Toss a zombie into the cab of the steamroller and he'll start it up and drive the machine through a brick wall. Later, there's a similar sequence where Yaiba is instructed to destroy a sex toy shop, again tossing a zombie into a vehicle. This time it's a tanker truck, which the zombie drives off a ramp, into the air and in-between a pair of giant pink legs that jut forth from the roof of the shop. See, the truck is a penis, if that imagery was too subtle. And when it explodes, dozens of panties rain down from the sky onto Yaiba, who stands laughing maniacally at the flaming underwear destruction he's just wrought.

To say that Yaiba's sense of humor and grating, gritty action anti-hero attitude are a turn off is an understatement. The comedy in the demo falls flat, as did — worryingly — much of the gameplay. Aesthetically, Yaiba: Ninja Gaiden Z at least manages to stand out from the Ninja Gaiden series' plastic action figure look, sporting a thickly cel-shaded style. That lends the game some visual personality — and serves as a highlight in the game's sharply rendered cut scenes — but can make some of the fast-paced action onscreen tough to parse.

Judging Yaiba: Ninja Gaiden Z's technical merits might be unfair at this point, considering the early state of the game, but it's worth noting that the camera was problematic throughout the demo. Ninja Gaiden games haven't had the most reliable of cameras over the past decade, but Yaiba's was rough enough to warrant mention.