Mouth-on with Food Practice Shooter, a game about eating vegetables

Share All sharing options for: Mouth-on with Food Practice Shooter, a game about eating vegetables

Tucked away at an unlabeled booth at TGS 2013 is a peculiar game that blends education, light gun shooting and the consumption of real-life vegetables. It is called, appropriately, Food Practice Shooter.

Food Practice Shooter, which was created by Dr. Takayuki Kosaka, whose prior work includes a pregnancy simulator (complete with body suit peripheral) titled Mommy Tummy, is designed to curb unhealthy eating habits in young people. It's one part nutritional science and one part psychology, all wrapped in a package that young people might be more willing to listen to than a traditional public service announcement — a simple shooter video game.

After a brief calibration session with the game's headset attachment, it prompts users to pick up an oversized light gun, which the player uses to blast away at hordes of attacking vegetables. The demo had three different pieces of produce — carrots, bell peppers and tomatoes — which corresponded to three trays of flavored biscuits in front of the player, and three different in-game ammo types. Every time you hit one of those enemies, your ammunition for their type would deplete; shoot a tomato, for instance, and you'll lose tomato ammo. If you get hit, the enemy that hit you drains their corresponding ammo type, as well. 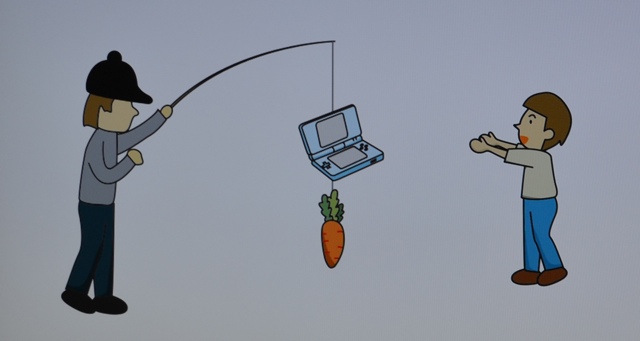 To refill your empty ammo stockpiles, you have to pause your game, holster your light gun and eat the matching flavored biscuit in front of you. Each tray is weighted, so Food Practice Shooter can detect how much you've taken; it also measures how much you chew that biscuit — using the aforementioned headset — to calculate a total to add to your ammunition.

Oh, also, you can't resume the game after eating those vegetables until you smile into a camera mounted on your light gun. Kosaka explained it was to form a sort of positive response; kids who don't like vegetables are more prone to changing their impression of them if they smile while they eat them. At the end of the game, the nutritional values of the biscuits eaten are presented to the player alongside their total score, giving them more positive reinforcement for eating foods they're probably not crazy about.

Check out the video below for a brief rundown of what Food Practice Shooter and its creator are hoping to accomplish.