Foul Play is a brawler with a flair for the dramatic.

A side-scrolling beat-em-up where you face off against hordes of enemies, Foul Play's gameplay is fairly traditional. But its style and theme are anything but, offering a campy, theatrical stamp on the genre. It’s pleasantly light-hearted, with enough character and spice to carry the production all the way through.

You play as Baron Dashforth, a "demonologist" and gentleman scientist from turn of the 20th century Britain. Joined by sidekick (and professional chimney sweep) Scampwick, you play through a number of staged performances — before a live audience — that detail Dashforth's adventures tracking down demons and punching them in the face. The setup is ridiculous, but it works and plays nicely into the combat system.

Foul Play is a traditional side-scrolling brawler with a few fresh tweaks. You battle across several discrete "acts," across five plays. In each, you face off against dozens of low-level enemies, with several bruisers mixed in, all fitting within the goofy supernatural theme of the given production. Each play has a boss character — a giant demon that represents the pinnacle of Foul Play's creative character design. In the best old-school tradition, each of these monstrosities has its own patterns to learn and two forms to beat before you can send it back to hell. 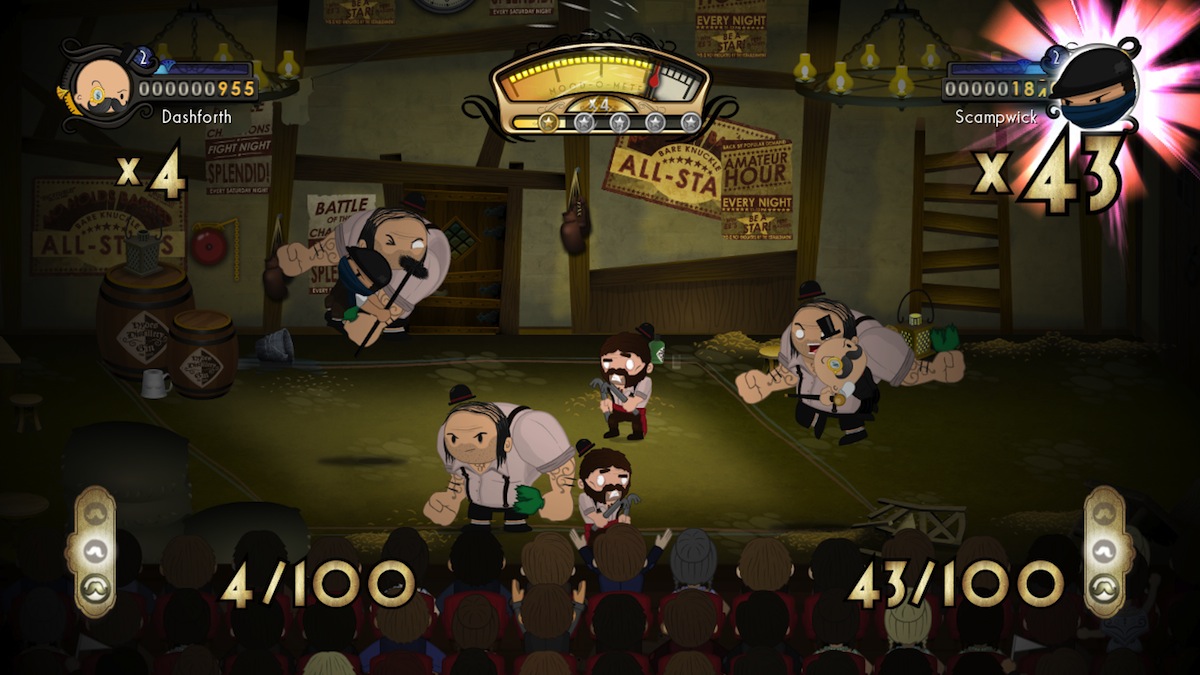 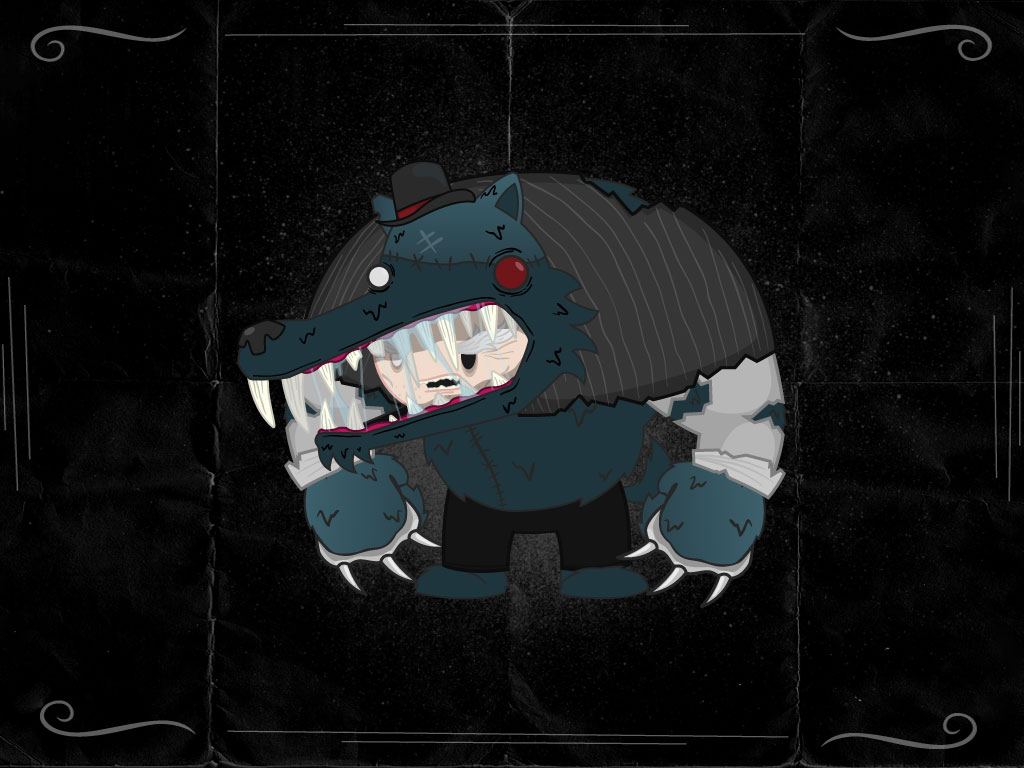 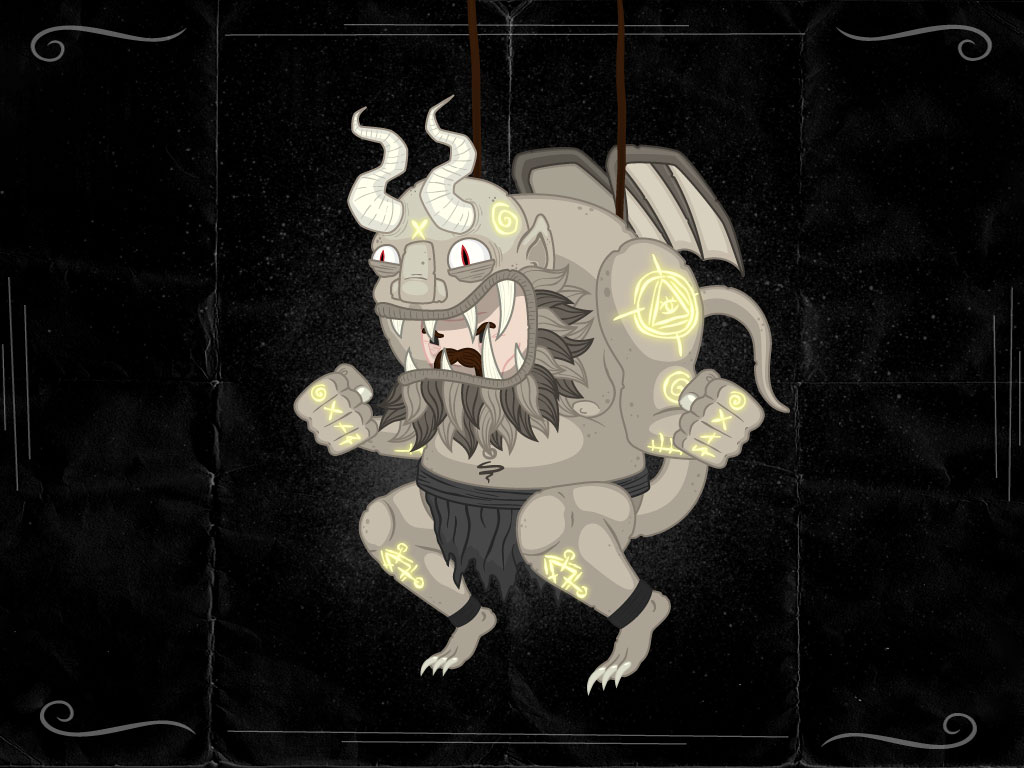 You start out with a smash attack, quick attack, parry/throw and dash maneuver, but quickly unlock new moves with which to unleash justice on enemies. Baron Dashforth is a nimble protagonist, able to take on massive groups of foes at once with impressive aerial moves and a nasty cane-whip technique. Combat found a nice rhythm once I mastered Dashford's throwing technique. I was able to pull off impressive chains, such as grabbing up foes, cannonballing them into one another, then chopping the group into a frenzy.

Foul Play differentiates itself from the pack with its combo system. Score — and health — are based on your mastery of chaining attacks together, which is nicely tied into the theater conceit. You need to keep your combo meter running in order to win over "audience approval." If your rating gets too low, it's lights out — and game over. Mechanically, it works well and keeps the action moving, and I appreciated the clever nod to the stage theme.

Baron Dashforth is a nimble protagonist, able to take on massive groups of foes at once

The need to keep your combo meter running lends a breakneck pace to the game at times — particularly if you are going for a high score or one of the many "challenges" that pop up over the course of the game.

Other sections require a more deliberate hand to master — if you go cane-blazing towards the tentacle demon, for example, you'll wash out every time. This variance in the pace — along with Foul Play’s unique aesthetic — kept me engaged throughout. 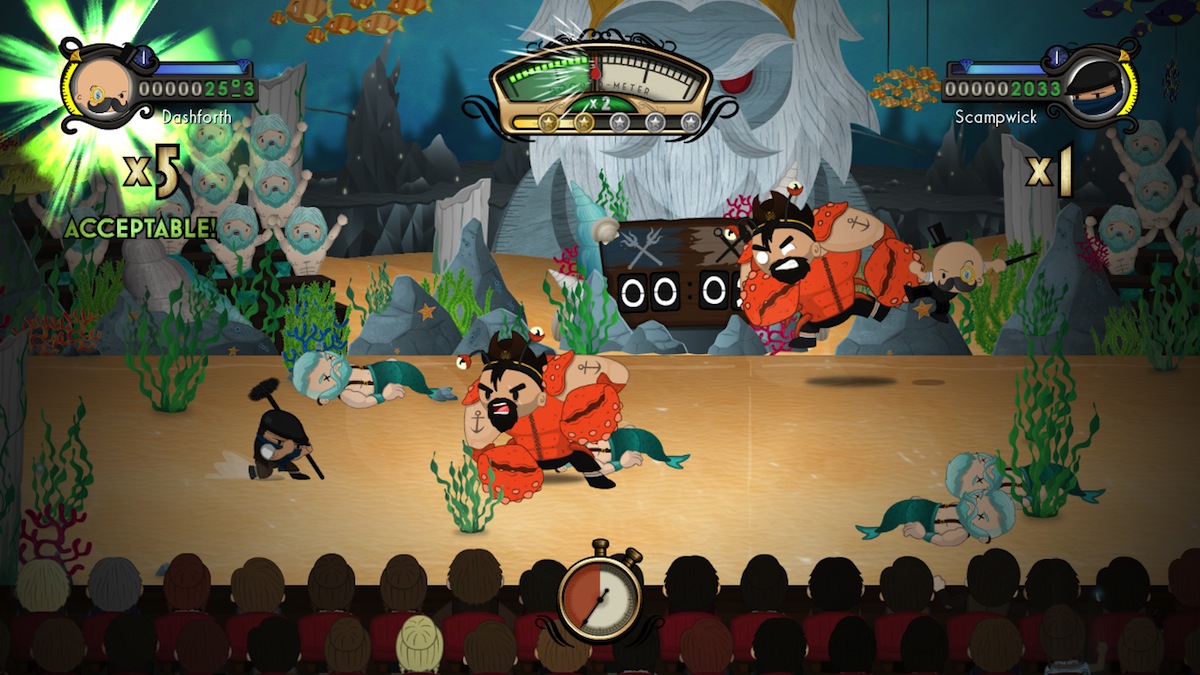 Foul Play's co-op mode — available locally or online — places one person in the capable boots of Scampwick. Played with a partner, Foul Play is even faster and crazier. Scampwick and Dashforth share an audience meter, meaning both partners need to pull equal weight (or at least not get hit) in order to successfully navigate the plays.

Foul Play's campy theme grew on me as I played through the game. While the over-the-top presentation made me cringe a bit at first, Mediatonic managed to work in enough sight gags and little visual touches to sell the concept. After a few minutes, I noticed that the supernatural creatures I was fighting were actually "actors" in ridiculous costumes, and they try to inconspicuously crawl off stage after you beat them. There's even a running gag where a stagehand continually finds himself in the scene, and scampers off out of the spotlight. The little details — if you notice them amid the chaos of battle, that is — made Foul Play's bizarre world a pleasant place to be in.

The sets themselves are gorgeous — expressive vistas meant to convey victorian pictures of ancient Egypt, stormy seas and oppressive castles. The characters express themselves in broad, theatrical gestures, often to adorable effect. Dashforth brandishes his cane to illustrate his point in the brief cutscenes, demons croak their last words as they fall ceremoniously and minor toughs scowl unconvincingly. I found myself drawn into the story far deeper than I initially expected to be, thanks to the art and animation.

Brawlers aren't always known for affecting storytelling and world building, but Foul Play's offbeat approach and goofy characters won me over. With sound combat and a score/health system that ties nicely into the theatrical theme, I enjoyed my time in Baron Dashforth's no-doubt polished shoes. Foul Play proves you donât need a dark theme or brooding atmosphere to enjoy beating the snot out of bad guys.