Review and information for FIFA 14

FIFA 14 wants to separate the champions from the also-rans.

It's a game defined by differentiation. This arises from two main sources: new mechanics and controls that unlock the potential that skilled players possess, and developer EA Canada's continued focus on competition.

But the most remarkable aspect of FIFA 14 might be found in the studio's attempts to maintain FIFA's status as the most accessible simulation sports game on the market.

FIFA 14 introduces a few new gameplay features this year that combine to emphasize raw talent on the pitch, and it results in a clear differentiation between athletes' skill levels. Player movement now takes momentum into account. In practical terms, players are no longer able to bend the laws of physics to their will while navigating past opponents. While sprinting down the field, I had less control over the ball, and wasn't able to stop or turn on a dime while maintaining possession — unless I was controlling a world-class footballer like Leo Messi.

When playing as one of the best soccer stars on the planet, the momentum-based movement in FIFA 14 serves as a tool to embarrass defenders with. New controls like the ability to quickly change direction while sprinting allowed me to pull off the same highlight-reel moves that only those guys can.

Once I got close to the net, I saw some notable improvements in the way players attempt to score. FIFA 14 contains a much greater shot variety than ever before — not just in the options you have as a shooter, but also in what happens when you kick the ball. It's never been more important to put yourself in the best position to take a shot, because being out of position has a material effect on the quality of the shot. 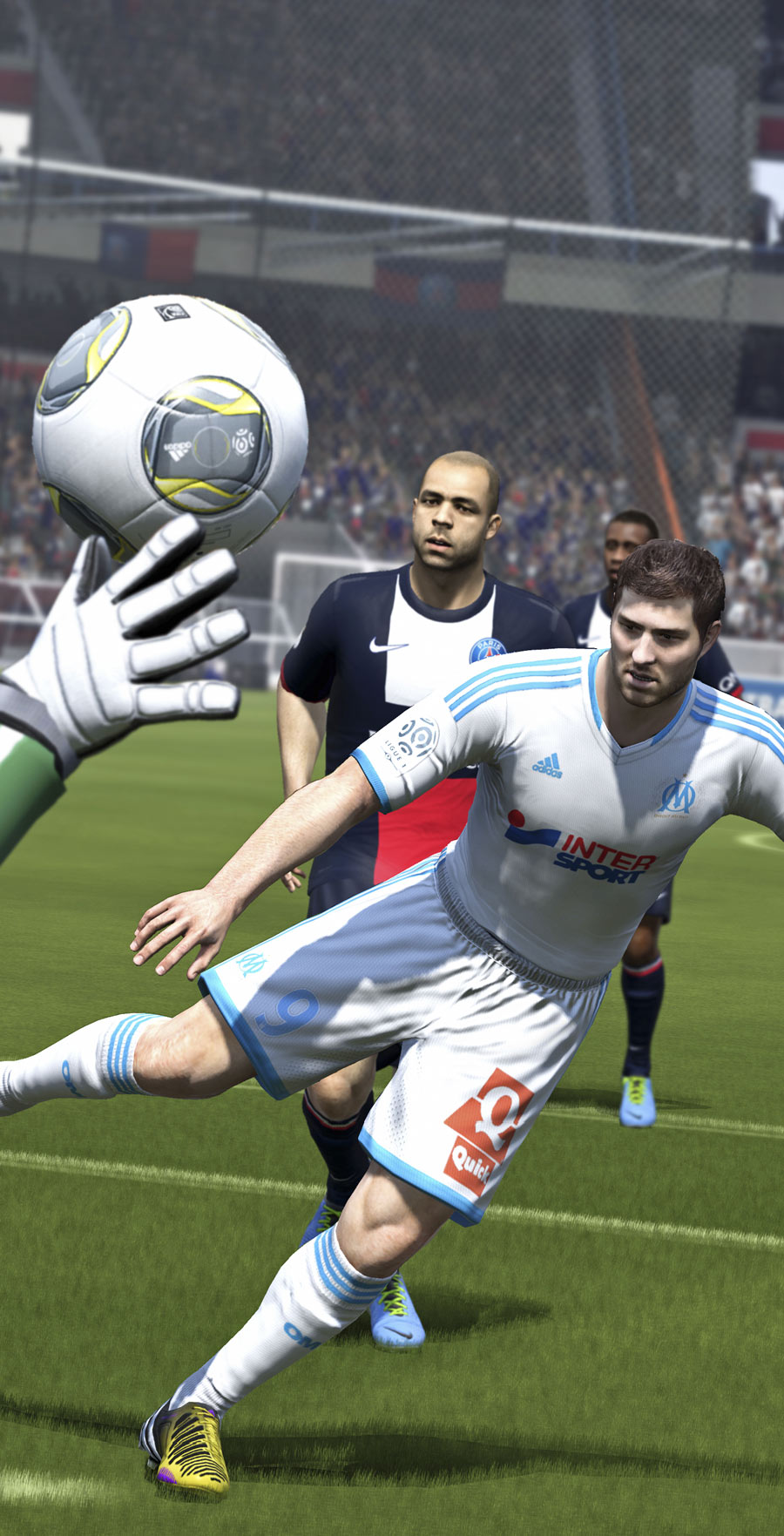 I frequently disobeyed that advice, and as a result I failed to cash in on a lot of golden scoring opportunities. Sometimes I was moving in one direction to gain separation from a defender and attempted to shoot across my body; sometimes I tried to put some finesse on the ball with a weaker player who simply couldn't handle the degree of difficulty.

On the other hand, skilled scorers have the ability to put the ball where they want, however they want. I fired a laser beam into the corner of the net with Karim Benzema and felt like I couldn't have done the same with a lesser striker. I also loved seeing subtle movements like players moving a foot slightly to get it right behind the ball; those small touches help make the AI feel more lifelike.

The AI is also smarter and better this year, both on offense and defense. Through numerous matches in the single-player career mode, I almost never felt like my computer-controlled cohorts were holding me back. They got me the ball in positions where I could do something with it, and created space when I needed them to get open. EA Canada also remedied last year's defensive AI failings — my teammates stepped up to the challenge when they were tested near our net, and rarely even surrendered shots, let alone goals.

While I began my career on Arsenal FC in the Premier League, the club quickly sent me out on loan to build up my skills on the Football League 1 team Colchester United. I flourished there, leading the league in goals and leading the club on an undefeated streak. We eventually went up against Arsenal in a Football League Club match, and I was struck by the stark contrast in competition. While we managed a 1-0 victory, it was a hard-fought win — at the outset the commentators called it a David versus Goliath battle, and it felt like it. My career mode's Football League 1 contests paled in comparison to the speed and skill Arsenal exhibited in that match, which is the way it should be.

I most enjoyed FIFA 14’s career mode and spent most of my time there, but it's also the sole area of the game that can sometimes feel under-explained. I was able to handle the career of an athlete just fine, but as something of a soccer novice, I found myself overwhelmed when I tried on the manager mode.

The new Global Scouting Network challenges you to think like a manager would as you send a team of scouts around the world to find talent. Instead of searching for players by one metric, their overall rating, you select adjectives to give your scouts an idea of the kind of athlete you're looking for. I wanted to shore up my defense with a physical presence, so I told them to find a center back who could be described as "tall" and "strong."

Since the mode opens with the summer transfer window, I was soon inundated with requests from other teams to acquire my star players. The transfer screen does provide some commentary on the offer from a club adviser, but I would have appreciated some kind of primer on the way leagues and roster transactions work in soccer, similar to what's present in the NHL series' Be A GM mode and MLB The Show's Franchise mode.

Thankfully, FIFA 14's career mode — and indeed, everything in the game — benefits tremendously from an overhauled interface. The tile-based menus within modes elegantly deliver relevant information, and I never felt like I had to flip through too many screens to get where I wanted to go. The main menu's tiles are dynamically updated depending on recent selections. If you play a lot of the career mode, the most prominent tile will be a big "continue career" button, but if you've just come out of a bunch of online matches or FIFA Ultimate Team, the interface will give you those options on its home page.

The improved interface is a boon particularly to Ultimate Team, since it's such a heavily menu-based mode. Ultimate Team isn't my cup of tea, but EA Canada continues to make strides in building the mode to be more inviting and easy to navigate (and thus, easier to spend your money in). And FIFA's Skill Games mode remains the most comprehensive, well-designed tutorial in a sports title, nearly unparalleled in its ability to teach you how to play the game and ensure you're having fun all the while.

FIFA 14 does a terrific job of differentiating levels of soccer competition around the world, which is rare. But there are so many different modes of play that players of just about any skill level or familiarity can hop into FIFA 14. For a sport Iâm still learning, that accessibility is FIFA 14âs most impressive accomplishment.

Our review of FIFA 14 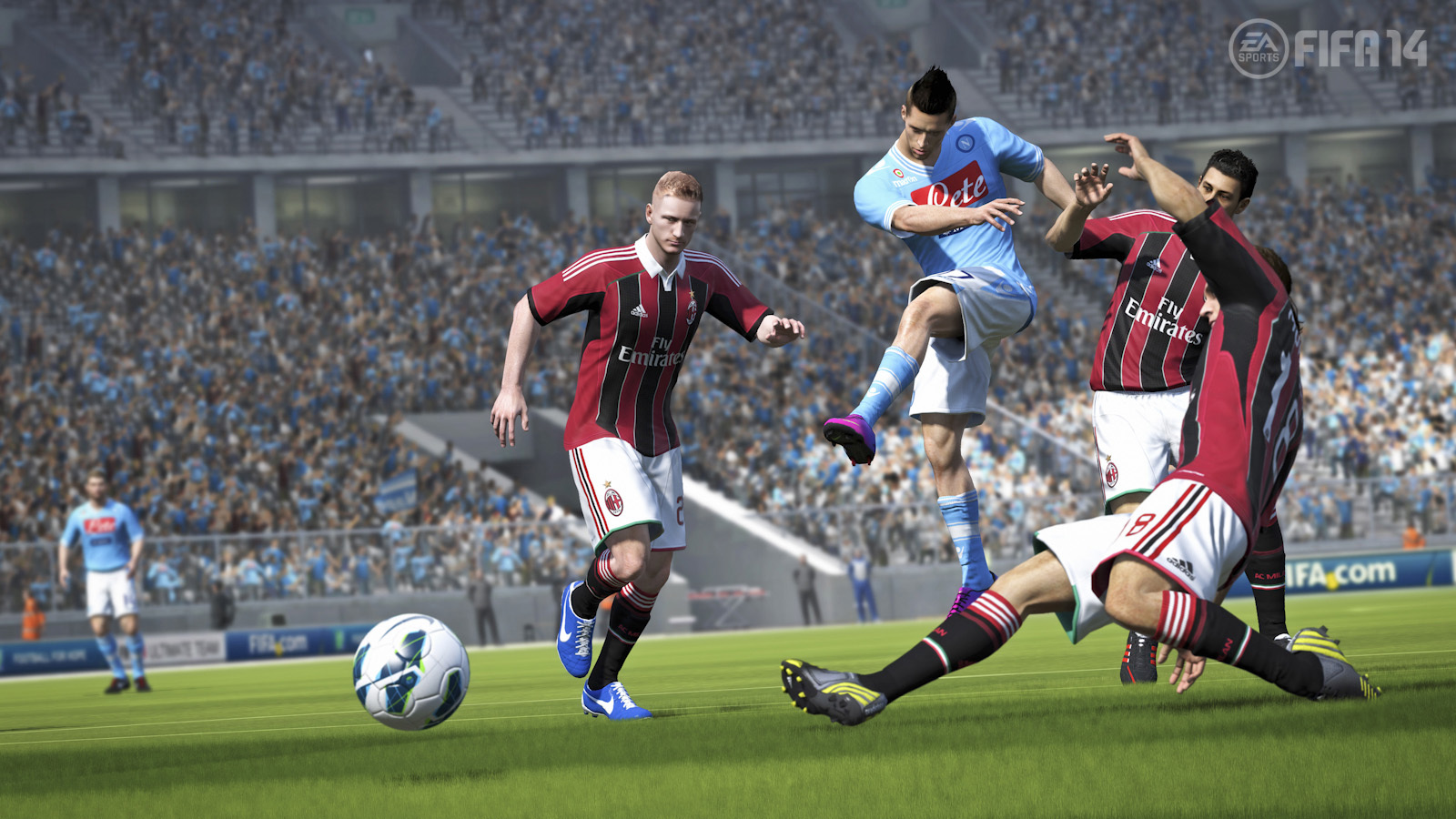