Under the hood of Infamous: Second Son's hyper-real Seattle

Share All sharing options for: Under the hood of Infamous: Second Son's hyper-real Seattle

Developer Sucker Punch is going to great lengths to ensure its next-gen debut, Infamous: Second Son for PlayStation 4, believably portrays its hometown of Seattle, Wash. From the locally sourced sounds of birds chirping to the inclusion of recognizable Seattle landmarks (the Space Needle, the monorail, an iconic car wash), there's a carefully manufactured sense of place in Second Son's Seattle.

As open-world superhero playgrounds go, Sucker Punch is focused on recreating its native city with a level of detail that borders on obsessive.

"You can see it when you walk around the streets of both the real city and our city in Second Son that they share [the same] identity," said Nate Fox, Infamous: Second Son game director. "And because it feels real, when you add in superhuman powers, you believe that they're real as well. And that's the thing — powers are why you're playing the game, not to take a trip to Seattle.

"When going to the PS4, we knew we would have the power to make a city that felt totally real"

"It's my home, but it's a good place to have a superhuman adventure. We were really excited to make really cool looking rain-slick pavement and weather effects that would look awesome."

During a recent visit to Sucker Punch's growing studio, the developer offered us a behind the scenes look at Infamous: Second Son, a game built on next-generation technology and starring an all-new hero.

Sucker Punch's version of Seattle is a mix of painstakingly authentic and referential — the developer licensed logos and signs from regional businesses, like the locally famous Elephant Car Wash. It features a faithful recreation of the city's Space Needle, its monorail system and locations like Pioneer Square. Mt. Rainier looms in the distance. Even Sucker Punch's own Seattle-based studio is hidden somewhere in the game.

"We chose to set the game in Seattle because, well, we live here," said Fox. "I look at the Space Needle everyday. And when going to the PlayStation 4, we knew we would have the power to make a city that felt totally real." 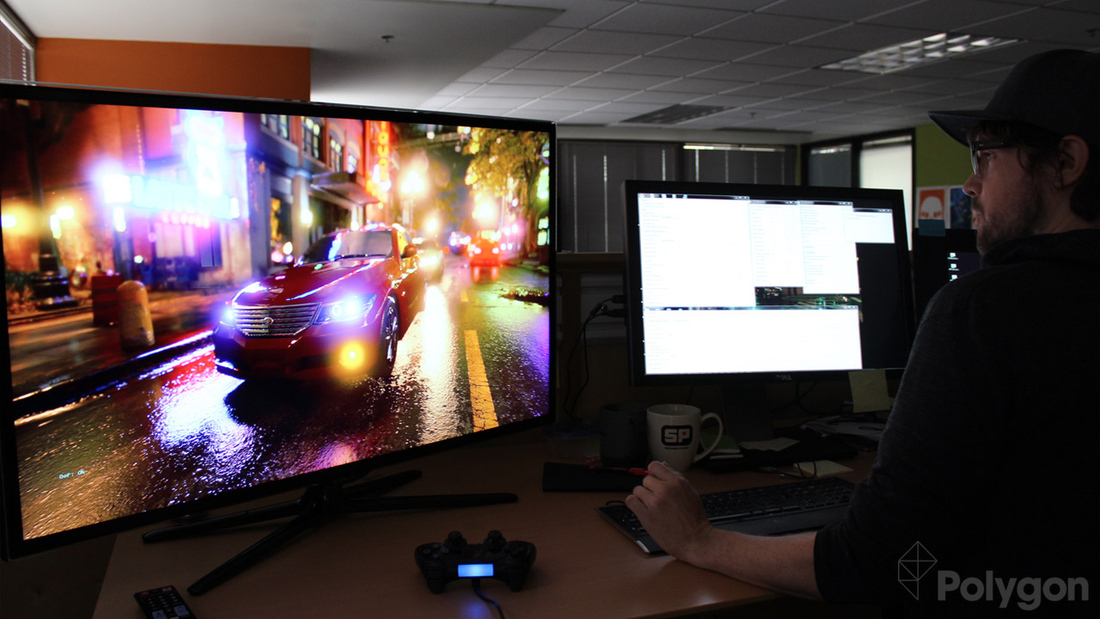 Fox said the developer wanted to explore the real Seattle, armed with audio recorders and cameras, to accurately recreate their hometown. The game's city is bordered by forests that feature regionally accurate flora, including evergreens modeled by ex-landscapers, populated by local fauna. The chirps players will hear in Second Son's woods include the calls of Seattle-area robins.

Complementing Second Son's Seattle are original flavors based on local cultural icons, which can be seen in the coffee shop chains Squatch Brew and Latte Owl Coffee. (No Starbucks, though.)

Game designer Jaime Griesemer calls the actual layout of Sucker Punch's in-game Seattle an "abstraction" of the real thing, but more grounded than the fictional cities of Empire City and New Marais of past Infamous games. "We can do a lot more nuanced portrait of the city in Second Son," he said. "Since Seattle is not laid out well for gameplay, we're more going for the vibe ... the mood of Seattle."

"Origin stories are the best part of superhero fiction"

New lighting and graphics technology power the game's hyper-real Seattle, helping to bring the neon lit city to life. Sucker Punch showed off new reflection technology that powers the way light bounces off cars and wet pavement. (Sliders in Second Son's graphics engine let designers choose just how wet they want their Seattle streets, from bone dry to damp to black mirror-like fully saturated. Rain, it seems, is as persistent in the new Infamous as it is in the real Seattle.)

The choice of Seattle as the playground of Infamous: Second Son also informed the design of its Native American protagonist, Delsin Rowe. Fox says the decision to feature a character of Native American descent was a product of the game's setting in the Pacific northwest — and its story.

"Native Americans are part of the population here, so ... why not choose this guy to be the hero?" Fox said. "He comes from a smaller town outside of Seattle and he becomes part of this classic adventure story. It's, you know, the call to adventure. I'd be lying if I said this wasn't a 'hero's journey' story." 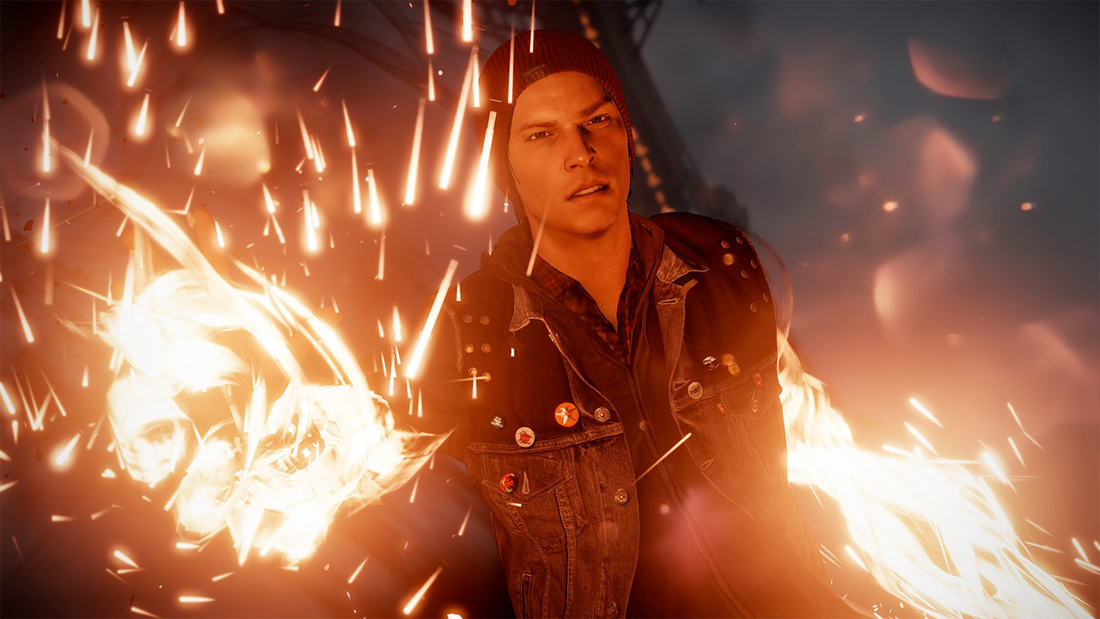 Delsin's story represents a fresh start for the Infamous franchise, Griesemer said, calling it an opportunity to welcome a new audience to the series. That was a crucial change as the series makes the leap from PS3 to PS4.

"We want to make sure that it doesn't feel like [PlayStation 4 owners] are tuning in for the final season of some show that's been running for 15 years," he said. "We needed a new entry point, and Delsin was the first step for that."

Fox said the decision to leave Cole McGrath behind was "kind of a sad thing, but also great." It was also a choice players of Infamous 2 helped Sucker Punch make.

"We looked at the trophy data from Infamous 2 and in that game we gave players a choice if they wanted to heroically sacrifice Cole and kill him, or selfishly keep him alive at the expense of humanity," Fox said. "I'd been thinking that the next game would be one where he'd stayed alive. And when I wrote the endings, that's the one that had the coolest set up for another game.

"This is going to be a different group of gamers than have played Infamous and Infamous 2."

"But the vast majority of the people went for the sacrifice. We thought, well, in a game that has this strong connection to choice and consequence, that we'd honor that as a franchise. I'm glad we did it because ... origin stories are the best part of superhero fiction."

Griesemer said the decision to move on from Cole's story came fairly early in the design process.

"Maybe it had been suggested before," Griesemer explained, "but there was definitely a pre-production meeting where I said, 'I don't want to step on anybody's toes, but what if it's not Cole?' We were at the point in the project where we could just do whatever [we wanted]. As we thought about it and talked to Sony, it made more and more sense. It's going to be new hardware, a new platform and we're going to have a new audience. This is going to be a different group of gamers than have played Infamous and Infamous 2."

The new hero of Infamous 3, as it was known at the time, would require all-new superhuman powers. One of Delsin's abilities, the ability to draw gas from neon signs — like the one outside Second Son's dramatically different take on the Crocodile Cafe — helped push the next-gen lighting tech and vice versa. 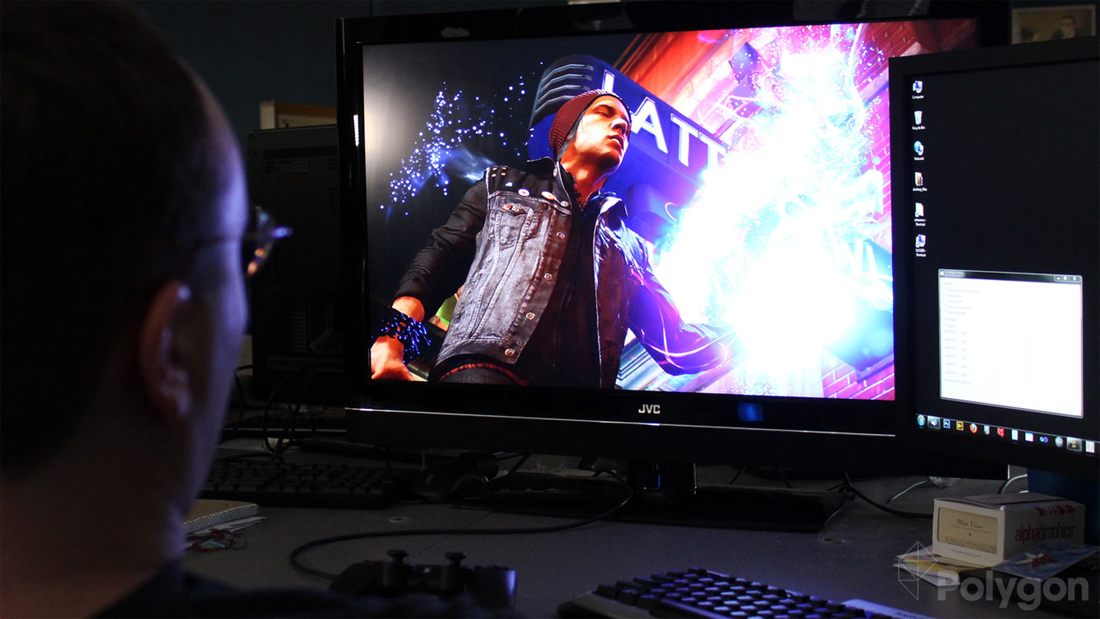 "After we [chose to put the game in Seattle], we started thinking about some of the powers that Delsin might have and guess what, we have beautiful reflective streets," Fox said. "Let's get some neon in there, in part because they look rad in the city, and also because they're everywhere, so let's make this a source of power."

Delsin's other revealed power is based on smoke and cinder, allowing him to fly through the sky in short bursts, travel through ventilation shafts and, in battle, attack with a smoldering whip.

"When we were looking at what Infamous was," Griesemer said, "one of the things that had been a theme throughout the series and we wanted to continue was the idea of modern elemental powers."

Delsin's superpowers draw on less common elemental powers, or at least interesting variations on established versions of those superhuman abilities, some of which are informed by the game's setting in Seattle. Don't expect him to have ice or water-based powers — either too rare in the case of the former and too common in the latter — or one-to-one equivalents of Cole's power set. No coffee-based powers either. It's an element too common in Seattle, Griesemer joked.

Sucker Punch is keeping Delsin's other powers under wraps for now. It's also remaining tight-lipped about the impact moral choices — whether the new Infamous hero will opt for good or evil — will have on the game. Infamous: Second Son is a chance for the studio to tell a new origin story (in its hometown no less) and welcome a new audience to its superhero franchise, wielding that great power responsibly.