Xbox One launch title Ryse: Son of Rome included a PvP mode before it was scrapped in favour of the Gladiator: Blood-Brothers cooperative mode.

"We jumped on the gladiator two-player co-op mode set in the colosseum," Crytek producer Mike Read told Polygon. "We tried the whole PvP thing but it really wasn't fun, so we decided to move it over to waves of gladiatorial combat; but there are no lions or tigers."

Read couldn't immediately share the details of why PvP was scrapped in favour of co-op, only saying that the short reason is, "we tried it out and it wasn't really much fun."

The Gladiator: Blood-Brothers mode is a multiplayer experience that relies heavily on players' ability to coordinate with their partner in combat and the exploitation of each other's execution perks. Two players must work cooperatively to survive rounds of enemies and complete objectives within a colosseum, as a cheering mass of spectators watch on. Wave types and order are completely random with every playthrough, with matches lasting from 10 to 30 minutes, depending on the difficulty. 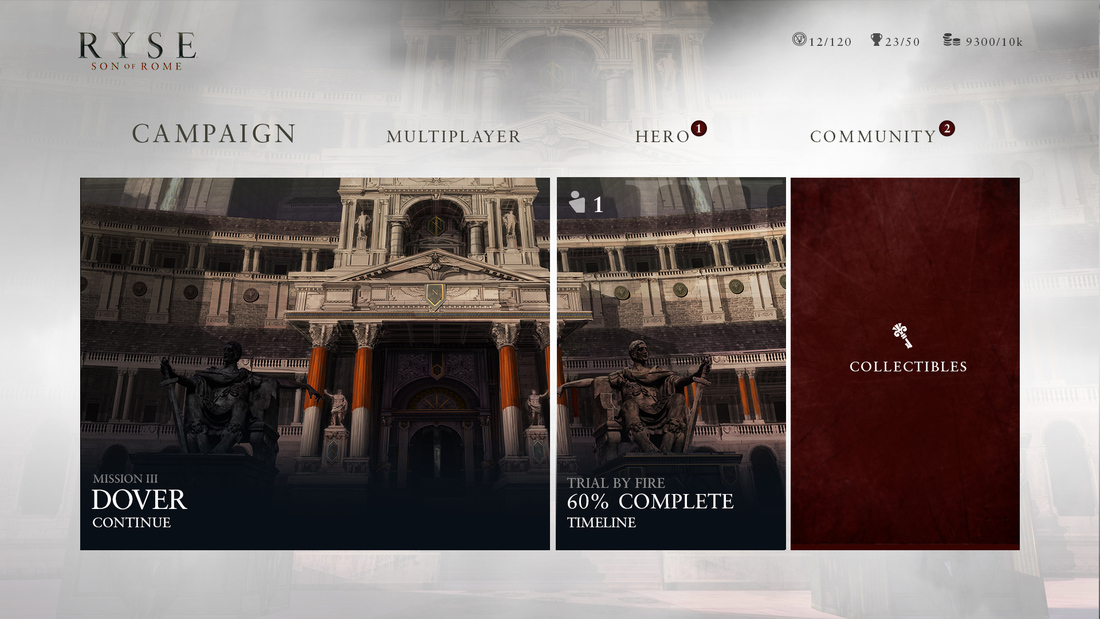 Read also demonstrated Ryse's integration with the SmartGlass for Xbox One app, which was revealed at E3 2013, where all of the title's in-game menu systems have been cloned into the app. Read explained that the companion app is not mandatory, that it is "more of an additive" so players don't have to back out of the game into the menu system.

"It is not a mandatory thing where you are missing out on something," he said. "So having this where it is sitting right in front of you, you can also access all of the other Microsoft [Xbox Live] menus while you are playing the game, so you can chat with people, not breaking [out of] the game."

Displayed as a timeline, users can also track their friends single player campaign progress in real-time, awarding gold if a player passes a friend's progress. Through a browsing feature, users can also explore video tutorials as well as video clips created by friends and shared via the cloud. Players can search, queue and start multiplayer matches through the app's SmartMatch feature, regardless if they are in the game or not.

"Say you are watching a movie and you say ‘Hey, I want to play a multiplayer match,' you can go into the app, start the process and it will automatically cue you in when it is ready," he said. "It is not a forced element we are not making you use it, it is just a good little addition."

Custom challenges can also be created via the app. In the demonstration, Read set up a 10 minute challenge consisting of a series of maps. He added in more archers, randomized the types of waves and set the expiration time for the challenge.

"So if someone wants more catapults or more archers, you can add these things in," he said.

Challenges can be set to public or private and users will be able to browse the user-generated content by length and difficulty. While completing challenges within a timely manner will award players with gold, Read said that they aren't sure if they'll give rewards for creating popular challenges.

The app's features also allows players to customize their gladiators, which is only multiplayer-specific, and manage items such as potions. Players can also make microtransactions.

"For instance, if I want to unlock an execution, I play a small video [to preview it] and then use my points to unlock it," Read explained. "We talked about with microtransactions and people got a little bit up in arms about what it was exactly.

"This is in a co-op environment, you can still earn all of this stuff by playing through the game, it was for those people who don't have the time and want the cool stuff," he said. "It is not like you are getting a PvP advantage."