Opinion: Waterboarding one person and killing 300 in Grand Theft Auto 5

Share All sharing options for: Opinion: Waterboarding one person and killing 300 in Grand Theft Auto 5

I'm not from California, but I understand it. I've lived there. I've visited. I'm there maybe half a dozen times a year or more. When I travel, half the time it's to California. So I get it.

California is a place unlike any in the world. It is uniquely and unapologetically American, and to many who live elsewhere, California is America. So much of our culture is tied to our entertainment, and so much of that entertainment comes from California. The connection is unavoidable. And I have to admit, growing up, I saw more of California on my television than my own native Texas. Every place I saw afterward, I compared to California.

They have called America the Great Melting Pot (before they built the fence) and, if that's true, it's more true in California than anywhere else. Everyone lives there, but no one is from there. Ich bin ein Californian.

Grand Theft Auto 5, then, feels like home. Meticulously crafted to be a scaled down, video game version of the Golden State, the game is part open world adventure, part nostalgia trip. It's California as you remember it if you're not from there. (And maybe if you are.)

From the bleak inefficiency of the LA freeway system to the quaint cool of Main Street towns along the PCH to the vibrant wondrousness of the Sierra Nevadas and the grim desperation of the Mojave desert, this game recreates California in all of its fictionalized wonder. Right down to the struggle to bring Football back to LA and the swarm of prostitutes in Venice Beach.

It's not actually California, of course. It's a video game world in which outrageous caricatures of people do outlandish things that simply aren't possible in our world. And this, as Chris Plante says, is why we love it.

For example, I spent the better part of an evening attempting to steal a fighter jet from a military base. My plan: ride a dirt bike down the side of a mountain and jump it over the razor wire fence and then through the base to the airfield, hop in a plane and go. The plan "looked good on paper," as one of the game's characters would say, but in practice, not so much.

The jump was the easy part. The dirt bike handled realistically, bounding over the mountain as dirt bikes do, then bouncing and slipping and sliding and behaving realistically with every dip and bump in the terrain. And when I hit that last ridge and sailed into the air, I soared over the top of the razor wire like Steve McQueen in the Great Escape, landed with a jolt, skidded, did a quick half-donut and then sped off in the direction of the airfield. It was glorious. It was also the end of the successful part of my plan.

The outlandishness of the feat itself (who would really ride a dirt bike into a military base to steal a jet?) was eclipsed by the near-reality of every facet of the interaction. The realistic behavior of the bike, the different traction on different surfaces, the pull of gravity, the struggle to get the airplane canopy unlocked (because you can't just bust the window out, because airplane), the accuracy and deadliness of the military's guns. When I was gunned down (repeatedly) just short of the runway, I felt the pain of defeat all the more intensely for having felt so engaged with the act itself. I will never actually know what it feels like to perform such a daringly stupid stunt in real life, but this facsimile was real enough that my heart — after two dozen failed attempts — was racing.

And yet, to me, what's more engaging than the near-reality of the game world's little details is the near reality of the game world as a whole. Beyond the recreations of realistic motorcycles and the painstaking homages to Southern California, what I find fascinating about GTA5 is the methodical dissection of everything else we take for granted. Through skewering America's most American state, GTA5 is actually skewering us all.

Take this scene some ways in: You're playing as Trevor and, alternately, Michael. You've been leaned on by the fictional FBI to kidnap a fictional CIA informant to get information from him (as Trevor) about another informant, who you must then assassinate (as Michael). Straightforward video game stuff, really. Until the torture starts. 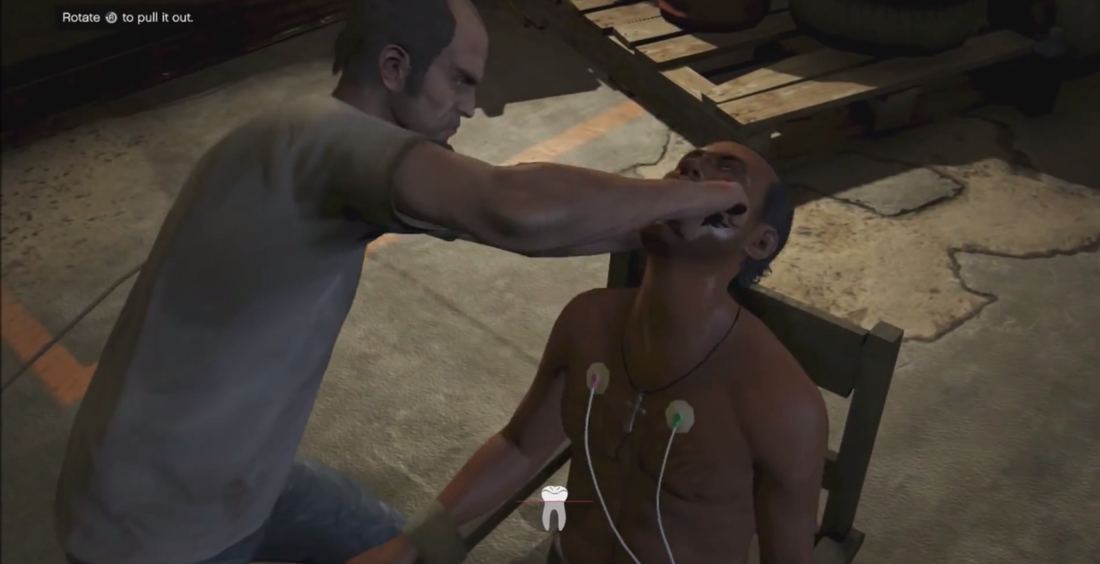 You are told to torture the captured informant and are then given the freedom only to choose with what instrument you will torture him. The actual torturing is conducted via button presses, while the sound of the man's heart beats emit from a nearby medical machine, and the rate of his pulse is transmitted via vibrations through your controller. You hear him screaming, begging for mercy, claiming he knows nothing. You hear the sound of his nipples sizzling under the electric shock from a car battery charger clamped onto them via your button presses, his bones breaking from brute force pummeling of a heavy wrench you swing, his moans as you extract a tooth by waggling a thumbstick and his gurgling as he is waterboarded — all at your hand.

Worse, this man is acknowledged to be innocent. He is a stereo installer. He is guilty only of having been in the home of the person you seek. He doesn't even know who it is you are looking for, or what this person has done. The man you are torturing has a family. Also, he's wearing a crucifix. He is not a terrorist or a criminal, he's just a man. He is in every way that could possibly matter (or be ignorantly argued to matter) undeserving of the agony you are inflicting on him. And yet you must torture him or your time with the game will come to an end.

This man is acknowledged to be innocent

This scene has been meticulously crafted, like everything else in GTA5, to deliver a specific and targeted feeling. Just like the highways and scenery are designed to provoke nostalgia for the state of California, and the motorbike physics are crafted to evoke the sensation of riding, this scene is designed to provoke shame. Perhaps regret. Maybe fury. But definitely and absolutely not pleasure. And it works.

What's, perhaps, most outrageous to some is the heavy-handedness of it. In a game in which the main point appears to be the ability to do almost anything anywhere, to be funneled into this one interaction is a blatant and deliberate slap in the face. It's a red, glowing sign, saying "experience this." It is the developer of a game in which nearly unlimited emergent fun is part of the bargain stopping you under a bridge and asking you first to pay the toll. And what a toll.

The scene is undeniably unsettling. Yet it is also an elaborate trolling.

The Grand Theft Auto series has, since its inception, provided detailed stats regarding how well or not you play the game, and GTA5 is no exception. The game compiles a mountain of detail about what you do and how you do it, down to what weapons you use to murder which types of people. That's why I can tell you exactly how many people I had murdered by the time the game asked me to torture just one. 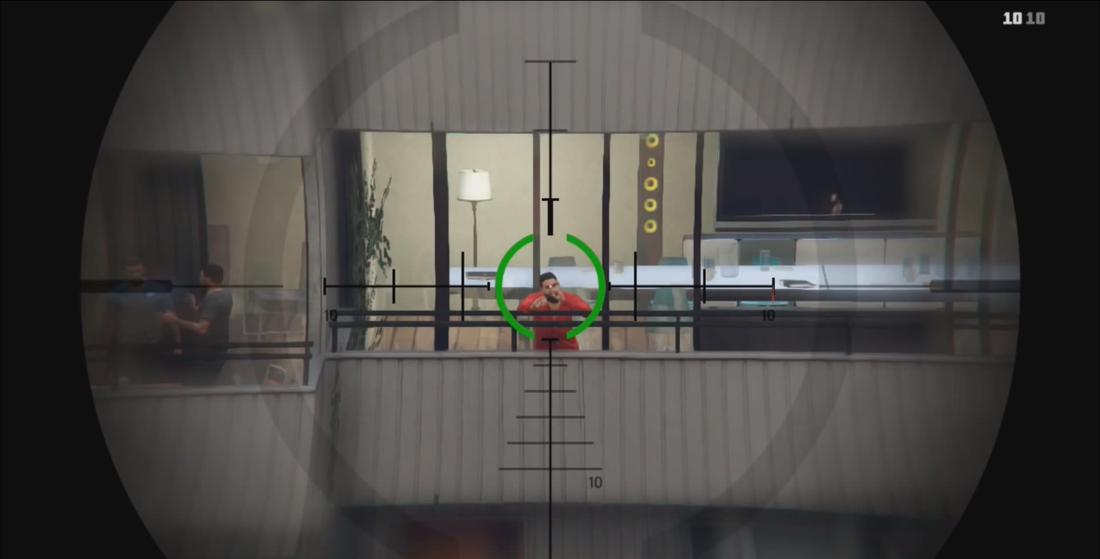 That number is 295. Which, coincidentally, is exactly the same as the number of people killed in Afghanistan in the year 2008. And by "people" I mean "our" people. Military casualties among soldiers conducting Operation Enduring Freedom in Afghanistan in 2008 numbered 295. That's a precise number, because military.

Civilian casualties during that period are harder to pin down because of the lack of infrastructure and general fog of war in that region. The UN has estimated that 2,118 Afghan civilians perished in 2008 as a direct result of the war. It's a notable number because it was the most civilian deaths on record for any year to date in that war, which is still technically going on. (The next year the number went up again.)

The total number of military deaths from Enduring Freedom currently stands at 3,380. Civilian deaths (as of 2011) at 14,770. Exact figures for insurgent or enemy casualties are impossible to come by, although some count those deaths among civilian deaths. And the UN stresses that their estimates are underestimated. Probably wildly.

GTA5 is once again a perfect recreation of America

Precision of record keeping aside, one can fairly say that many, many people have died in Afghanistan since 2001, and that those deaths are a direct result of US military intervention in the region. Whether that intervention is justified or not is not my concern here. The fact is, we went there and people started dying by the thousands. And the greater scandal to emerge so far has been over the torture of, perhaps, dozens.

In this respect, GTA5 is once again a perfect recreation of America.

The unavoidable torture scene in GTA5 works (to a point). You get your information and the assassination is completed as quickly as pressing a button — and is then forgotten. Meanwhile, the most outlandishly insane character in the video game's cast, the one who begins the game by stomping out the brains of a romantic rival and who conducts the actual torture of the innocent, then turns a corner and decries the tactic. That his well-reasoned rebuttal of the efficacy of torture sounds a lot like a conspiracy theory is simply more fuel for the troll fire.

Is waterboarding torture? And is it even effective in gaining information? These questions have answers, but those answers depend on answers to other questions. What's the meaning of "effective"? for example. And what's "torture"?

Waterboarding is not a new technique. It dates back to the Spanish Inquisition and it has been used by American soldiers and intelligence agencies for at least half a century. The Bush White House claimed for years that waterboarding a high-level Al Qaeda operative even yielded information used to stop attacks. Asking if this is torture, if it's effective and why you must endure exposure to the gruesome practice in a video game designed ostensibly to be fun are certainly valid questions, but they're not the right questions. 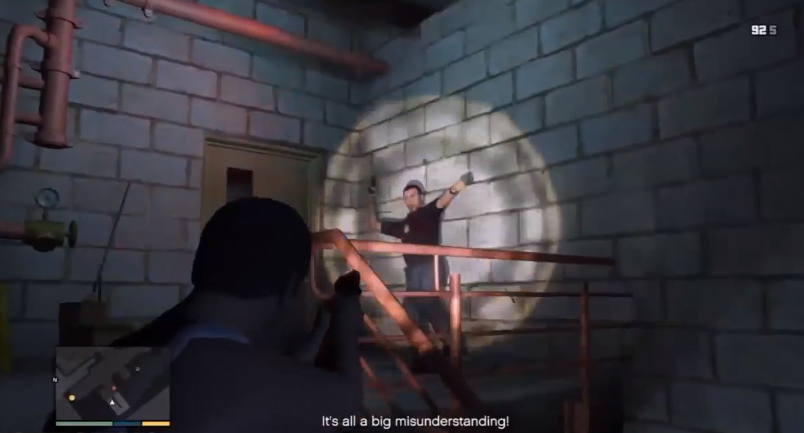 Let's look at another scene in GTA5, this one well before the torture scene. You're inserted into a CIA morgue in order to locate a body. You must then form and execute an exit strategy, and in GTA style, "exit strategy" means slaying everyone between you and the way home and then walking away as if nothing ever happened.

Playing the morgue scene, I was mildly disgusted. I wished for an option to escape peacefully without slaughtering the government agents who were just doing their jobs. And then, when I exited, I checked my body count and realized I had already slain many more. Policemen just trying to pull me over for causing an accident, or agents responding to my break ins at a government facility. I had been a willing virtual murderer of dozens of people before becoming outraged at having to murder a dozen more.

Similarly, the deaths of tens of thousands at our hands, as Americans, is something we've become inured to. Yet what we're far more concerned about is how torture makes us feel. If that's not a dead-on satire of the American experience, I don't know what is.