I'm all by myself playing Marlow Briggs and the Mask of Death.

So why am I not feeling too left out?

It's not because I'm playing the better game (I'm not) or because I'm a rebellious iconoclast (I'm not). But after hours with the dour GTA, it's refreshing to play a game that could not take itself less seriously.

"...I'm not exactly sure what happened at that point."

Firefighter Marlow Briggs is doing his best to make his long-distance relationship work. He goes so far as to take time out of his busy firefighting schedule to visit his archaeologist girlfriend at a dig site that's started to give her the creeps. And what does he get for his trouble?

Well, he gets killed.

Wait! Come back, that's not the end. See, the evil guys (who need Marlow out of the picture so they can kidnap his girlfriend and force her to decipher an ancient codex for them) made a mistake. They killed our hero with an ancient spear that...

You know, I'm not exactly sure what happened at that point (and I don't think the game is absolutely positive, either). So here's the short version: Briggs is reincarnated as the "Sacred Warrior" and is accompanied by a new buddy, The Mask of Death. He's a floating mask. Hence the name.

You can feel the game straining under the weight of this exposition. Like a 7-year-old who knows he can run into the sunshine and burn ants with a magnifying glass the moment his homework is done, it so desperately wants to skip to the killing. It's so anti-story, in fact, that it actually offers an Achievement to kindred spirits who skip every single cutscene.

You'd be doing yourself a real disservice hammering on that "A" button, though, as the goofy dialogue is one of The Mask of Death's greatest strengths. Banter between the mask and Briggs is particularly good, like when a giant squid prompts the mask to remark he's never seen so many horrible tentacles and Briggs promises to "show him some stuff on the internet" after their adventure ends.

With its affable hero and mystic mumbo jumbo, The Mask of Death is tonally situated somewhere between Big Trouble in Little China and The Last Dragon. But rather than a magic potion from Egg Shen or the power of The Glow, Marlow Briggs basically becomes Kratos, the pasty, mythical hero of the God of War series.

Much like his albino counterpart, Marlow is a whirlwind of murder, taking on multiple (and sometimes massive) enemies. As he kills his way through the hordes, Briggs can transform his ancient spear into swords, long-distance whips or a giant hammer. If he's able to string together multiple casualties in quick succession, he can pick up an XP bonus. It's all pretty standard melee action stuff, as are weapon-specific combos triggered by specific sets of button presses. It's all very functional, but never inspired. 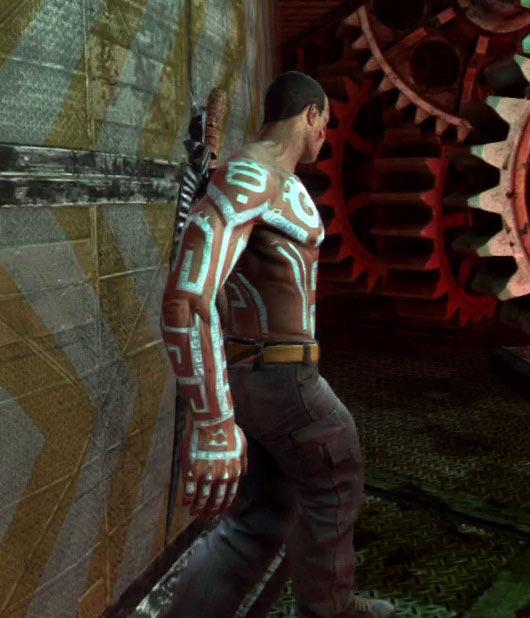 The Mask of Death is a floating mask. Hence the name. 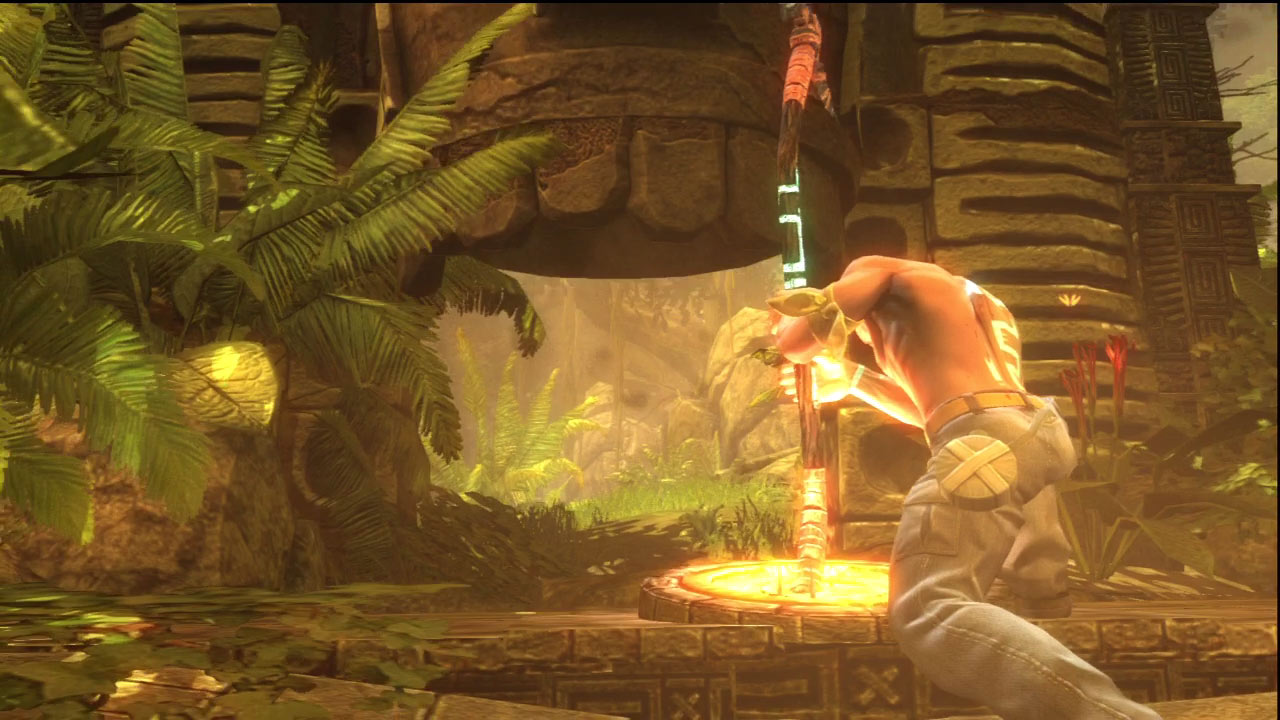 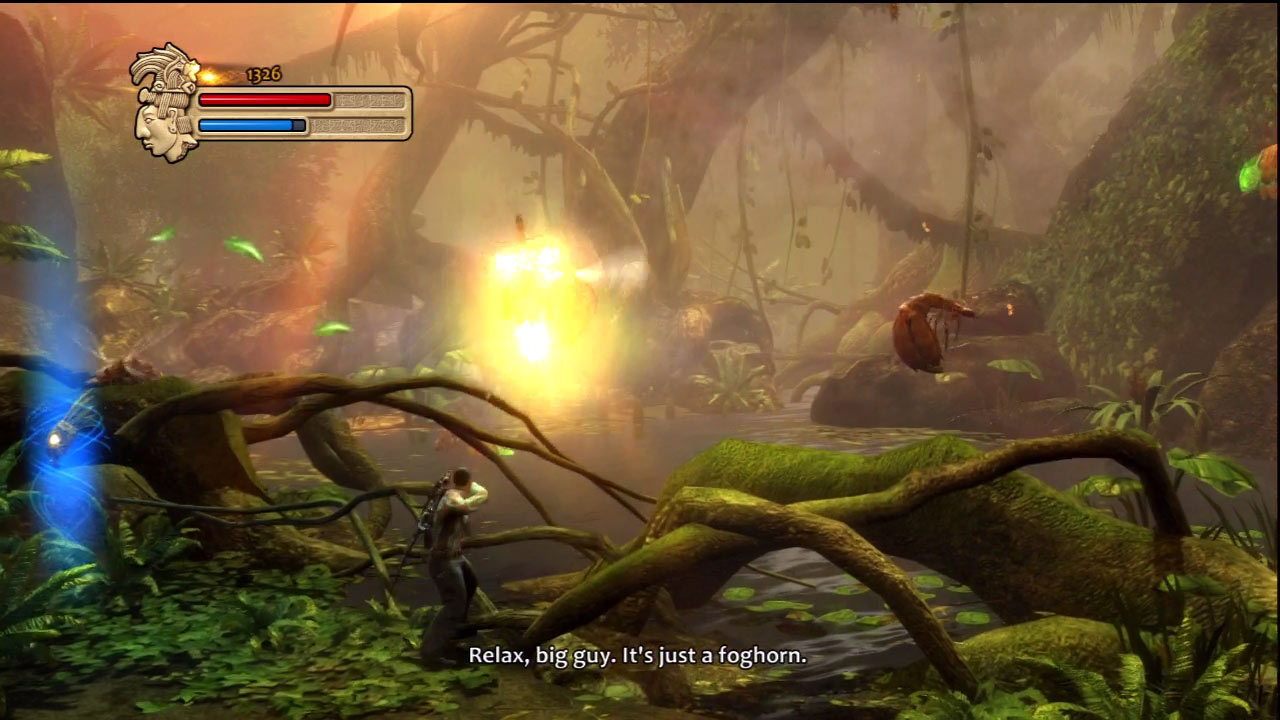 Marlow is also able to call screen-clearing blasts of magic — Briggs' ice spell sometimes prompts him to summon his inner Lil' Jon and shout "Aww sleet sleet sleet!" which makes it the best power in the game, obviously.

You have zero control over the camera (the right stick is used for quick dodges), which took some getting used to. But the vantage point on the action is usually perfectly adequate, and after a few minutes I stopped instinctively trying to adjust my view.

Though it is utterly unapologetic in its adoption of God of War's combat mechanics, The Mask of Death neglects to carry over any of its predecessor's refinement. It is steadfast in its refusal to engage with the left brain; you don't need to employ any strategy in picking which weapons or powers to use in specific situations. Maybe it's worried about getting your critical synapses back to sleep in time for the next sublimely dumb moment.

What it lacks in depth, The Mask of Death tries to make up with variety. Yes, there are obligatory turret sequences, but more interesting vertical-scrolling shooter bits and some twitchy platforming help to mix things up. Hell, even the credits sequence is a goofy minigame.

If you like, you can take on these challenges individually from the main menu and compare leaderboard times with the rest of the world — well, the infinitesimal percentage of the world that owns Marlow Briggs and the Mask of Death, at least. It's not a huge addition, but I'll be damned if I didn't jump right back in after I finished the game to see if I could improve my rankings.

Smartly, the game doesn't really linger on any one moment for too long, because none of its individual components are really great. In fact, a couple of the late boss fights and platforming puzzles aren't even good. But with the locomotive-like speed that The Mask of Death pushes you through its six or so hours of action, it's more like watching ugly scenery pass by than going completely off the rails.

Marlow Briggs and the Mask of Death is as silly as its title suggests. Its action could best be described as inoffensive. Its characters are shallow enough that toddlers could swim in them unattended. But it's so resolute in its silliness that it's also nearly impossible to dislike. Sure, it's an imperfect game, but amid the cynicism and midlife crises of other recent video gaming juggernauts, it was exactly the game I needed.

Marlow Briggs and the Mask of Death was reviewed using a retail XBLA download purchased by Polygon. You can find additional information about Polygon's ethics policy here.