Create-a-spy: Hands on with Codename Cygnus

Share All sharing options for: Create-a-spy: Hands on with Codename Cygnus

I played Codename Cygnus while sitting on my couch with my eyes closed. I played Reactive Studios' interactive radio drama while cooking dinner.

All you have to do to create a spy in your own image is listen and respond.

Reactive Studios took to Kickstarter earlier this year to fund its unique mashup of gritty spy dramas and mobile games, and it's opening salvo of the episodic adventure is available now on the iOS App Store. Polygon spoke with Jonathon Myers recently to hear the story of how he and his team made this "completely hands-free experience" happen.

It began with a love of serialized Saturday Matinees, like the kind that influenced George Lucas and Stephen Spielberg, and Sunday Flash Gordon comic strips.

"I don't want to say it's a lost art, because comic books still do that, " Myers said. "But I wanted to play around with that.

"When it came time to work on this project, we [asked], 'How do we start that as an iOS app?'"

The initial idea was to make a single episode, but they realized that probably wasn't sustainable. Codename Cygnus' basic mission structure grew from there.

When you load up the game, you're presented with a mission overview that shows both where you've been and where you're going. You play these sequentially, by beginning at a location, role-playing as a spy and gathering the information you need to advance the story.

The story unfolds like a radio drama. You're a James Bond-like covert agent, and you've got decisions to make. It pushes players toward pivot points at which you need to choose your actions by selecting among options and speaking your decisions. Will you be bold, for example, and equip yourself with a pen-syringe gadget to subdue your target, or will you be more secretive and slip a pill into your mark's drink? Will you be hostile or charismatic?

That is the whole of Codename Cygnus: immersing yourself in the theater of the mind and role-playing as the spy you create, choosing how to approach situations and enduring the cliffhangers at the end of each episode.

"This first thing we have available at launch is three episodes," he said. "It's kind of like a single arc, where you're up against your first nemesis."

Over those first three episodes, you're introduced to the cast of non-playable characters at Cygnus, the organization the protagonist works for, like Alexander, the constant voice in our ears who guides you through each mission. 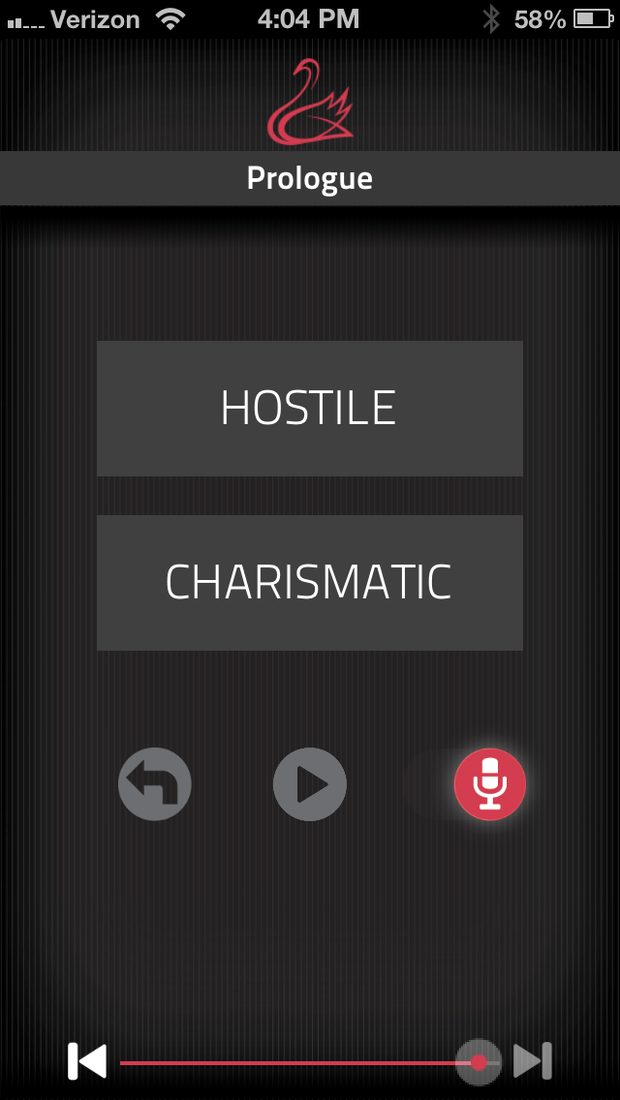 "The side quest missions are a little bit more character-focused, [about] exploring who these surrounding non-player characters are."

In episode four, for example, players will meet a character called Lazarus, who's played by Rob Wiethoff, best known for portraying John Marston in Red Dead Redemption. Episode five will be written by Mark of the Ninja writer Chris Dahlen.

Reactive Studios is still actively developing Codename Cygnus, and the game's future will be determined in part by player feedback, Myers told us. The developers are still figuring the game out, and they're open to making changes that will make the game better.

"We're doing this, in the sense that we're going to engage and see, 'What do people think?" he said. "How do people react?

"We'll be on the forums, asking people, 'What did you think of that?' And the idea is that we're going to take that and incorporate it."

Interested players can download Codename Cygnus from the iOS App Sore. If you like what you hear, you can always get in touch with the developers. After all, Jonathon Myers and Reactive Studios aren't just recording audio. They're listening, too.