Xbox One's ESPN and NFL apps give you sports on demand

Share All sharing options for: Xbox One's ESPN and NFL apps give you sports on demand

The highlight is what makes sports come alive, and Microsoft knows that.

With the Xbox 360's ESPN app, which debuted in November 2010 and was expanded two years later to include the sports giant's full slate of live programming, Microsoft demonstrated a strong focus on delivering sports through the console. Now the company is moving beyond that to bring Xbox owners the sports content they want to see, when they want to see it, through two apps on Xbox One: an upgraded version of the existing ESPN experience, and an NFL-specific app.

"It's been a partnership that has really given us an opportunity to learn about what makes sports fans tick, and what types of things they want to do with these types of devices," said David Jurenka, director of sports at Xbox Entertainment Studios, about Microsoft's collaboration with ESPN.

Speaking during a presentation of the aforementioned apps to Polygon last week, Jurenka explained that sports is inherently a highlight-driven affair: You can spend all day reading about incredible athletic feats, but nothing quite compares to watching a clip of a 108-yard kick return or a 450-foot home run.

That's why Microsoft is building its ESPN and NFL apps on Xbox One to leverage the console's hardware and other modern technology — including social media and cloud-based processing — to offer experiences designed with the interests of today's sports fans in mind.

Editor markup for Xbox One sports apps. This is only visible in the story editor.

During its Xbox One reveal event this past May, Microsoft announced a major deal with the NFL — reportedly worth $400 million over the next five years — that makes the company an official partner of the league for endeavors that will put an NFL app on Xbox One and Surface tablets on NFL sidelines.

The centerpiece of the NFL on Xbox One app is a live feed of NFL Network, the league's all-football, all-the-time cable television channel. That includes NFL RedZone, the channel that goes from game to game as teams enter the region inside the 20-yard line. In addition, the app brings in content from the NFL website, such as live scores and highlights. And finally, people who play fantasy football on the NFL site will be able to track their teams and leagues.

"rich metadata allows us to pull content from NFL.com"

As you can see in the images above, the app's tabbed interface allows users to watch content in a large main window while scrolling through other parts of the app in a sidebar. In the sidebar, the app can automatically display content that's directly tied to the main video. "The NFL has tagged most of these [NFL] Network shows with rich metadata that allows us to pull content from NFL.com that's related to [them], so if you're watching a show, you'll see related content that you'll be able to put in the preview window," said Jurenka.

The NFL on Xbox One also brings in curated NFL Twitter feeds and connects them with highlights once they're available. Say you're scrolling through Twitter while watching your favorite team's game, when you start to see tweets raving about a long touchdown pass by Eli Manning. Since he's on your fantasy team, you want to watch what happened: All you have to do is press a button or two to go from the tweet to the highlight, and throw that clip into the larger portion of the screen. Then you press another button to go back to your game.

"We've seen this over the last two or three years with ESPN on Xbox: People love short-form, personalized HD highlights on a TV screen," said Jurenka. "Those [videos] aren't easy to come by today. They're very easy on a tablet or a laptop or phone, but when we bring this here, we [...] allow people to have any of these experiences while they're watching on an Xbox One."

For the most part, Jurenka transitioned between screens quickly and with ease in a non-final version of the app; like most Xbox One offerings, the app supports voice navigation. According to Jurenka, the console taps into Xbox Live cloud technology, offloading processing to keep the NFL app moving quickly. It shows — during our demo, the app was much faster than any similar experience currently available on Xbox 360.

While the app's fantasy integration extends only to people who play fantasy football on the NFL website, it does allow users to manually input players of their choice to have the app track their performance. And with the Xbox One's Snap mode, you can be doing something like playing a game or watching a video in the main window while keeping tabs on your fantasy team in a sidebar.

"We're trying to take all of these things that you're doing today on your tablet or your phone, and make it a seamless, harmonizing experience on a single device," said Jurenka. 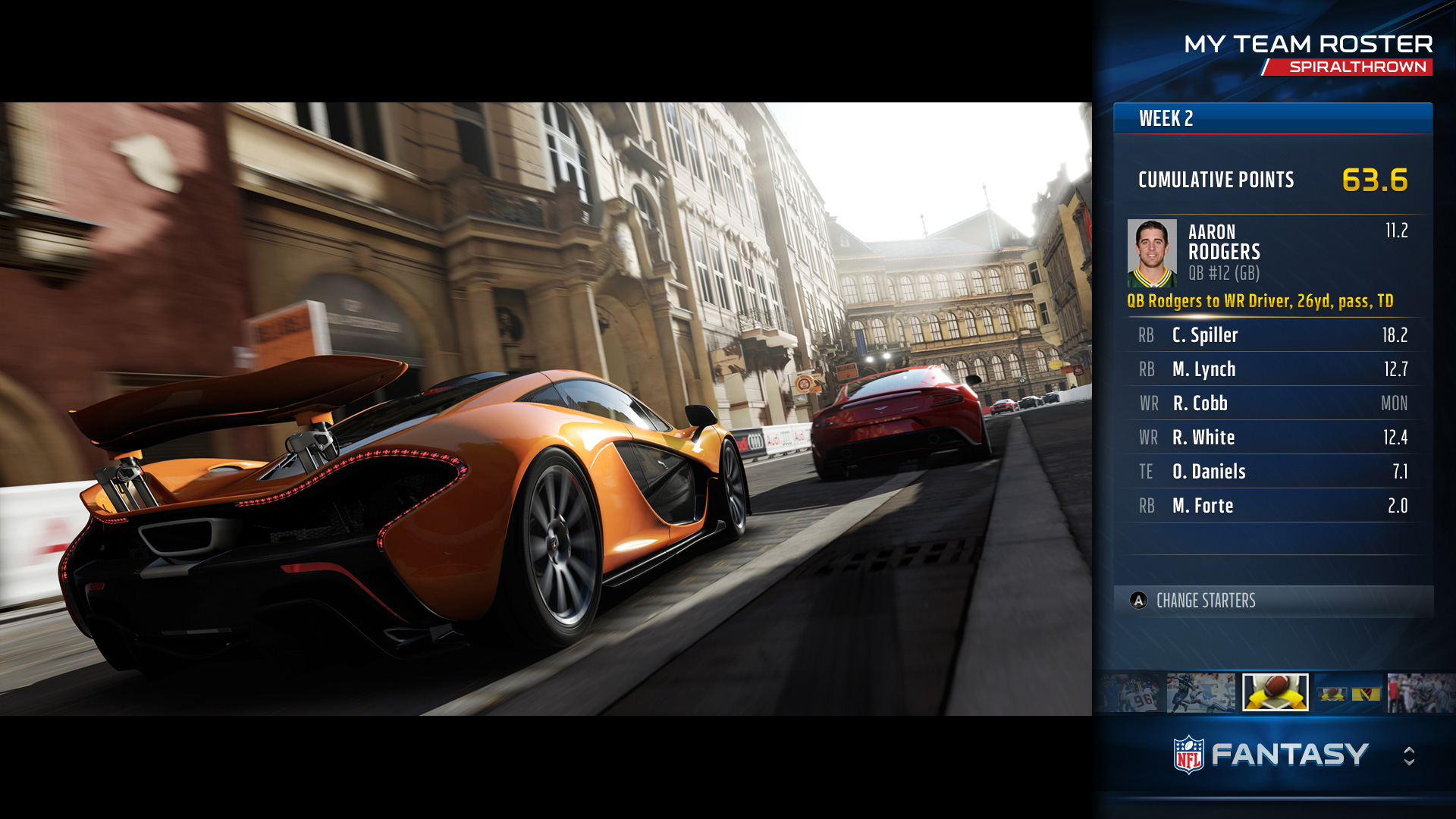 The ESPN app on Xbox One will be similar to the current Xbox 360 app, but it will feature the same interface as the NFL app. That choice allows for an evolution of Microsoft's design philosophy, a shift based on research derived from usage of the 360 app.

The current app lets users watch two pieces of content in a split-screen view, but that wasn't the most useful setup. "What we've found is that people are really watching one piece of video content, and they're snacking on different video content," Jurenka explained. So the Xbox One app lets users watch a sporting event or ESPN programming in the main window and keep something else in the sidebar's preview pane, and with the press of a button they can still switch back and forth between the two.

In addition, the Xbox One ESPN app will pull users' preferences from their ESPN web accounts. That way, the app can directly display content that's relevant to them and their favorite teams. Plus, those scores and statistics work in both normal and Snap modes.

According to Jurenka, the Xbox 360 ESPN app will not receive the aforementioned changes at this time. However, NFL.com Fantasy Football will be available today by itself as a free app on Xbox 360, Windows 8 and Windows Phone 8. The Xbox One apps for ESPN and the NFL will launch with the console this November.

Microsoft's partnership with the NFL also makes the Surface the official tablet of the league, and Microsoft hopes that teams will start to use the devices on the sidelines during games. We saw a brief demo of a Surface app called X2 that's designed to allow team staff to more easily track concussions.

X2 lets team trainers create a baseline health level and then see what changes with a potential head injury, all the way from the play during which the injury was suffered to the time when the athlete is declared fit to return. Doctors can assess symptoms and input them into the app right on the sideline with a Surface. We also saw screenshots of another app that serves as an electronic health record for players, allowing medical staff to see an athlete's current injuries and career health history.

These kinds of use cases represent a major shift for a league like the NFL, which can be reluctant to embrace technology. Use of the Surface tablets will begin this season with an eight-team pilot program. 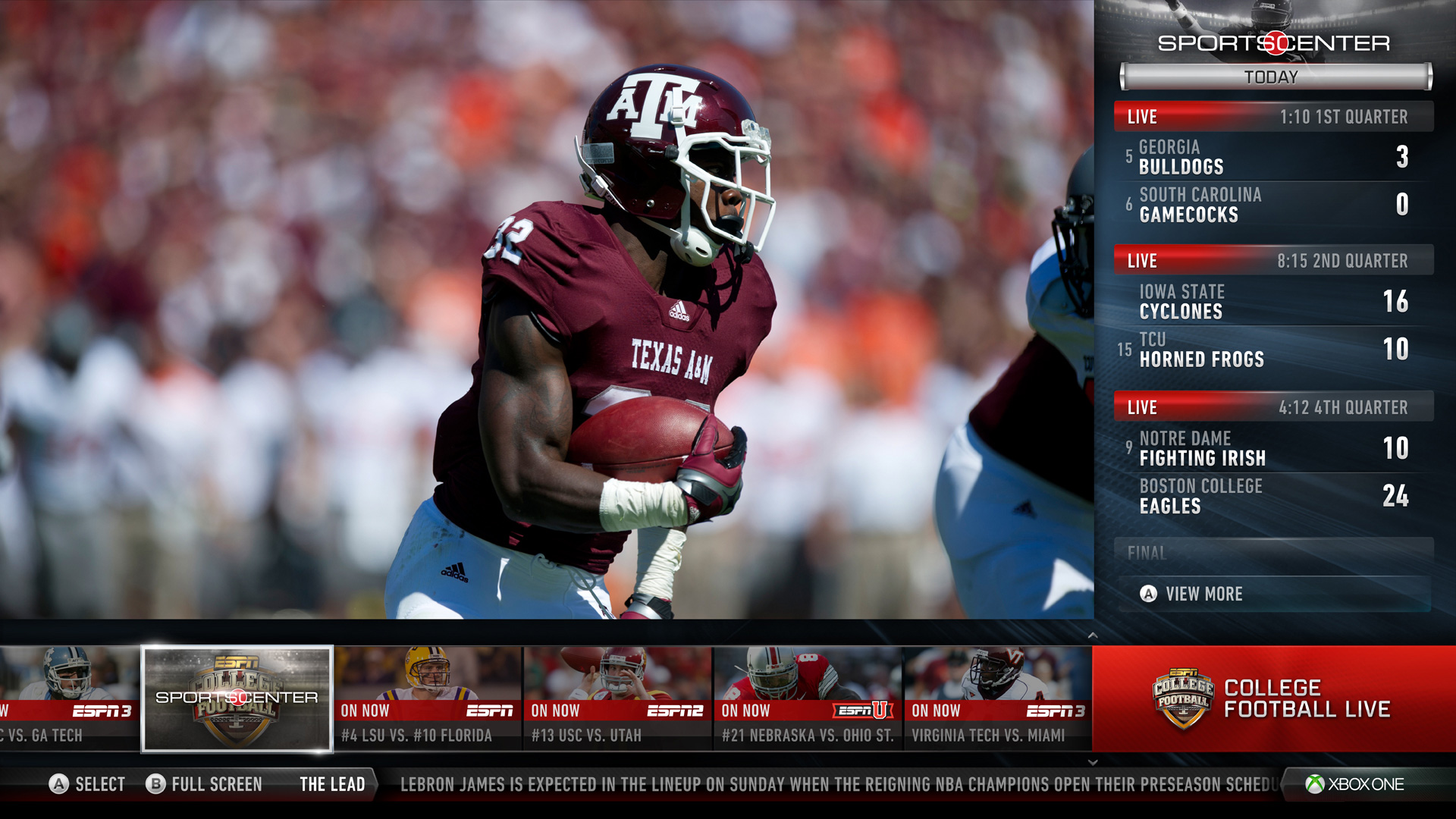 At heart, these apps are still modern experiences overlaid atop a legacy requirement: a cable subscription. But live sports is one of the main extant reasons for people to keep subscribing to cable, so the audience that Microsoft is going after with these apps is likely to be eager to check them out.

The Xbox One's Snap mode could be the key differentiating factor for these apps. On Xbox 360, content is siloed within apps, and you have to exit out to the Dashboard to do pretty much anything. The NFL and ESPN apps on Xbox One are built for multitasking, as is the console itself. Microsoft's sideline apps for Surface may end up changing the sport of football forever. And it's not just the content that's important; the way it's all connected together in these apps could make the Xbox One an important convergence device for sports fans and cable subscribers.