Share All sharing options for: Assassin's Creed 4: Black Flag and the terrible beauty of naval warfare

One spring day I stood on Portsmouth Dockyards in England, regarding HMS Victory with undisguised rapture.

That ship is one of the most beautiful objects ever crafted by mankind. Even leaving aside the romantic bias inherited by my Englishness, she is a thing of heart-stopping loveliness, just as much as, say, the Taj Mahal or a 1967 Chevrolet Corvette Coupe.

She is also a killing machine, designed explicitly to tear asunder other pretty frigates and ships-of-the-line. Her guns were capable of delivering unimaginable horror to the flesh of men and boys, a service rendered faithfully and efficiently to the Crown during the Battle of Trafalgar in 1805

Even so, if you had to choose, from all the weapons and military paraphernalia of the past few millennia — the prettiest gear, the most alluring stuff — surely you would be tempted by the magnificence of the great age of sail.

About 40 percent of the new game, set in the Caribbean during the time of rampant piracy, is set aboard ship, with the rest of the game taking the more familiar tack of landlubber activities like climbing houses, sneaking through shrubbery or assassinating dead-eyed officials in back alleys.

In the past, historic naval warfare has been limited in action games, partly because real battles were a slow business of tracking and disabling sailing ships, and partly because it is a difficult thing to recreate convincingly. The sea moves in a particular way, grips and slides ships with a motion and a weight that is much more difficult to reproduce than a Panzer IV grinding over dunes or a Mustang spinning in the air.

Optional and linear naval battles were featured in Assassin's Creed 3, and were well received. In Black Flag the combat systems, motion simulations, tactics and progression levels have been enhanced significantly, not to mention next-gentrified graphical and audio fidelity as well as the freedom of an open world.

I spent about seven hours playing a controlled demo, and was more happy, by far, when in control of the game's star ship, the Jackdaw, than when merely going through the familiar Assassin's Creed motions with her human captain Edward Kenway.

This is not to disparage the work that has been done by Ubisoft Montreal to iterate on man-based stealth and combat, merely to point out that the naval sections of the game feel fresh and new and that, on this evidence, they feel right.

"We worked a lot with the physics of the ship," said Ashraf Ismail in an interview with Polygon. "We want it to feel like this big heavy ship with a crew and weapons and the feeling of the waves hitting the ship."

Realism is not a word that the Ubisoft marketers are using for Black Flag. They prefer "credibility." In fact, it's a good choice.

A realistic sail-based naval warfare game might have a certain appeal, but as an action game, it would fail. And so the ships move much faster than they would in real life, as fast as a speedboat at top whack, although the feel of the ship rocking through the surf does not reveal this artifice to the player.

In naval combat, both real and pretend, the ability to turn quickly and to position the ship advantageously in order to deliver a broadside (cannons are on the sides of warships) is essential. Black Flag's turning arc is tighter than a real ship's would be, though not so much that the player feels like Lionel Messi twisting on his heels.

"We've found a really strong balance between the credibility of naval warfare and the fact that this is a video game," said Ismail. "It needs to be fun and it needs to have good pacing. We added elements to try to speed things up, but it feel like something I can believe in. It's not twitchy."

Another sign that the game's master is fun, rather than fact, is the placing of weapons on deck, where they would have unbalanced a real ship. In-game, this ensures the pleasure of seeing your gunners go about their work, and the satisfaction of enjoying extra weapons as Kenway progresses through the game, completing missions and adding to his store of toys. 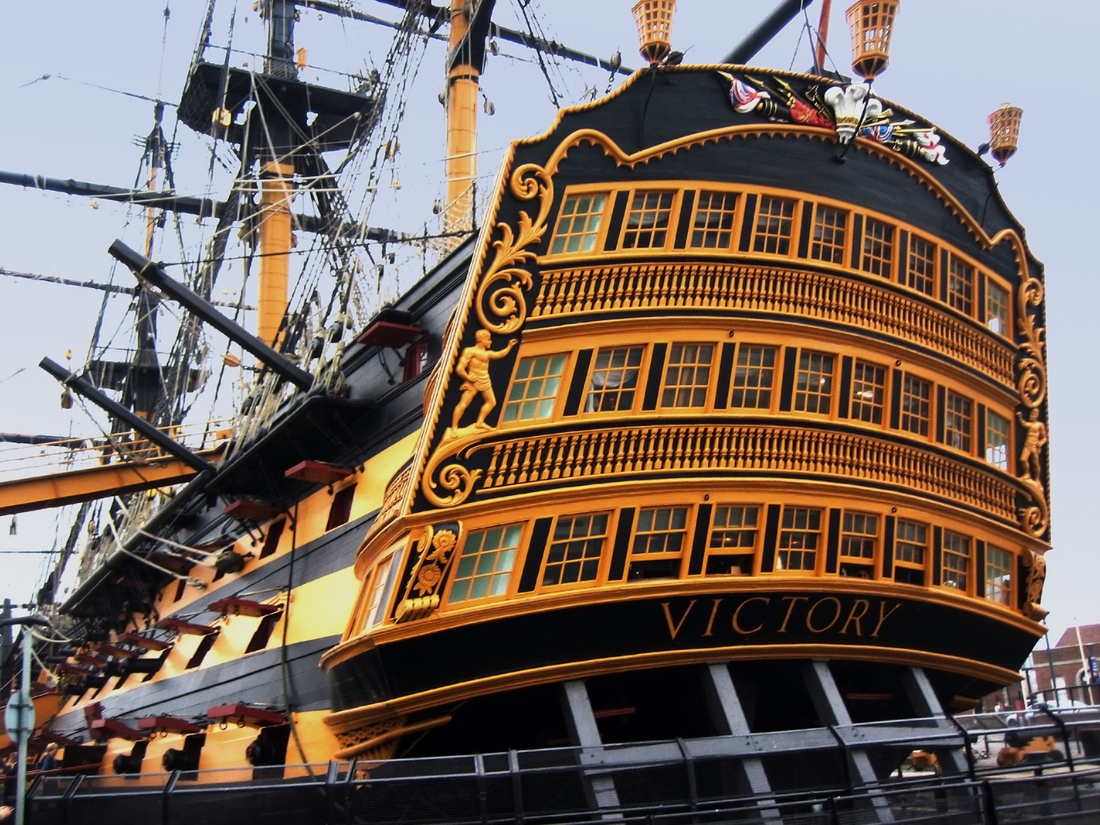 Tactically, naval warfare is about being in the right place at exactly the right time. A standard ploy is to take the enemy from behind, strafing sails and masts with some cheeky chain projectiles, before coming alongside the target and unleashing multiple cannonballs.

There follows a moment of turning for advantage during which you can make use of a curiously powerful swivel gun, before attempting another run.

Of course, the enemy is doing the same stuff to you. The trick is to see where you are going, where they are going, and where your weapons are pointed, all at the same time. It takes some doing.

As the game progresses, weapons and tactical options increase. The player unlocks a shotgun-like Heavy Shot as well as a powerful ram, for example.

The most significant departure from historical accuracy is the part played by wind and sail. In the game, the player has three speeds to choose from, indicated by the amount of canvas spread. But the wind is hardly a factor at all, offering a modest speed boost for ships running with the wind.

"Wind is not as strong as we initially thought about," says Ismail. "In earlier prototypes we had wind playing a big factor and players would be tacking into the wind but it was way too complicated to be thinking about that as well as shooting. It just wasn't fun."

Wind direction, strength and the corresponding use of sail, was the fundamental core of naval warfare in the 18th Century, but it was a finicky business. 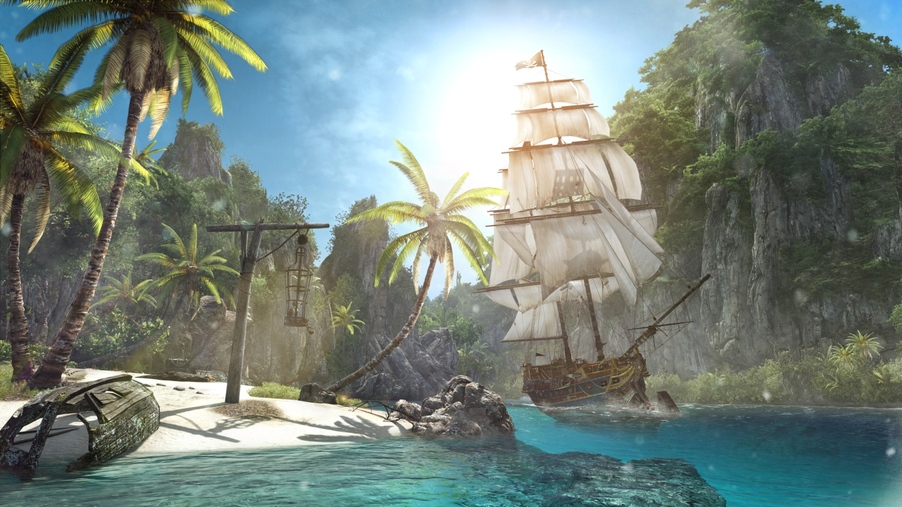 Sam Willis is a noted historian and author of a number of books on warfare in the age of sail including In the Hour of Victory. He told Polygon that a realistic simulation of ship-to-ship combat might be a frustrating experience for action gamers.

First of all there's the problem of meeting the enemy. In the 18th Century, as in Black Flag, it was suicidal to try to take on a larger ship, and so most battles were between a ship's captain who wanted to fight, and one who very much wanted to be somewhere else. Engagements would take some time to occur as the chase ensued.

"You're going to see each other probably at a distance of 20 miles," said Willis. "If one ship is sailing at four knots and another is sailing at three knots your difference is one mile an hour. Nothing is going to happen for a day or more. You're moving at walking pace."

Once battle commences in Black Flag, the windows to deal damage before maneuvering for a better position are tight. Taking full advantage of them can be difficult if, for example, another ship, an island, or a storm gets in the way.

In real life, these moments, when you got to fire, were even more precarious.

"Look down at your feet and imagine they are two ships facing one another," explained Willis . "That is optimal position for firing at one another. Unoptimal is with you standing with one foot ahead of the other, but in a sea battle the difference for that to happen is just a tiny breath of wind to catch one ship and move it forward. It's incredibly difficult to keep two ships moving next to each other."

Ubisoft's compromises with reality have delivered something that feels urgent and busy, without being an exercise in frustration or boredom.

Ismail has made use of the weather in a different way. Waves and swell can be used as cover against larger ships. The Jackdaw can shoot over waves, while enemy ships cannot. Effectively, this provides the tactical combat patterns that underpin most games, and allows for skill as well as the statistical advantages that come with upgrading the vessel.

Real battles in swells so heavy that they conceal a frigate at 100 yards would have been impossible. But weather patterns like fog and squalls offer escapes and advantages in the game that would have been familiar to Horatio Nelson himself. 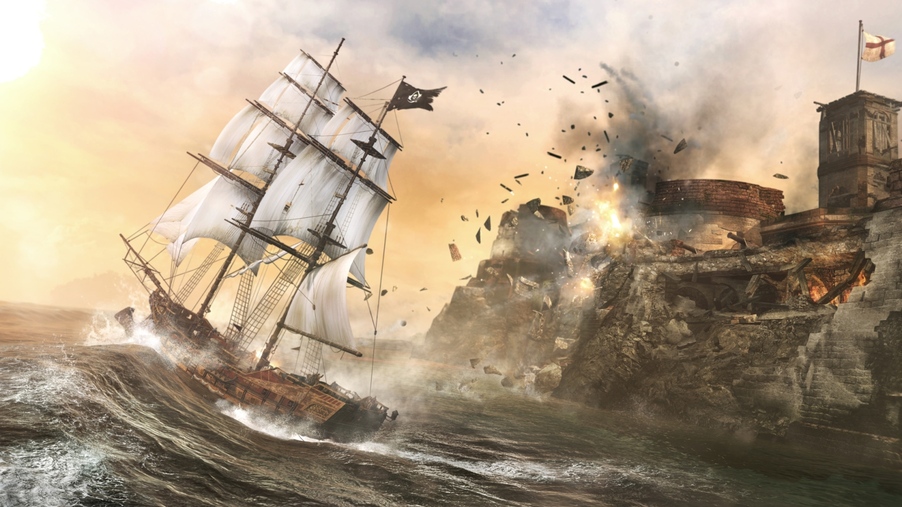 Black Flag has a land-based multiplayer mode, but nothing in which players can pit their ships against one another. Ubisoft played with the notion early in development, but couldn't get it to work.

"Balancing and latency were problems," said Ismail. "We couldn't justifiably say that we could do a really good, polished version without negatively impacting the rest of the game."

But if the sea battles are a hit with Assassin's Creed fans, there'll almost certainly be more in the coming years. "I sincerely hope people love the naval battles and they love Black Flag," said Ismail. "Multiplayer naval warfare is something we can look to in the future."