Despite a lack of much life-or-death peril, Outlast still delivers some genuine scares

Outlast manages to squeeze new kinds of scares out of the very basic, very primal human fear of being chased.

It taps into other sources of terror well trod by its survival horror predecessors — with varying degrees of success — but everything you need to know about Outlast's modus operandi is found in a single, completely impractical ability: While running away from a pursuer, you can look over your shoulder to catch a glimpse of the monster that wants to tear you apart.

Outlast weaves together a web of jump scares and scripted eviscerations, which, while fairly well-paced, don't always hit the mark. Where Outlast shines is in its moments of emergent horror; the fully optional moments that occur entirely at the will of the player. Unlike a lot of survival horror games, Outlast will only scare the bejeezus out of you if you really want it to.

Outlast casts you in the shoes of reporter Miles Upshur, a tenacious investigator with very few self-preservation instincts. Following a lead, he enters the dilapidated Mount Massive Asylum armed only with a notebook and night vision-equipped video camera. The former provides all of Upshur's colorful internal monologue, as his mental state steadily deteriorates as he witnesses the facility's horrors. The latter lets him see in Mount Massive's pervasive darkness, though it chews through batteries faster than an overclocked Game Gear.

Upshur's camera is more than just a glorified flashlight. The night vision effect is one of the scariest things Outlast has going for it, as it cuts the player's depth of view to just a few feet in front of them. Using the camera's zoom function is the only way to shed light on distant objects, and every time those objects include reflections from the eyes of a murderer, it's a guaranteed scare.

The camera also serves as a documentation tool, expanding Upshur's insight into Mount Massive's operation when he captures footage of certain, especially horrifying set pieces. I say "especially," because pretty much every wall of the asylum is caked in gore; the setting actually kind of undercuts itself with the almost comical amount of viscera strewn across the grounds. To wit: Maybe one out of every five toilets is inexplicably plugged up with severed appendages.

You never wield a weapon throughout the course of Outlast's campaign; the only real power you're afforded is the ability to see in the dark, provided you've found enough batteries in the environment to keep your camera powered. The game won't hesitate to even take that meager advantage away from you, whether it's due to Upshur's clumsiness or the seconds-long battery reloading animation, which frequently leaves you stranded in the dark and completely vulnerable. 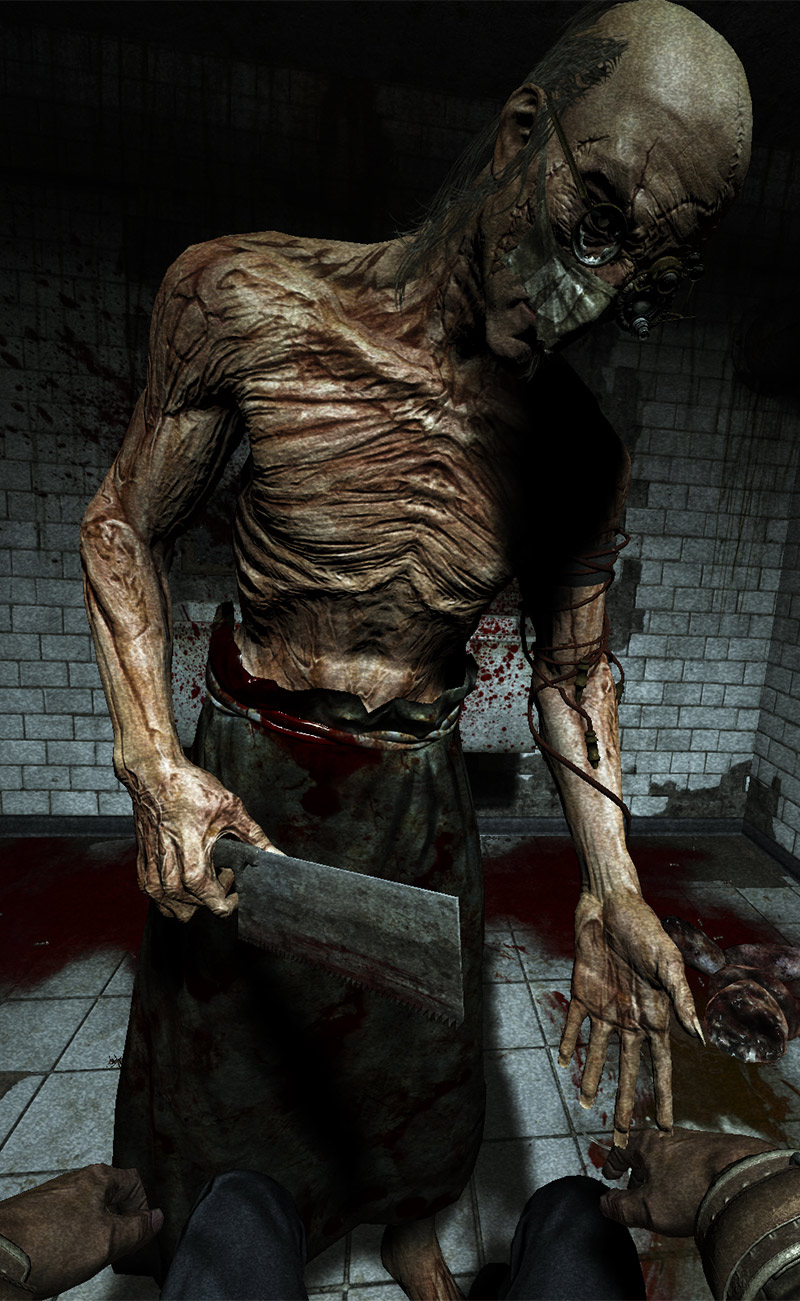 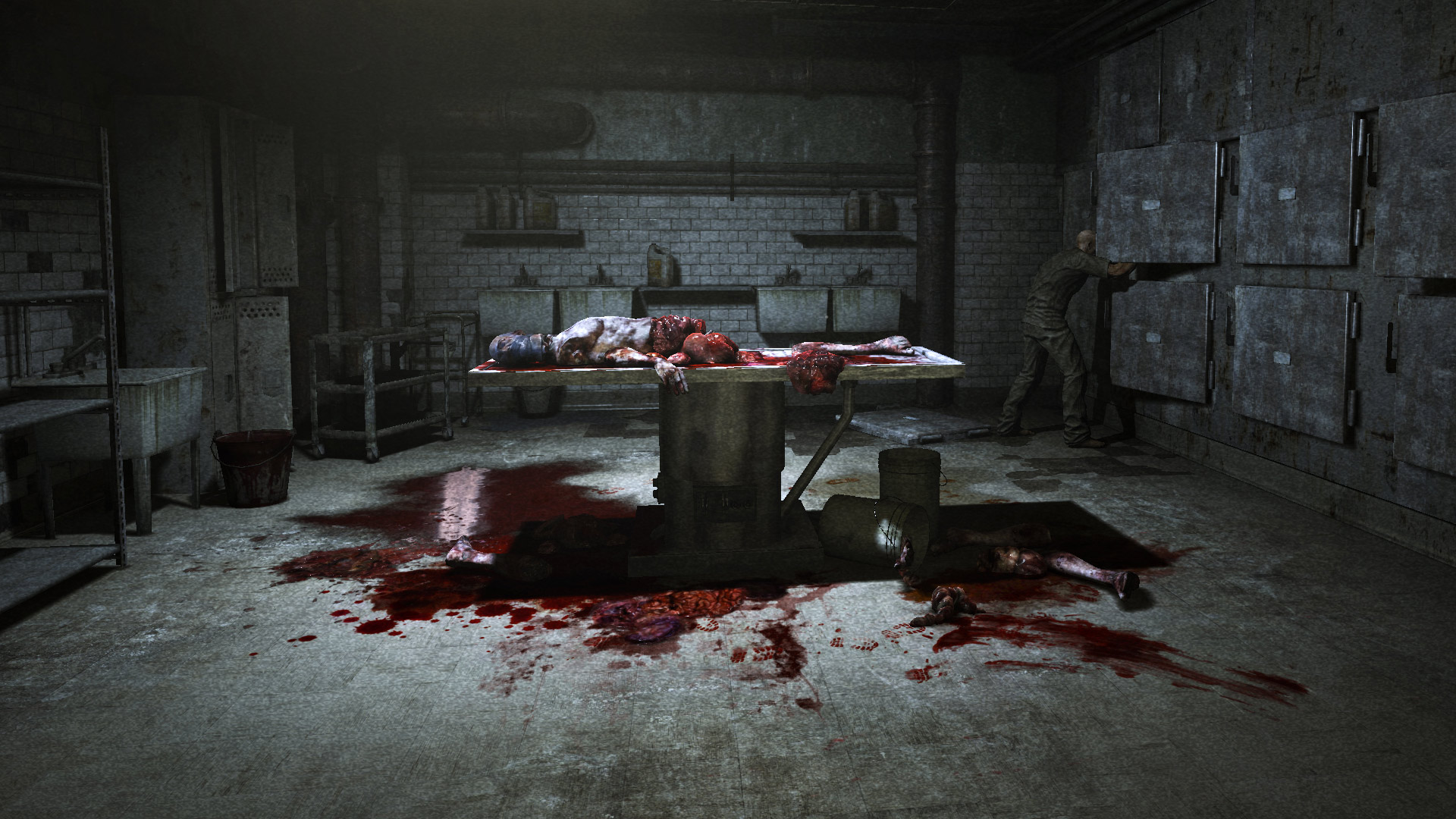 However, many of the asylum's inhabitants aren't actually violent, a fact belied by their near-universal grotesqueness. Just about every patient is self-mutilated, gaunt and partially nude, either locked in a catatonic state or screaming obscenities while grabbing at the player through the bars in their cells. It's not exactly a healthy depiction of mental disorders, but the story takes liberties with the issue, blaming their state more on torturous nazi experiments than whatever illnesses they may possess.

When you do encounter a violent patient, your only option is to flee until you can break line-of-sight — an enterprise aided by closing doors in your wake or vaulting over obstacles — and find an adequate hiding spot. The latter strategy is far from foolproof, as your pursuer will spend some time turning over the room he last saw you in. All you can do is watch, wait and hope for the best.

Even if you manage to die, Outlast is liberal with its checkpoints

Even when you’re discovered, cornered and overrun, you’ll likely survive the encounter, as Outlast’s enemies possess a startling lack of lethality. Just a handful of endgame enemies are capable of killing you in a single hit — everyone else has to whale on you a few times before you go down, which should never really happen, because it's not that hard to run away from your assailant. Even if you manage to die, Outlast is liberal with its checkpoints.

Outlast’s general lack of difficulty sounds damning, but it’s actually a double-edged sword. All survival horror games struggle with the mechanics of simulating danger with virtual death without being annoying about it. Outlast leans heavily on the latter — it doesn't establish a fear of failure, which kind of neglects one of the biggest strengths that interactive horror has going for it, but it's never frustrating; a boon few other horror games can claim.

Despite a lack of much life-or-death peril, Outlast still delivers some genuine scares

It speaks to Outlastâs ingenuity that even absent that crucial source of terror, it still managed to wring a few dozen startled yelps out of me by the time it reached its conclusion. Yes, Outlastâs blind corners and pitch black sewers possess an illusion of danger greater than the actual threat posed by the monsters they hide. But really, illusions of danger are all games are capable of conjuring â and Outlast conjures them up relentlessly.