Out of the Shadows is a barely playable letdown.

The turtles deserve better than Teenage Mutant Ninja Turtles: Out of the Shadows.

The cartoon/action figure/video game property from the '80s was staged for a console comeback in Out of the Shadows. It's a third-person brawler with an RPG-lite leveling system and plenty of Ninja Turtle nostalgia, and developer Red Fly Studio laid the blueprints for a competent action game. Instead, it has found a faceplant, and Out of the Shadows is rendered a nearly unplayable mess by myriad bugs and other technical issues.

You take on the role of Donatello, Michelangelo, Raphael and Leonardo — the eponymous Ninjas — as they serve up justice to evildoers and their armies of minions. The plot is pure fan service as all sorts of TMNT favorites show up — nerdy, evil Baxter, Shredder himself, intrepid reporter April O'Neil, etc. — which made this former 8-year-old TMNT fangirl smile. The story missions serve up a mix of third-person brawling with light stealth, platforming and even a hacking minigame thrown in.

When it works, Out of the Shadows is smooth enough. Enemies will swarm you, requiring you to use counters and whammy the attack button to build combos. Successful combos earn you the ability to do special moves, and bad guys will often telegraph their own attacks, allowing you to counter or dodge. It's a simple, well-worn mix that works well when the controls are responsive (and the camera is cooperating). 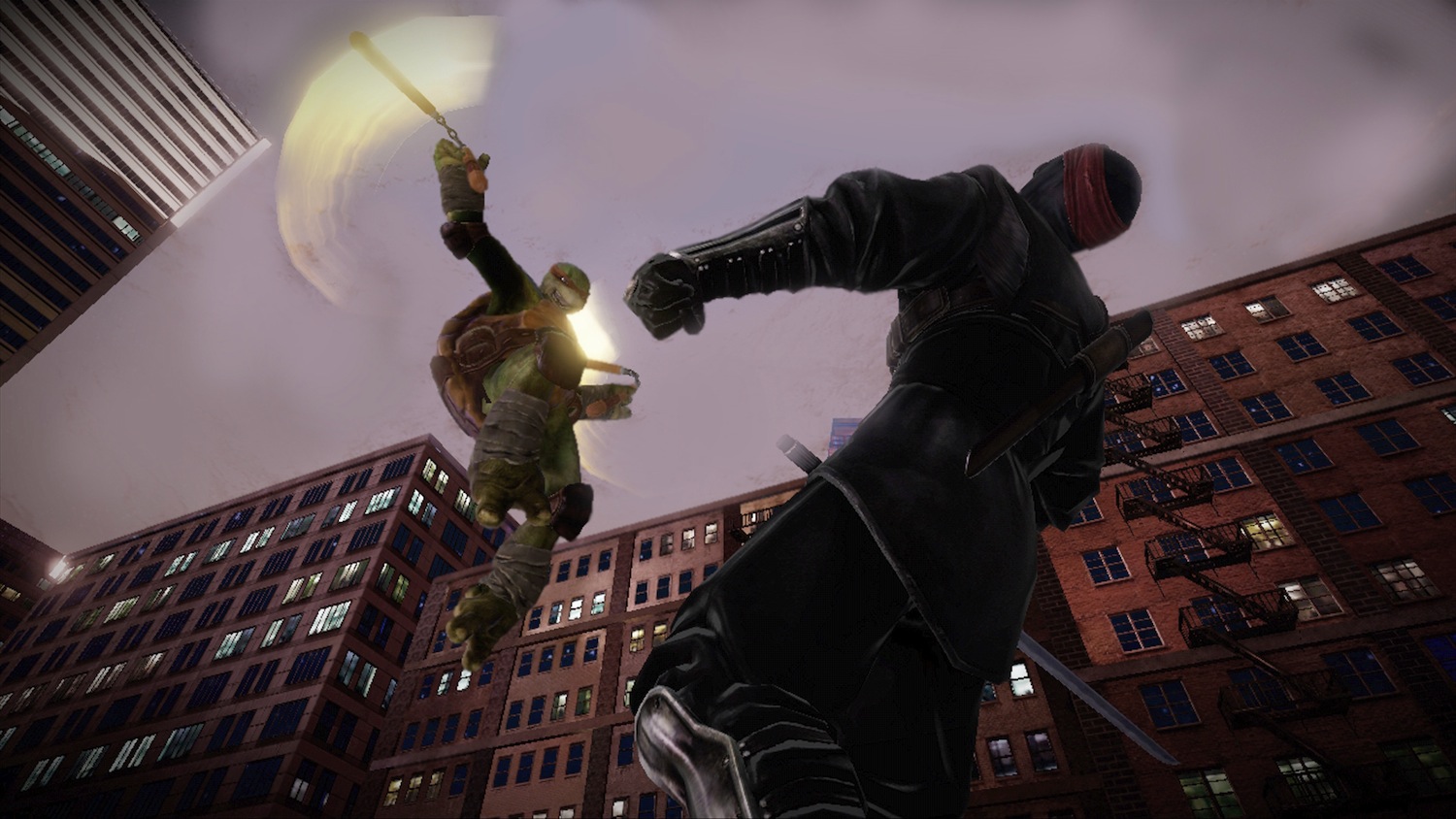 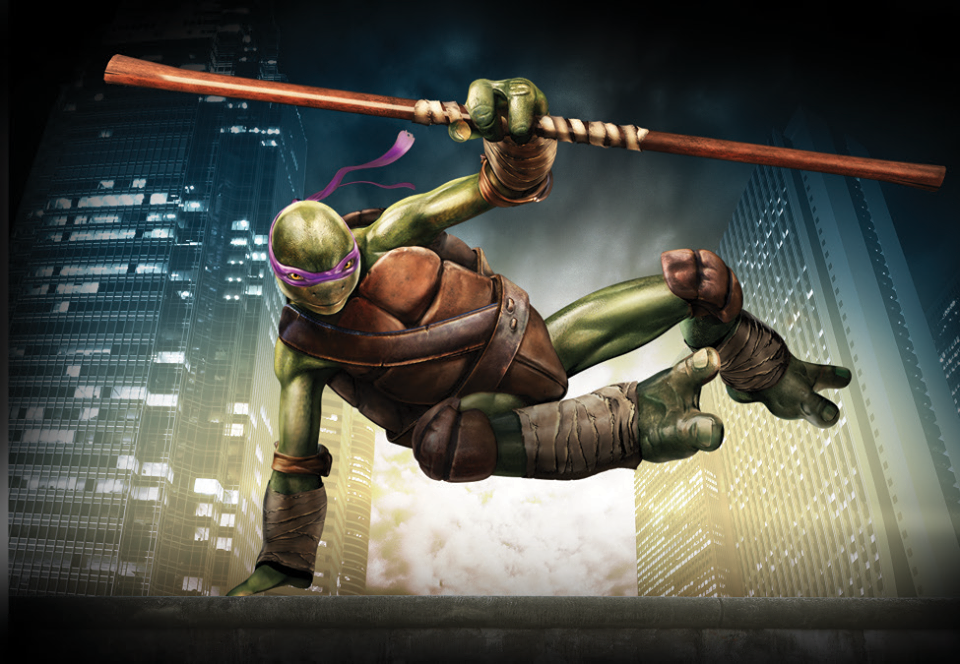 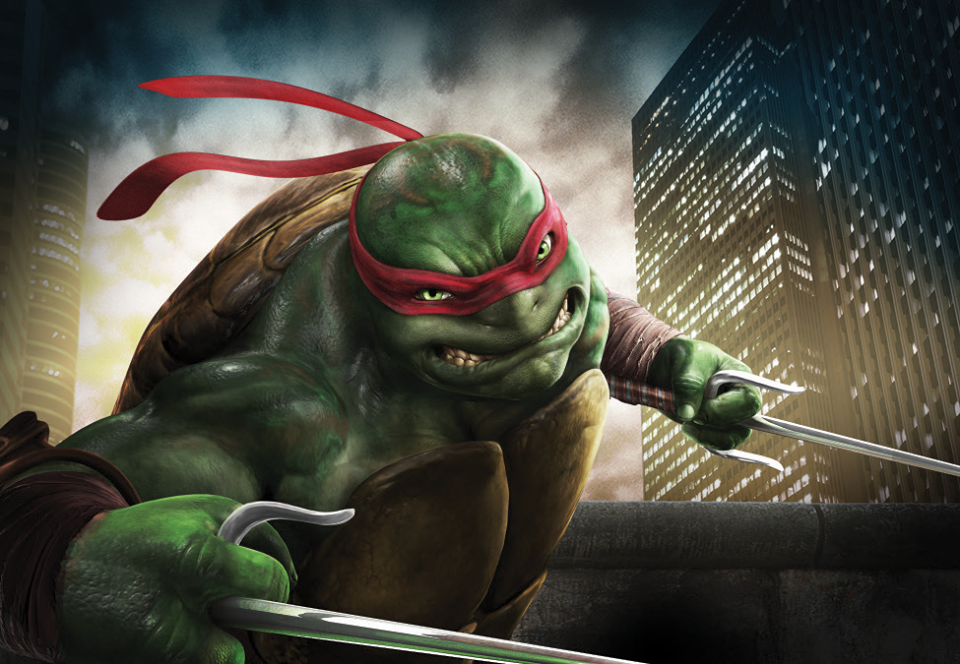 Each brother has his own signature weapon, lending some variety to the combat. Leonardo has his dual katanas and Donatello his signature bo staff, giving each of them longer reach. Raphael is an up-close brawler with his sai, as is Michelangelo with his nunchuks, though Mikey has more speed and a twitchier counter. I enjoyed switching among turtles on the fly, and experimenting with each in different enemy encounters.

Each turtle lends variety to the combat

Bolstering Out of the Shadows' combat is a simplified RPG-esque upgrade system, where you level up your turtles using ability points. This adds a thin (but welcome) layer of strategy to the otherwise mash-y gameplay, allowing you to choose upgraded moves from a simple skill tree.

Red Fly has designed a brawler with an appealing feature set — but Out of the Shadows is so bogged down with technical issues that I could not finish it. Multiple times, a cutscene failed to trigger (usually because an enemy was either stuck inside geometry or somewhere in the sky), requiring a restart. Just as often, I would spawn somewhere either inside of level geometry or in an empty, inaccessible room, or my turtle brothers would end up stuck elsewhere, leaving me on my own.

Adding to the pain, the camera is also a complete mess. Often, I had a great view of the walls or the sky, but no idea what my player character was doing. The controls are similarly sluggish — I often felt as if my chosen turtle was trudging underwater.

The worst offender is a boss character that nearly ended my playthrough a few hours into the game. Its character model clipped into "solid" parts of scenery, rendering its weak spots invulnerable to my frenzied chops. Or the weak spots simply failed to register, no matter how obviously I was laying into them.

Bugs like this render the game almost unplayable. With patience and no small amount of luck, it is possible to progress in the game, but it's simply not worth it.

Out of the Shadows is a barely playable letdown

Red Fly Studio laid the groundwork for a decent third-person action game, dripping with TMNT nostalgia. I was looking forward to spending time with my favorite mutants again after all these years, but Out of the Shadows made me wish they'd stayed tucked away in my memory.

Teenage Mutant Ninja Turtles: Out of the Shadows was reviewed using code provided by the publisher. You can read more about Polygon's ethics policy here.