While Hepler described Ambrov X as her new project, according to the Kickstarter page Hepler's involvement won't be guaranteed until funding hits $750,000. The project's initial goal is $500,000.

Ambrov X is an episodic role-playing game set in the Sime~Gen universe created by Jacqueline Lichtenberg and Jean Lorrah in the 60s. There are more than a dozen books in the series, the latest of which was published in 2011. In the fiction of the universe, humanity is divided into two subspecies that must rely on one another to survive.

Ambrov X will be a role-playing game that requires players to "enter a tight, emotional, both predatory and romantic relationship with a single bonded companion character."

Hepler wrote on the official Kickstarter page for the project that she decided to potentially join the project, which she says looked like a "complete Mass Effect rip-off," because of the potential the fiction creates for a relationship-driven narrative.

"... I read the source material, and I started thinking… What if when Ash/Kaidan turn against Shepard in the Citadel coup, Shepard’s own life literally depended on convincing them back to his side?," she wrote. "What if Hawke could have used Anders’s addiction to her life-force to keep him from turning fully Vengeance? How much more intense could your relationship be with your followers if they were more than friends, more than romances – if they were both a part of your soul and the greatest threat to it?

"Over and over again, the majority of Bioware fans tell us that a large part of what draws them to a character is their involvement in the main plot of the game. Fans like to have the chance to put their lover/best buddy Alistair on the throne, or have Morrigan end the Blight by carrying their baby. In the writers’ rooms, we spent long hours trying to respond to this by giving every follower a shining moment in the plot, but it’s hard for a single story to support 8 or 9 equally important co-starring roles. And the reality is that on a large game, things change – followers get cut, or downgraded to non-romanceable, or gender-swapped. And in a party-based RPG, it has to be gameplay that guides such decisions – whether a follower is the much-needed mage or rogue is often more important than how well-written they are, or how much their personal arc might get under your skin." 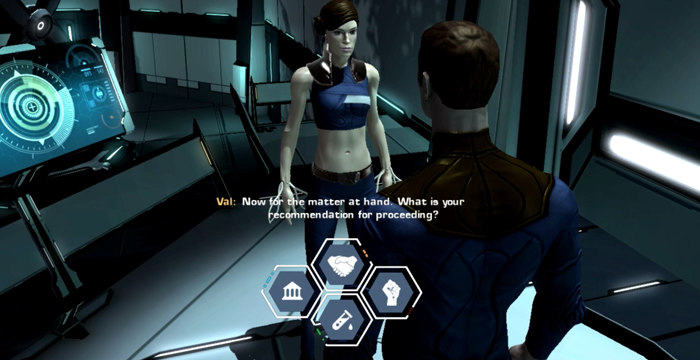 In Ambrox X, Hepler wrote, she saw the potential to help create a focused narrative based on a single relationship.

"While there is also a sprawling space opera plot that players will navigate and world-affecting decisions to be made, the key moments hinge on the tumultuous relationship between the two main characters. Though they may fight, make up, take opposite sides and love and hate each other in equal measure, they cannot survive without each other… and humanity cannot survive without their alliance. But this doesn’t mean the story is limited to a single playthrough with a single paired character. Our intent is to have a distinct paired character for each race/gender combination the player can choose. When combined with the choices the player makes in the plots, Ambrov X will be a deep story with extensive replayability. By producing the game episodically, we get the opportunity to develop these all-important characters in conjuction with the fans. By hearing fan feedback early and often, we can tailor the characters to players’ interests, so that by the final installment, any surprises in the ending should be the kind that make you gasp… not groan."

According to the Kickstarter page, the title will be a 3D, single-player action role-playing game with players creating a character that is one of the universe's two species &mdash; Sime or Gen &mdash; and one of four classes. Player characters will be joined by a single companion of the opposite species, but either gender. The fully-voiced game will include cinematic cut-scenes in six languages and will be distributed DRM-free for Windows, OS X and Linux in five, three to five hour episodes.

The game promises to deliver a character-driven story powered by player choice, according to the Kickstarter.

"Through the Paradigm System, your choices will lead you in directions that are unique to you and your character," according to the Kickstarter. "It's not a moral system based on Good, Neutral or Evil, but a system that reflects the complexity of choices we face in real life. Our emphasis on Choice also offers unparalleled replayability."

You can read more about the game's conversation and combat systems over on the Kickstarter page. The game is in development by Loreful and headed up by Ben Steel, who was an event designer on Guild Wars 2.

Hepler's involvement in the project is sure to rekindle some of the heat the writer received over her comments about making games more approachable. But that hasn't changed her stance, she writes.

"... I continue to firmly believe that we have not come of age as an industry or a hobby, until you no longer have to ask someone 'Are you a gamer?' because everyone plays games, and you only need to ask 'What kinds of games do you play?'," she wrote. "With Ambrov X, as with Dragon Age and SWTOR, we are reaching out past the 'straight white male' demographic and trying to create a game for anyone who loves a good sci-fi story. Players can play any gender and romance any gender they want. Because who am I to come into your living room and tell you how to play?"