During a visit to Kojima Productions' new Los Angeles-based studio, Kojima Productions West Coast, we got a peek at a new gameplay demonstration of Metal Gear Solid 5: Ground Zeroes, the so-called prologue to The Phantom Pain. Fortunately for us, that gameplay demo didn't quite go as planned and the results, as they relate to how the Metal Gear franchise might be evolving, are certainly interesting.

Based on what we saw of Metal Gear Solid 5 today, there's a renewed emphasis on updating Metal Gear's gameplay mechanics — with slowed-down executions, interrogation techniques, speedier traversal — and a leaner story told through fewer cutscenes.

The slice of Ground Zeroes we saw was the same section Kojima Productions showed for the first time last year at PAX Prime — only this time, the game's spoken dialogue was in English. That meant we got to hear the new voice of Snake/Big Boss, Keifer Sutherland, delivering signature lines like "Kept you waiting, huh?" (It was weird.)

The demo began with the camera following the character Skull Face into a military prison compound during a moonlit, rainy night. After some story set up that offers more questions than answers, the player is given control of Big Boss, who's tasked with infiltrating the compound in search of a piece of intelligence.

Metal Gear creator Hideo Kojima explained that Ground Zeroes is not quite an open world. Since Ground Zeroes is a prologue to the larger game, The Phantom Pain, Kojima said Snake will play in a more limited space.

Snake's gear consisted of a few items, including a pair of binoculars and a holographic tablet dubbed the iDroid. Using the binoculars, Snake could scope out the compound to survey how heavily guarded it was. He could also mark the location of enemy soldiers, which pops a little triangle icon over their heads. Snake can track marked soldiers and, in some cases, see them through walls, tarps and whatever else might obscure his view. And when looking at an item of interest through the binoculars, he'll receive helpful intel from headquarters. 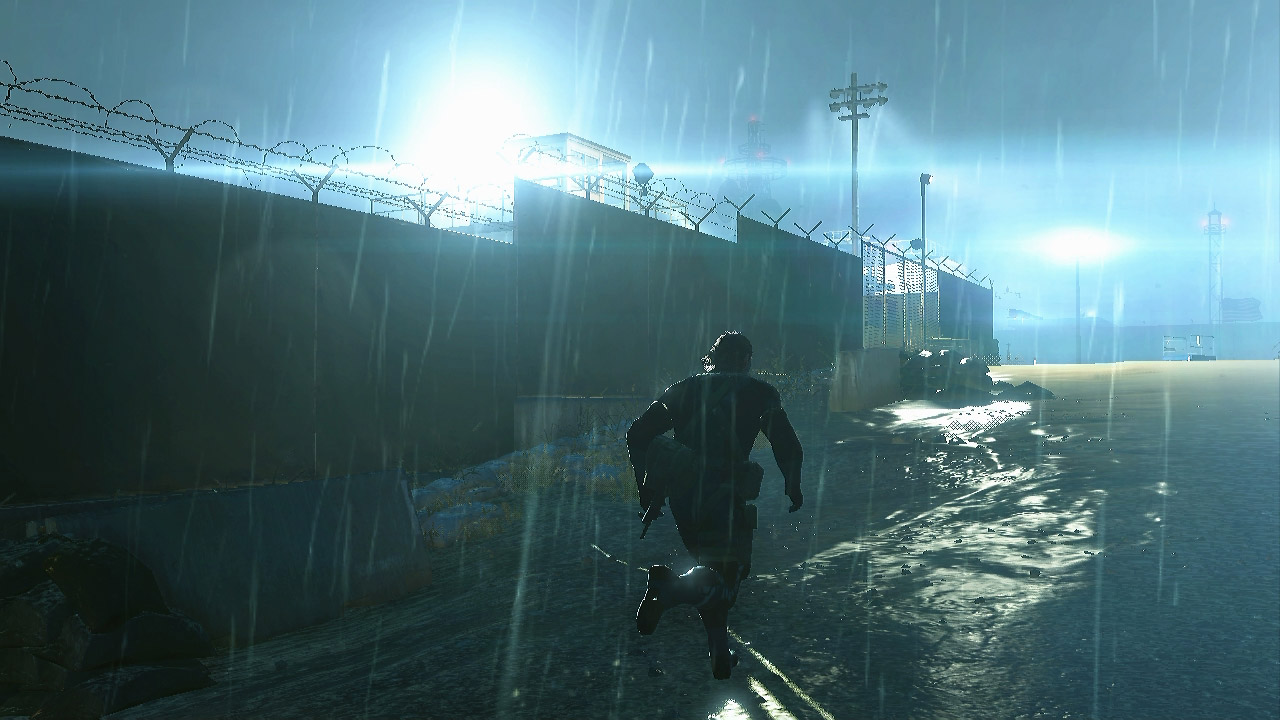 In the demo, which was being played on a laptop computer by Metal Gear Solid 5 creative producer Yuji Korekado, there was little in the way of visible HUD or interface. There are contextual button prompts when Snake approaches ladders and locked doors, but little else to clutter the screen during gameplay.

Apparently, Kojima Productions will communicate some HUD information through the environment to help Snake stay stealthy. For example, while the pathway of searchlights that can expose Snake's position can be seen pretty clearly, when lens flares from those lights slash across the screen, it's an indicator that Snake's in danger.

Snake can turn those bright lights on enemies to his advantage. If he takes control of a searchlight, he can shine the beam on enemy soldiers, distracting them. When engaged in combat, he can flick on a flashlight attached to a gun to momentarily blind his target.

As Snake worked his way into the compound, Korekado had him stealthily take down a few soldiers. He performed a silent CQC takedown and was then given the option to knock out, kill or interrogate his prey. Korekado chose to interrogate, revealing the location of the item Snake was looking for — which, by the way, turned out to be a red-colored "XOF" patch dropped by Skull Face during the opening cutscene. Snake pulled out his iDroid device and marked the location, a transport truck, on a holographically projected map. 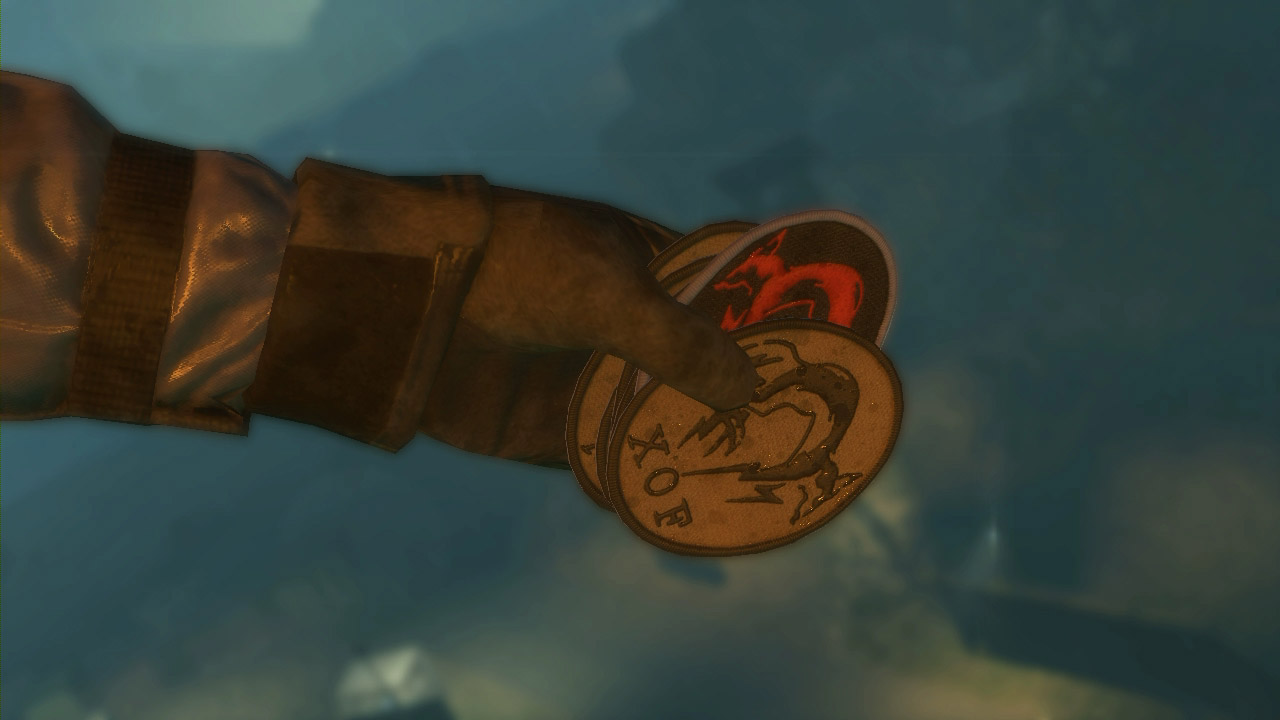 In his next enemy encounter, Snake performed a CQC against an armed guard, snatching away his target's rifle then knocking him out. Shortly after, he encountered a group of soldiers that made his current path to the truck impossible. Korekado chose another route, the roof of a small nearby building.

Here's where things get more interesting: Snake attempted to distract a patrolmen by tossing an empty gun magazine close to his position, then leaped down from the roof. To his surprise, another soldier previously out of sight was waiting for him. When Snake was spotted, the "!" alert alarm sounded and Ground Zeroes kicked into slow motion, giving Korekado an extra second or two to line up a shot and fire a silenced round into the head of the man who spotted him. Despite being spotted, Korekado was able to diffuse the situation before the alert spread.

Korekado wasn't so lucky just moments later, when Snake was spotted by another pair of guards. At this point, Ground Zeroes turned into an all-out firefight, looking more like a third-person shooter than your typical Metal Gear sneak-fest.

Snake was under heavy fire and taking life-threatening damage, which Ground Zeroes visualized with blood spatters hitting the camera lens. Snake managed to make it to cover, where he restored himself to full health. Not through the consumption of rations, mind you. Snake's health appeared to regenerate automatically. Whether that signals the use of regenerating health in a core Metal Gear Solid game, we don't yet know. But it sure looks that way.

That run-and-gun escape wasn't the original plan, according to Hideo Kojima. He explained that Snake was supposed to sneak out of the base using a jeep and call for an extraction by helicopter. Korekado did manage to make it out alive, though Kojima gave him a ribbing for his performance.

Kojima Productions didn't elaborate on some of the gameplay elements that may be working their way into Metal Gear Solid 5, like "bullet time" style mechanics and regenerating health. It does appear that the developer is continuing to expand the tactical espionage tools that players have at their disposal, some of which may drastically change the way Metal Gear Solid plays.

The developer is also changing how we're served MGS 5's story. Kojima said his next game will have fewer cutscenes, and smoother transitions between gameplay and cinematics. The game's open-world nature, he said, would make those traditional cutscenes "kind of a distraction."

Gameplay changes aside, Metal Gear Solid 5: Ground Zeroes is a gorgeous game. Kojima Productions said the version on display was of "current generation equivalent quality" and ran at 30 frames per second. The next-gen version, Kojima said, will run at 60 frames per second, and with greater visual detail.

Kojima said they'll show that version at Tokyo Game Show later this month, where we may see what other changes are in store for Snake.