Share All sharing options for: Lords of the Fallen offers a less punishing form of demon slaying

The tactical melee combat of Lords of the Fallen, CI Games and Deck13 Interactive's medieval fantasy action role-playing game, may draw some justifiable comparisons to From Software's Souls series for its weighty, deliberate combat encounters. Players must take care in both offense and defense when striking down demons, called Rhogar in Lords of the Fallen, and choose their moves wisely, or suffer the consequences.

But Lords of the Fallen is not as punishing of a game as Demon's Souls or Dark Souls. It does promote using both weapon-based attacks and magic strategically, but these are two different games with very different play styles, based on a recent hands-off demo of the game.

Lords of the Fallen is set some 8,000 years after human beings fought and defeated a god and his army. As the hulking hero Harkin, players battle the Lords and Generals of a demonic army of varying shapes and sizes — though virtually every Rhogar we saw was some variation on a hulking, muscular mountain of a foe. Almost every character looks like he stepped out of Warhammer or Darksiders, wearing broad-shouldered armor and carrying huge, heavy swords and hammers. 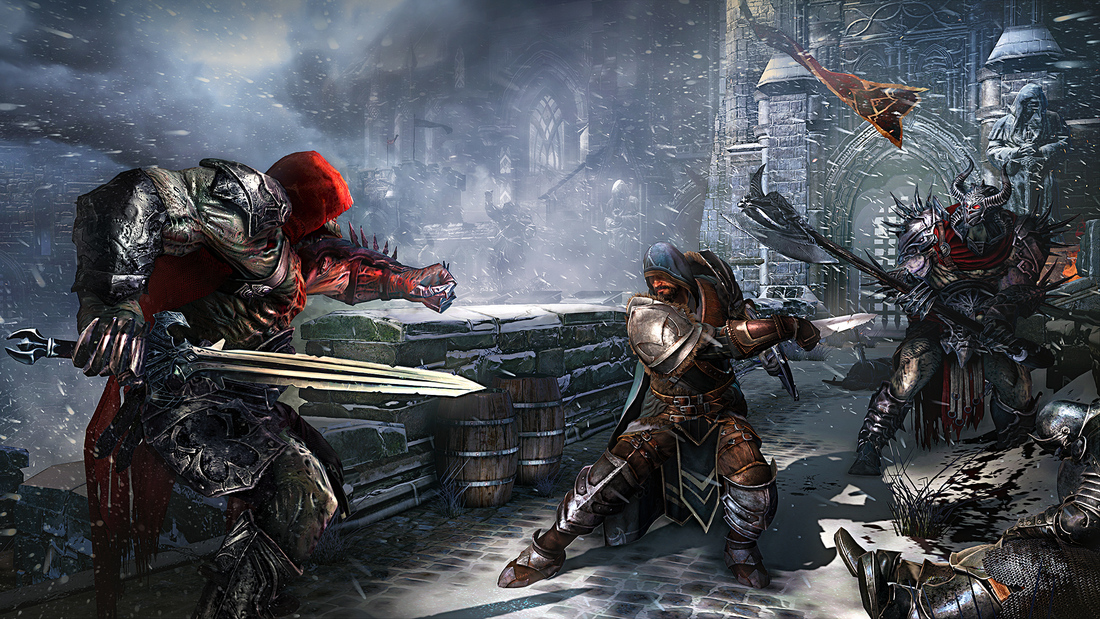 The main character can be played as one of three classes: cleric, warrior or rogue. Each has their own skill tree, giving the player the option to play with ranged spell attacks, heavier damage or stealth-based powers. In the version we saw, Harkin used a few of the rogue class' spells that focus on spawning clones. He can project ghostly versions of himself to either distract his foes or use them as deadly projectiles that sprint toward them to inflict damage.

Lords of the Fallen is not a hack-and-slash action-RPG, according to executive producer Tomasz Gop, and attempts to button-mash your way through a fight will most likely meet with failure. Combat appears to be a methodical give and take of blows, blocks and dodges. In one boss fight we watched, Gop was cautious with his attacks, waiting for a Rhogar called the First Warden to strike with his curved greatsword, then attacking quickly while his foe was locked into his swing animation. Gop played defensively throughout, strategically keeping his distance from the First Warden and dodge-rolling out of harm's way when the demon attacked.

It appears players will need to be mindful of their stamina levels and the weight of their equipment. Attack wildly, and you'll wear out your warrior. Weigh yourself down with bulky armor, and you'll move more slowly. It's pretty standard, but serviceable looking stuff.

Outside of combat, Lords of the Fallen will feature a strong emphasis on exploration, Gop said. Players will skulk through the halls and tunnels of castles and monasteries in search of new weapons, armor and craftable items, searching out shortcuts to their destination and alternative pathways to sneak up on foes.

Lords of the Fallen has been in development at Deck13 for about two years, Gop said, and is nearing its alpha state. He expects the game to come to Windows PC, Xbox One and PlayStation in fall 2014.