The developer of Super TIME Force and Superbrothers Sword & Sworcery, Toronto-based indie Capy Games, brought another of its games to Seattle, Wash. last week, giving the public its first hands-on with an experimental title called Synchroma.

Inspired in part by Ninja Theory's DmC and the sadistic desire to give players "a really hard time all the time," the game is a challenging platformer with a clever, but cruel twist.

The premise is simple: You control a glitchy black cube as it moves along a track. Obstacles, like whirling red spikes and gaps in the track stand between you and the finish line. You simply need to jump, duck and "synch" parts of the track — bringing together broken pieces to fill in gaps — and not die.

The catch? Synchroma doesn't tell you how to control that cube. The player has to figure it out.

The controls are not simple; they require three simultaneous inputs to perform. Each game you play, those inputs are randomized. To jump, for example, you may need to press up on the d-pad, A and X on an Xbox 360 controller at the same time. To duck, you may need to press down, right bumper and Y. Next game, they'll be entirely different.

That's easy enough when tracks only ask the player to jump over things. But when jumps are followed by a gap in the track, then something you have to jump over, duck under, jump over, things get hairy. It's challenging, but incredibly addictive.

Synchroma was born at a Capy game jam, a five day-long event during which one programmer and one artist are randomly paired up to quickly design and develop a game. In this case, that two-man team was programmer Renaud Bédard and artist/animator Nicolas "Qiqo" Stephan. The two built an obstacle course of a game "about physical memory, and how much finger gymnastics you can memorize/perform under the pressure created by big red spiky rolls of death coming at you," Bédard explained. 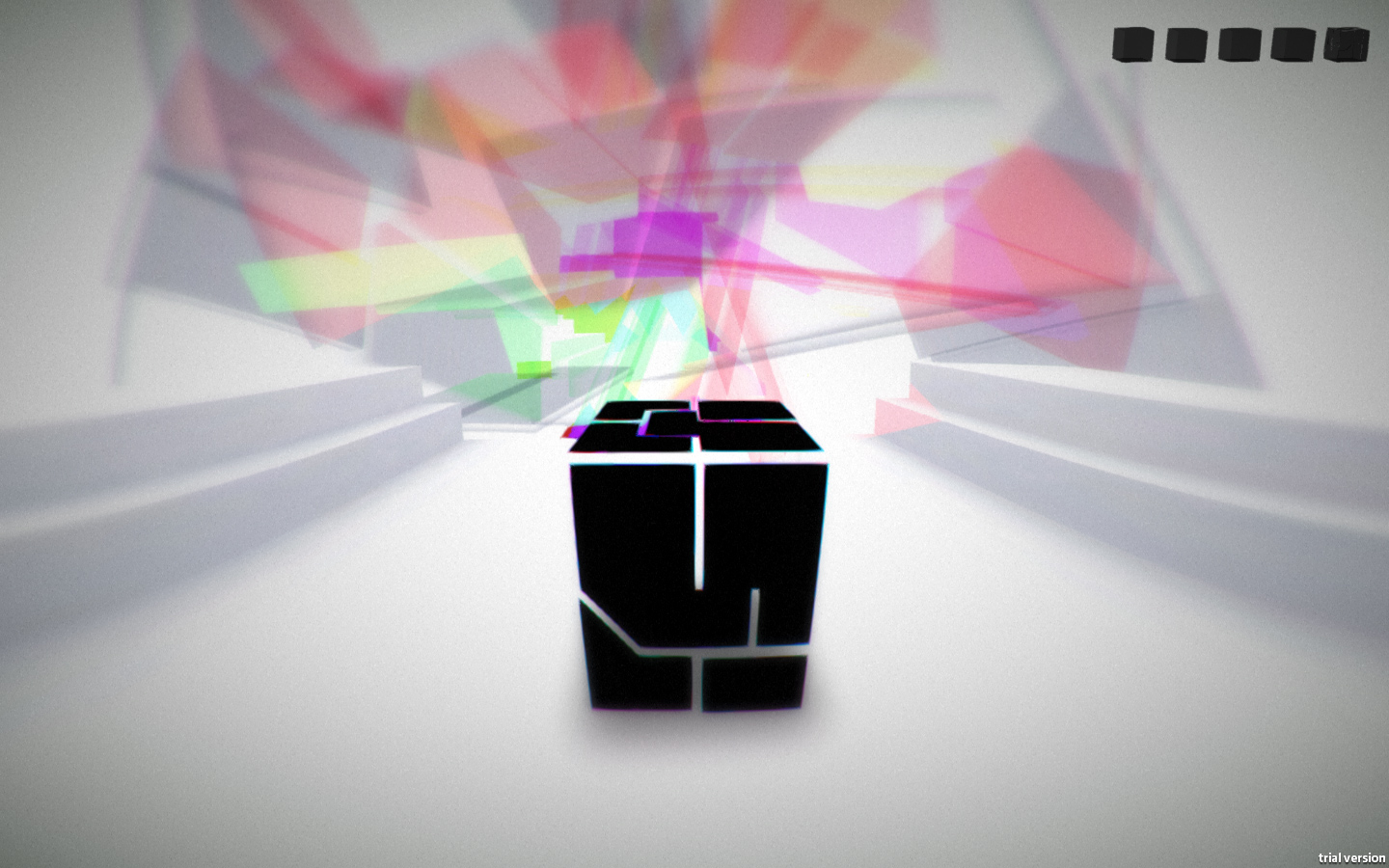 In an email, Qiqo explained how the two created Synchroma, a game that didn't really gel until later in the game jam process.

"Renaud and I struggled at first to find game ideas," he said. "We scoured YouTube videos and even tried a few random name generators for inspiration. Eventually we started to talk about certain things we'd like to try. Renaud was playing around with the idea of color mixing and I really wanted something that involved transforming environments, much like the ones seen in DmC."

"Since we were both fans of hard games that required adaptation from the player, we wanted to give the player a really hard time ALL the time," he explained. "This is when the sadistic idea of randomized controls came up. From there, it very quickly funneled into having a randomly assigned combinations of button presses for different actions on our character."

"I really wanted to make a contrasting and immaculate environment akin to what we'd see on 3D models with ambient occlusion passes in order to mirror the Cube's simplicity," Qiqo said. "Of course, the color scheme remained very simple but not entirely void of color thanks to the Cube's three glitchy colors."

Qiqo said the plan was, at one point, to add even more controls for the cube: slowing it down, speeding it up, squeezing it left or right.

"It became incredibly difficult to remember that many combinations," he said. "It was also very, very hard to quickly string them together. However, the real reason we didn't add anymore than three was due to the time constraints needed for testing and designing.

"Given more time, we might have added different actions or even different types of possible inputs. Kinect maybe?"

Speaking with Capy Games president Nathan Vella at the Fangamer X Attract Mode art show, where Synchroma made its publicly playable debut, he said the studio has thought about releasing a version of the game commercially in some form, but has no firm plans to do so. Qiqo said that while the studio wants more people to play it, "At this point we're not sure how exactly we'll get it out there."

"There's a lot of pieces to that puzzle, and a lot of questions to answer," he said. "But after the positive response at the FanGamer X Attract Mode party ... we definitely feel like we've got something fun on our hands."