Monument Valley and the art of visual trickery

Share All sharing options for: Monument Valley and the art of visual trickery

ustwo Games' latest title is a puzzle game built on the pillars of architecture, geometry and illusions. Or, as designer Ken Wong calls them, magic tricks. Monument Valley is what the developer imagines Escher would create today: a world of surreal landscapes that "make your brain kind of backflip." The touch-based title uses 3D elements in a 2D world to create gameplay that defies the laws of physics.

We spent time with the Monument Valley beta, which is currently taking testers. The game's purpose is simple enough: navigate protagonist Ida to the end of each level. But moving Ida through a world of broken platforms requires both foresight and a little experimentation. Sidewalks can be spun with the swirl of a finger, or entire towers lowered and raised with a swipe. Enemies that blocked our path were easily trapped by flipping the ground upside down.

The levels we demoed hit a timely balance: long enough to keep us feeling challenged each time, but short enough to pick up and play on a train ride. According to Wong, Monument Valley was designed to deliver a briefer experience with an emphasis on the best presentation of mechanics.

"We try to find the most elegant way of expressing a certain idea or trick, and leave out the 'fat'," Wong said. "Every scene in the game has something new to learn or a new visual twist." 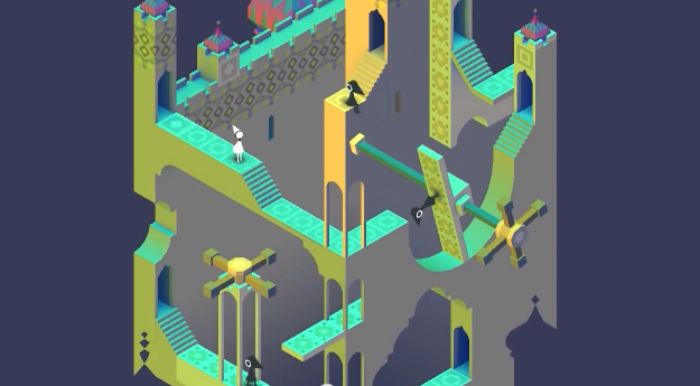 Monument Valley's mechanics became more complicated as we progressed. While the first level taught us how to move Ida with a finger tap, future explorations were about shifting the world itself. By tapping certain pieces of the game's colorful level, we could spin or raise platforms to open new paths. During a particularly challenging level, we were matched with a bright-faced, pillar-like creature that could be moved by sliding our finger. By moving the creature to form new bridges — much like the way an Escher painting creates a path where there logically is none — we were able to proceed.

"There seems to be so many ways to create a puzzle that doesn't quite work," Wong said. "We want players to figure things out themselves without instructions, so the puzzles have to sort of hint at what's possible. At the same time, we want the player to be surprised and delighted, so we also have to keep some things obfuscated."

Puzzles must work on three levels: gameplay, architecturally and graphically. Each level has a story to tell, though few words are present. Wong called the game's themes more impressionistic and symbolic than narrative.

"The storytelling in the game is more akin to a song than a book or movie," Wong said. "The player can enjoy the game on whatever level they choose, and come away with their own meaning."

Monument Valley is being developed for iOS devices. According to Wong, however, a release on other platforms isn't out of the question.

"A console version would be amazing to work on," Wong said. "... If enough people want us to release on their platform then we'll definitely consider it."