While the Oculus Rift was busy winning Best in Show from our pals at The Verge (for the second year in a row!), Sony was showing off the latest version of its HMZ-T3 head-mounted display equipped with a module on the back of the headband that, despite its small size, enables one massive feature: head tracking.

The sign at the booth called it a "technical prototype" and the representative helping booth goers into and out of the headset was quick to reiterate that status. And it's a good thing that's being highlighted because at a staggering $999 — and that's without head tracking! — the HMZ-T3's experience absolutely pales in comparison to the still-in-development Oculus Rift.

Oculus is at CES showing off the latest revision of its still pre-release headset — this revision is dubbed "Crystal Cove" — and with a $300 asking price on the now-available developer's model, you could buy three of them and still have enough left over to get some games.

Sony's prototype was using a 170 degree video of a motorcycle going through an English village, allowing viewers to look around left and right, and even tilt their heads. Despite some quick tinkering, I wasn't able to easily get the headset in focus and the display let in so much light below it that it was a notably distracting experience relative to the light-tight Rift. 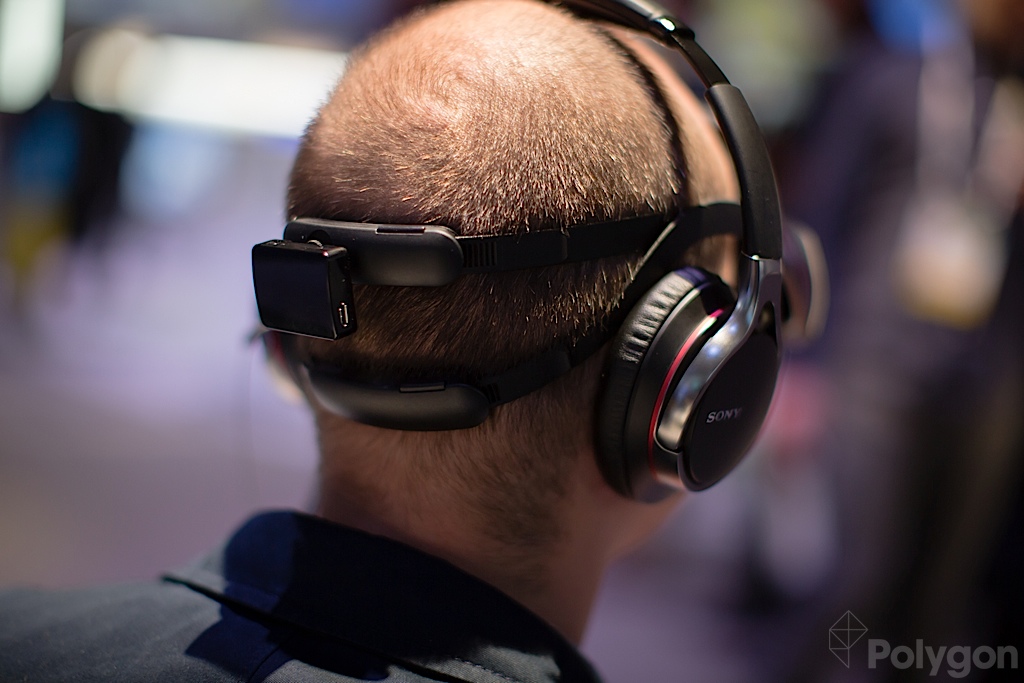 It also struggled to keep up with my quick head movements; after just a minute or so, looking "forward" had the camera pointing all the way to the right of the video image. The Sony rep had to recalibrate the resting state so I could look forward normally again. And even when it was calibrated properly, the input lag was noticeable. Other demo stations lacked the head tracking module, and offered the option to play PlayStation Mobile games with a DualShock 3, simply emulating a large screen experience for games that don't demand it.

With a focus on portability — it has a battery and can interact with a mobile phone — the HMZ-T3 is certainly going after a different audience than the Rift. But with a background in consumer electronics, displays and video games, Sony seems particularly well suited to be serious competition to Oculus, a startup run by a 21-year-old that continues to gather hype and wow journalists and developers alike. Instead, the HMZ-T3 is focused on portable video playback — whether the source of that video is from a camera or a video game — and not on virtual reality.

With no spec sheet, no release plans to share, and not a lot of practical applications for head tracking without game developer support, it's hard to be upset over the shortcomings of the prototype on display at CES. But I hope that if Sony officially wades into the exciting virtual reality arena, that it comes better equipped than it did this week.