How I spent my first day waiting for the world to end in Lightning Returns: Final Fantasy 13

Share All sharing options for: How I spent my first day waiting for the world to end in Lightning Returns: Final Fantasy 13

Square Enix's previous two Final Fantasy 13 games, for their individual strengths and weaknesses, are notorious for both having slow starts. Final Fantasy 13 took upward of 20 hours or more before the game finished all of its tutorials and finally gave players full control over its systems. 13-2 improved on that with an action-packed prologue, but you still had to slog through a slow first chapter before the most interesting elements were unlocked.

Lightning Returns: Final Fantasy 13 — the third and seemingly final game in this branch of the long-running RPG series — sets itself apart immediately. A gorgeous opening cutscene reintroduces Final Fantasy 13 protagonist Lightning, who is perched on a clock tower, grimacing like a futuristic Batman. She's talking to someone out of sight, presumably through a communication device of some sort. The voice will be familiar to those who played the previous games — it's Hope, the young, whiny teenager who grew into his own as a character in the sequel.

Without much in the way of setup or context, Lightning leaps from her vantage point, heading into what appears to be a nightclub. The revelry is interrupted as she gets into a fight with a bunch of monsters who seem to be allied with — surprise! — Snow, another of her allies from the past games. Lightning Returns wants you to get pulled right into the action and drama immediately.

So what the hell is happening? Where is Lightning? Why has Snow seemingly turned bad?

After one day in Lightning Returns' world — around five hours of playtime — I'm still digging for a lot of those answers. What I've pieced together so far is...complicated

Events at the end of Final Fantasy 13-2 left the world in a perilous situation. Chaos has been unleashed and time itself has ceased to function correctly. There are two major side effects of the timeline being messed up: First, everyone has stopped aging; and second, the world is about to come to an end under the strain of its metaphysical problems.

Enter Lightning. Stuck as a statue at the end of 13-2, she is awoken sometime before the events of Lightning Returns by a mysterious god-like figure. Er, maybe "a mysterious god-like figure" is more subtle than necessary. Lightning and Hope refer to it as "God." The God. They are given a mission to save souls by preparing them for the next world that God is creating. And they have a secret base in a realm that looks an awful lot like the traditional Christian view of Heaven.

So this game is weird.

All of this exposition is dumped on me shortly after the intense opening scenes, after Snow has escaped to continue taunting us later in the game. Hope explains everything, standing in front of a giant computer monitor in Heaven (they call it "The Ark"), where he serves as the Charlie to Lightning's Angel. Frankly, it's a lot to take in, and while I'm still doing so, the game teleports me back down to the planet. Time is ticking, after all.

My first night in the doomed city of Luxerion is devoted to tracking down a murderer — a sequence I had already witnessed a year ago in my first look at the game. But now in control, I'm able to explore more of the city and piece together a little more of what's going on.

With the end of the world approaching and the city constantly under attack by monsters, Luxerion has turned into a place of religious devotion. Most of the citizens worship the same God that has sent Lightning back to the world — and indeed, they even have legends telling of a pink-haired savior who will descend from the heavens and save their souls.

On the other side, and seemingly tied to these murders, rests a fringe group of heretics who worship Etro, the long-gone goddess of death. One of the main goals I'm given early on is to scour the city for a password that will let me infiltrate this cult and determine if they're actually behind the killing. But before I can accomplish that, the clock hits 6 a.m. and I'm unceremoniously pulled back to Heaven.

You see, being a servant of God comes with rules, one of which is a curfew. Sort of. Once every day at 6 a.m., Lightning must return to The Ark and submit a report to God about how many souls she has saved. Each person you help pushes back the end of the world just a bit. At the start, a mere six days were left on the calendar. At this first tally, I've done enough short sidequests — fighting monsters, finding lost trinkets and the like — to add one more day to the total.

On day two, I'm meant to track down numbers making up the access code that will allow me to infiltrate the cult, but I accidentally miss my chance to enter the slums, a section of the city that's only unlocked for a handful of hours each day. Thankfully, the game offers up a number of sidequests and alternate paths that I can take on at any time. For the morning, I decide to try my hand at helping the lone survivor of a group of bounty hunters who were paid to take down a monster that has taken up residence in one of Luxerion's alleyways.

Like everything else in Lightning Returns, the battle system has been massively overhauled compared to the previous two games. Though Final Fantasy 13 and 13-2 both had faster, more intense combat than most Japanese RPGs, Lightning Returns goes a step further. You only control Lightning and almost every fight I've seen has been one-on-one or — with smaller creatures — sometimes two-on-one. Blocking and attacking at the exact perfect moment is a requirement to defeating foes, making timing more important than ever.

Lightning Returns' combat is extremely challenging but in a very different way from the previous games. I'm having a lot of trouble wrapping my head around how it works, around how to stun monsters, knock them back and stop myself from taking crazy amounts of damage while I'm in the middle of an attack. It's somewhere halfway between the fast, menu-based battles of Final Fantasy 13 and a full-on action game, and it's difficult figuring out where to balance my skills between those two.

It doesn't help matters that Lightning Returns doesn't have a traditional leveling system. Rather than gaining experience points from each battle, Lightning gets stat boosts as rewards for completing quests and saving souls. But that means there's no way to grind out a solution if you get stuck.

And I get stuck hard on this monster-hunting sidequest. The beast I'm trying to destroy — a massive creature known as a Zomok — can kill me in three or four hits if I'm not fast enough to block its every swipe. It also has an absurdly large health pool that I can barely make a dent in. 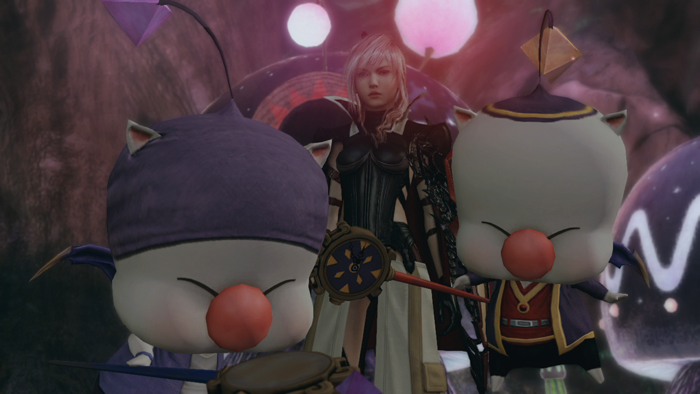 I swap between outfits — the game's method of switching classes — only to discover that my Red Mage's blizzard is largely useless, as is the melee-focused Nocturne's sword swings. My Providence class has "Sparkstrike," an ability that mixes melee and thunder; this is the only skill that even makes the beast flinch. And it's not enough. I hold my own against the Zomok for a good five minutes, but it inevitably defeats me, prompting a reload.

As excited as I was for Lightning Returns to try something different with the series, my frustrations with the combat extend to all aspects. I'm only a day into my investigations into this strange world, but I know that time is limited. It's tough feeling like I'm getting tripped up on basic mechanics and struggling to understand the story while I've also got the pressure of the impending end of the world weigh on me.

Maybe things will come together and make more sense as the apocalypse approaches, but right now it's all a little bewildering.

My full review of Lightning Returns: Final Fantasy 13 will be posted on its release date, Feb. 11.