From epic to album: Behind the scenes with the soundtrack of The Banner Saga

Share All sharing options for: From epic to album: Behind the scenes with the soundtrack of The Banner Saga

The Banner Saga uses many tools to grab the player, but the game’s use of music is particularly effective.

The music was written by Grammy-nominated composer Austin Wintory, and the soundtrack is available now. It’s a strong, evocative score, but putting together a linear soundtrack, complete with discrete tracks, is very different than writing the music for a game that could be played in many different ways.

I became taken with the 16th track on the soundtrack, called "Three Days to Cross," and Wintory agreed to walk me through the process of taking a piece of music for a game and bringing it to a soundtrack. Video game soundtracks, and how music is written for games in general, is a complex, often unsung part of development.

From game to album

Let's listen to the song before we get any further.

"This is actually a remarkably simple song compared to a lot of the others," Wintory said when I told him which piece of music had grabbed me. "The album has 29 tracks but in reality there are over 200 'tracks,' more accurately called cues in the game, and the album is a reconstruction of how they interweave in-game. Track 16 is actually just 2 cues, so it's quite simple."

This is why writing music for games is unlike film or television. Different game events trigger different cues, which causes combinations of music to play to add weight and emotional resonance to what’s happening to, or because of, the player.

"I don't ever write cues meant to capture mechanics," Wintory explained. "So for example in The Banner Saga you engage in a lot of battles. I didn't write 'battle music' which plays every time you go to battle. It was always written based on where that battle takes place in the context of the overall story and emotional arc."

The initial traveling cues lean on the brass, and Wintory described the goal as being "a day in the life of a soldier." Someone who is proud and honorable, but isn't exactly spending his time in the thick of battle. 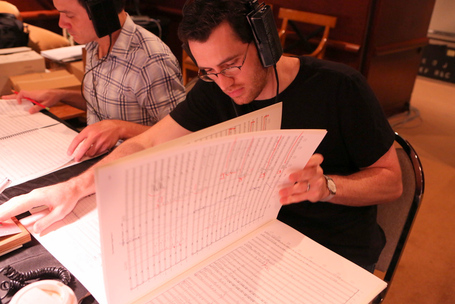 "As you might expect the story quickly takes a turn, where our focus shifts to a father/daughter story struggling to survive an emergent, rather apocalyptic threat," Wintory said. "Here the music gets very intimate, leaning on solo violin, played gloriously by Taylor Davis, and using primarily the woodwinds from the orchestra."

The characters eventually reach an ancient city, which leads to a fuller, more majestic cue, and Wintory made the music leading to that moment "smaller and smaller" in order to maximize the impact of the scene.

"So THAT is what you are hearing in Track 16, 'Three Days to Cross.' It's actually two cues, and they play in the opposite order in-game," he explained. "The first 30 seconds, the unaccompanied flute solo, in-game come after the second section, which begins with the violin solo before handing off to the orchestra. There is also a lot flanking those cues in-game, including possible combat interruptions and such, which obviously change the music on the fly."

"It's a fascinating, equal parts wonderful and agonizing process to completely step back and reevaluate one's music in order to translate it from game score to album. There is no standard approach I've found," he said.

"I remember when doing both flOw and Monaco I ended up basically totally re-writing the soundtrack for album purposes. It is a literal re-write in order to make it feel right as an album. If I did my job right, no one ever noticed. In the case of Journey, much like The Banner Saga, the music wasn't re-written but it was stripped apart rather heavily and rebuilt using the raw guts."

The process of turning a game’s score into an album is more complex than people assume, but creating the music to start with is just as intricate. It’s a long, complicated process, and one that players rarely consider when playing games.

"First I always play the game, or if it's not playable, have lengthy discussions with the developers about it. After it's been determined that a specific moment will need some music, I try to wrap my head around exactly what the player's experience in that moment will be," Wintory said. "Certainly this is best done by playtesting and becoming a player. I can see what the nature of the mechanics are. How does it move. How deeply interactive is it?"

The game itself helps to define the music, and gives the composer guidance. "For The Banner Saga it became clear that something raw, earthy and even dirty would be needed. The sort of shimmering spirituality of Journey is nowhere to be found here," he explained. "It's got a sort of gentle sadness, but through the lens of proud, mighty warriors. All of the came from the game, so it was a matter of exploring musical ideas that seemed to capture that."

The cues are then mocked up using a "DAW," or digital audio workstation, that contains libraries of most instruments. I asked for a comparison of the mockup to the final track, and you can listen to the difference in the embedded file below. The first half of the audio is the mockup, the second half is the final track.

Everything is mocked up and tested before the score is recorded with the orchestra; recording that many musicians is a complex, expensive process, so it's important to make sure the score is as complete, and tested as much as necessary, before recording.

"The bottom line is that however it's supposed to work, we mock that up and playtest it so that we're not recording 'coverage,' as you called it, in an effort to buy us options later," Wintory told Polygon. "Periodically you have to do that for various reasons, namely that you're under too much time pressure to compose the score and can't properly playtest the implementation before recording, but I avoid it like the plague.

He also sometimes records soloists in his studio to augment these early versions of the tracks. In fact, the influence of live musicians can become a large part of the composition, as was the case with The Banner Saga. Taylor Davis is the violinist you hear in the track, and Wintory found her after watching a video of Davis performing a song from Journey, complete with cosplay and an epic video.

"I loved her sound and was very moved by the gesture. So I hired her for this game; she ended up being the heart and soul of it," Wintory said. "It's not quite a violin concerto-esque approach in the way Journey is like a cello concerto, but nonetheless she's the spiritual heart. She lives in Detroit, so we did all the recording remotely. We would Skype and text and talk on the phone and she'd send me recordings which I'd then give feedback on, etc."

Alex Thomas is the creative director of The Banner Saga, and he also stressed the collaborative nature of the project.

"In a lot of ways we did things a little backwards from the standard procedure &mdash; we often had music before content, and I was able to write some conversations with a specific piece of music in mind," Thomas said.

"The collaboration was extremely congenial, and Austin would volunteer himself to fill in the gaps where needed. I think after that day of hooking up all the tracks we had he left on a plane to go write 50 more minutes of music, just because we needed it. That in itself is incredible."

Working with a nimble team also allowed the music to guide the development as the development guided the music. "In a AAA production there are a lot of road-blocks to a process like that. You can't just make a text change, get it approved and re-recorded within a day, or even a week," Thomas explained. "Without those sort of restrictions I was able to change things almost instantly."

The Banner Saga has an amazing soundtrack, but what's fascinating from a design standpoint is the humanity behind its creation. Many in the industry have an image of a single person sitting behind a keyboard or in front of a computer program writing the music for most games and, while some music for games is indeed created that way, that cliche is often inaccurate.

The best soundtracks come from an open, deliberate collaboration between the game and the music, the developers and the composer, the composer and musicians as well as the conductor and orchestra. It's a long, intensely human process that benefits both the game and the player.