When it was recently revealed that social game developer King.com filed to register the trademark for the word 'candy,' the response from fellow developers and game players was less than kind. The company, best known for making the highly successful puzzle game Candy Crush Saga and other titles in its Saga series, was accused of throwing its weight around and intimidating small developers.

King's move has raised concerns that if the company successfully trademarks 'candy,' no one will be able to use it in any of their game titles. To many, it also seems unfair that a big developer should be able to "own" a word. A candy-themed game jam even popped up in response to the trademark registration. But according to legal experts Polygon spoke to, it's more complicated than that, and there's more to it than just a word.

This does not mean that all candy references would be off-limits.

First, it's important to note that King doesn't currently own the trademark for 'candy.' The company has filed an application for it and, at the time of writing, it is about to be published for opposition. When an application is published for opposition, there is a 30-day period where any third party can object to the registration on the grounds that it could negatively affect them. Until this process is completed, King doesn't have a legal claim to 'candy.'

But say the application passes through the U.S. Patent and Trademark Office with no opposition and King receives the trademark for 'candy.' This does not mean that all candy references would be off-limits. Under U.S. law, trademarking is less about owning a word and more about protecting a brand. The company could not, for example, prevail in a lawsuit against a company that made a game with the word 'candy' in its title if said game was released before Candy Crush Saga. Under trademark law, the "senior user" of the word would prevail. If King — or any company, for that matter — were to take a developer to court over the use of a trademarked word, the onus would be on the plaintiff to prove that a reasonable person in that market would be confused into thinking that the defendant's product was related to the plaintiff's.

"If I got a cease-and-desist letter on behalf of a client who had a game that involved candy, I would respond by saying, 'You may own a registration, but unless you can prove that consumers are being confused between my game and your game, you should not be able to prevent me from using a descriptive word in the title of my game,'" attorney Jesse Saivar of law firm Greenberg Glusker told Polygon. "And that's really what the key is here: If the word 'candy' is used on its own in the title of the game that involves candy, King.com really should not be able to successfully obtain registration, because under trademark law, you can't own exclusive rights to a word that is descriptive of the goods or services being offered under that trademark.

"This is where you have to make the distinction between the Trademark Office allowing a mark to be registered versus what they can do with it in court if they ever decided to sue on it."

"...you can't own exclusive rights to a word that is descriptive of the goods or services being offered under that trademark."

According to Saivar, there are the practical benefits to having a trademark registration, and then there are the true legal benefits. Simply owning the trademark does not mean a company will prevail in court. On the practical side, Saivar says that companies can send cease-and-desist letters. Many smaller companies tend to concede and change the name of their products due to fear of further legal action.

In one recent example, app developer Benjamin Hsu received a notice from King via Apple that his game, All Candy Casino Slots - Jewels Craze Connect: Big Blast Mania Land, infringed upon King's rights over the word candy. In an email received Jan. 19, 2014, King said: "We are the owners of CANDY, in the EU, US and elsewhere. The prominent use of our mark by this developer infringes our rights and is likely to lead to consumer confusion and damage our brand. Please remove this app as soon as possible."

Hsu told Polygon he followed up with King's representatives, explaining that he had no intention to confuse consumers and didn't believe that his app did so. King responded by saying that Hsu's use of the words "Candy Slots" in his app's icon amounted to trademark infringement, and reiterated the notion of consumer confusion.

"My intentions definitely were not to confuse players as they alleged or make people think that my game was in any way related to Candy Crush," Hsu told Polygon. "I just wanted to make a candy-themed game, as many other developers have done. I thought it was a fun and playful theme."

Hsu told Polygon he was surprised and upset to learn about the trademark, but felt that there was nothing he could do about it. One option was to hire a lawyer and fight it, but that would be costly, time-consuming and not within the means of an independent developer. When asked if he considered calling King's bluff, Hsu said it never crossed his mind.

"I was afraid that if I called their bluff, it would get worse," he said. "Maybe they would fine me or take me to court. I just did not think about calling their bluff."

While King didn't own the trademark to candy when it sent the cease-and-desist letter to Hsu, Saivar explained that as long as a company has a good-faith belief that it has rights in a mark, it's within its rights to send a cease-and-desist letter. It's up to the recipient to decide whether or not to dispute such a claim.

In a statement to Polygon, a King spokesperson said: "We have trademarked the word 'CANDY' in the EU, as our IP is constantly being infringed and we have to enforce our rights and to protect our players from confusion. We don't enforce against all uses of CANDY — some are legitimate and of course, we would not ask App developers who use the term legitimately to stop doing so.

"The particular App in this instance was called 'Candy Casino Slots - Jewels Craze Connect: Big Blast Mania Land', but its icon in the App store just says 'Candy Slots,' focussing heavily on our trademark. As well as infringing our and other developer's IP, use of keywords like this as an App name is also a clear breach of Apple's terms of use. We believe this App name was a calculated attempt to use other companies' IP to enhance its own games, through means such as search rankings."

The legal benefits of trademarking a word are not as strong as the practical benefits, though. If a company were to call King's bluff, Saivar believes it is unlikely that King would move forward with a federal trademark infringement lawsuit to prevent a third-party game developer from using the word 'candy' to describe a game that involves candy.

The test used in courts to determine if a trademark has been infringed upon is whether the use of the word in a product's name would likely cause confusion. A company like King would have to prove that it does cause confusion, whether it be through surveys or correspondences (like emails and tweets) received from customers complaining that they were duped into buying the wrong product due to confusion caused by branding. And that's the key here: Has King built a house brand in the word 'candy' so when people see the word, they associate it with King's games? Would the company be able to prove in court that it has built up such a brand awareness in the word 'candy' that they should have the exclusive rights to it? That is the challenge the company would face if the matter were taken to court.

King's move to secure 'candy' is not the company's first attempt to protect a single common word with a trademark application. In 2011, King successfully registered the trademark for the word 'saga' under the provision of "computer games online or by means of a global computer network, providing interactive multi-player computer games... multimedia publishing of computer game software and video game software." Other companies also own the trademark for 'saga' under different categories of goods and services. With a large portfolio of games featuring the word 'saga,' like Bubble Witch Saga, Pet Rescue Saga and Pyramid Solitaire Saga, it is arguable that the word has become associated as a King brand. 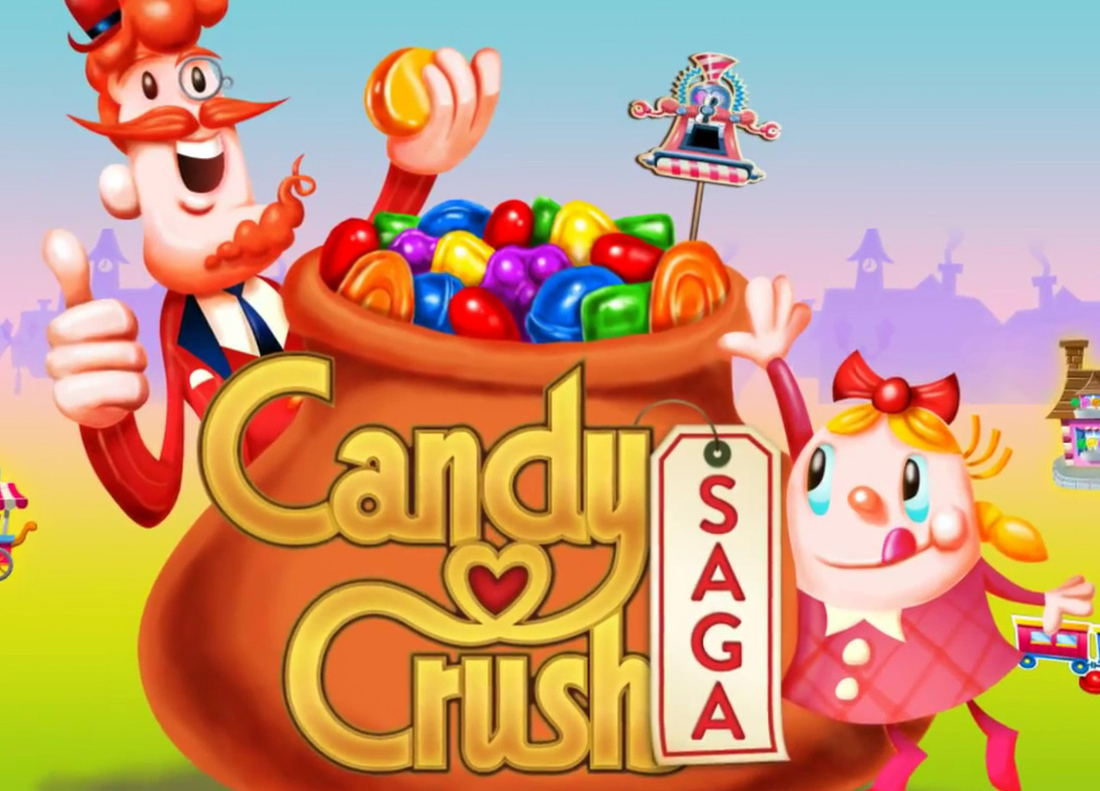 King has been fairly active in monitoring the use of the word 'saga' by other developers. The company has filed many requests for extensions when other companies have tried to register a trademark with the word 'saga' in it. A request for an extension of time extends the 30-day period where third parties can oppose a registration. While the filing for an extension of time is not the same as filing an opposition, it indicates that the company making the filing is considering opposing and is asking for more time to make its decision. It also puts the trademark applicant in limbo, as they cannot proceed until the waiting period is over.

The company filed for an extension of time with Stoic LLC's The Banner Saga and, in December 2013, filed an opposition against the title, the status of which is currently pending. The Banner Saga launched earlier this year. Developer Stoic declined to provide comment for this story.

Common words are trademarked every day. But just because it's common doesn't mean it's OK, according to the organizers of the Candy Jam, a game-making event that launched in response to the news of the trademark filing. Created by game developers Caribou and UUAV, the event encourages game developers to make candy-themed games and use the word 'candy' in their titles. The event's tagline reads, "Fight Trademark Trolling — make a game. Why? Because trademarking common names is ridiculous and because it gives us an occasion to make another game jam." We have reached out to the event organizers for comment.

While King's registration to trademark 'candy' may be seen by some as a large company unfairly seizing ownership of a word, Saivar says it is worth considering that King is taking steps to protect its Candy Crush brand, which, no doubt, has been capitalized on by many other developers.

"Under the law, other developers are certainly allowed to capitalize on [the Candy Crush] craze," Saivar said. "But if they are doing it in a way that is confusing people into believing that they are buying the Candy Crush when they are in fact buying some third party's game, then they are violating the law.

"And that's just a facts-based question: Are consumers being confused? And if they are, then King.com has a legitimate claim."