Like Microsoft, publisher Electronic Arts is also compensating YouTube video producers who post footage of its games, including titles Battlefield 4 and Need for Speed Rivals, according to documents posted on NeoGAF.

Under EA's program, named Ronku, video producers could earn money for showing footage of the next-gen versions of Battlefield 4 and Need For Speed Rivals. Certain Ronku "assignments" encouraged highlight specific moments in EA's games, such as demonstrating "how you will cross the line" in Need for Speed Rivals, or taking down an entire skyscraper in Battlefield 4 multiplayer. Participants for both games could earn $10 per thousand video views for a maximum of three videos.

According to the agreement, participants could not post copies of the assignment or document agreement without written consent from EA. Past assigned games included titles such as FIFA 14 ($10 CPM), Madden NFL 25 ($15 CPM) and Plants vs. Zombies 2 ($10 CPM). 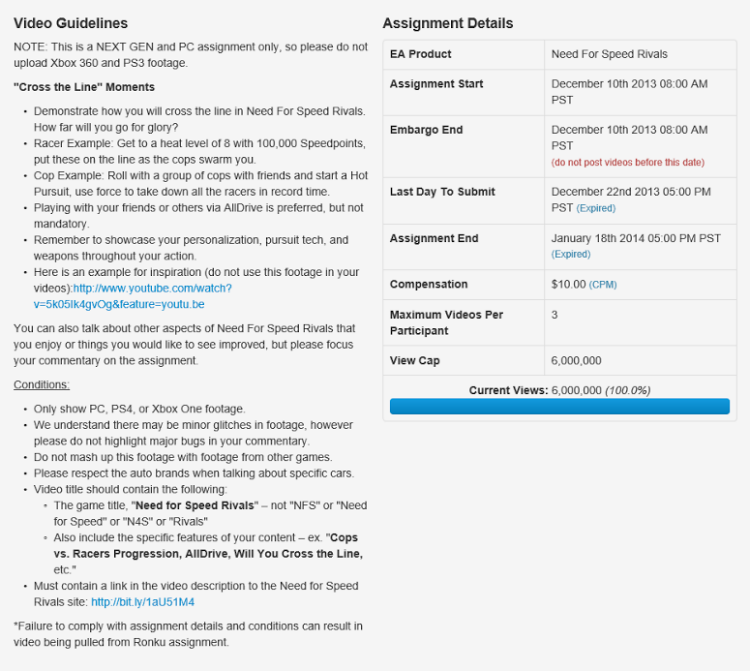 We've reached out to EA for comment and will update accordingly. In a comment provided to The Verge, a company spokesperson confirmed the company's Ronku program.

"Through EA's Ronku program, some fans are compensated for the YouTube videos they create and share about our games," the spokesperson said. "The program requires that participants comply with FTC guidelines and identify when content is sponsored. User-generated videos are a valuable and unique aspect of how gamers share their experiences playing the games they love, and one that EA supports."

"We explicitly state in the Terms & Conditions of the program that each video must comply with the FTC's Guidelines concerning Use of Testimonials and Endorsements in Advertising."

The report comes after Microsoft paid Machinima video partners to promote the Xbox One. Content producers were apparently paid $3 CPM bonus for posting a video that contained at least 30 seconds of Xbox One gameplay footage within the first two minutes and made verbal mention of playing on the console. In a statement issued to Polygon today, Microsoft and Machinima said the YouTube deal was a "typical marketing partnership."