The Denver Broncos will defeat the Seattle Seahawks in Super Bowl XLVIII this Sunday — in overtime — according to a simulation of the matchup in Madden NFL 25, publisher Electronic Arts announced today.

Every year, Madden NFL developer EA Tiburon pits the two Super Bowl teams against each other in the video game to simulate the Super Bowl and see what happens. This year, the studio played out Super Bowl XLVIII in Madden 25 on Xbox One, and the big game came right down to the wire.

Perhaps owing to the blanket of snow on the field, defense ruled the first half of the game. Late in the second quarter, outspoken Seahawks cornerback Richard Sherman picked off a Peyton Manning pass and took it to the house to send the Seahawks into the intermission with a 10-7 lead. The Broncos struck back in the second half with a Demaryius Thomas touchdown and a Knowshon Moreno goal-line plunge, going up 21-13 by the end of the third.

Even after a Wes Welker touchdown reception early in the fourth put the Broncos up by 15, the Seahawks refused to go quietly. Russell Wilson got them back into the game with a touchdown pass to Golden Tate. With time running out, he ran the ball into the end zone on a last-second two-point conversion following a touchdown run by Marshawn Lynch to send the contest into overtime. 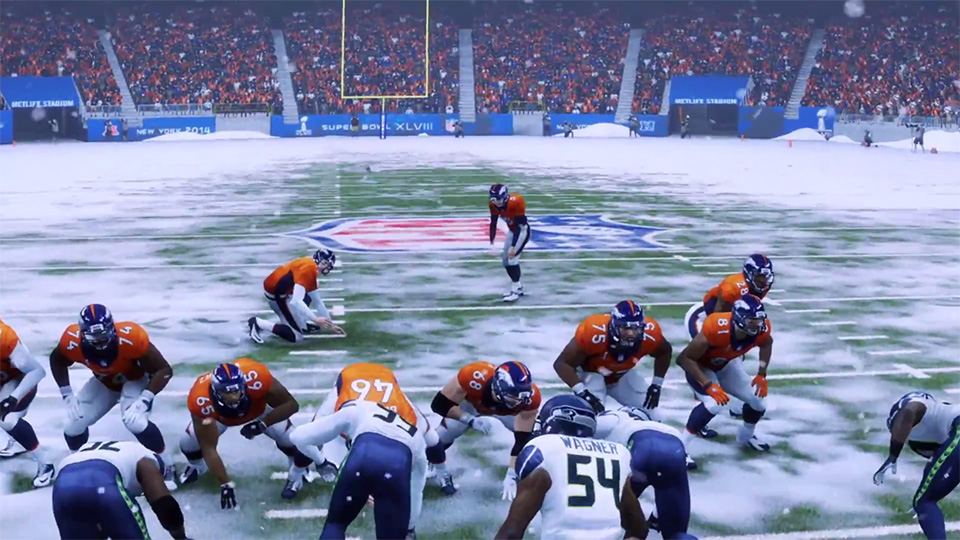 The Seahawks started overtime with the ball but were forced to punt. The Broncos' ensuing drive went to the Seahawks' 30-yard line, where Matt Prater kicked a 48-yard field goal to give his team the 31-28 win and the Lombardi Trophy in the first overtime in Super Bowl history. Manning took home the MVP award, his second, after going 32-of-44 for 322 yards with three touchdowns and one interception.

EA Tiburon's annual simulations have correctly predicted the winner of eight out of the last 10 Super Bowls, including the Baltimore Ravens' victory over the San Francisco 49ers in Super Bowl XLVII last year.

The real-life Super Bowl XLVIII will begin at 6:30 p.m. ET on Sunday, Feb. 2, at MetLife Stadium in East Rutherford, N.J., the home of the New York Giants and New York Jets. The Super Bowl will be televised on Fox, and the network is also livestreaming the game through computers and mobile devices.