Basement Crawl is harder than it looks.

Infused with equal parts Bomberman and B-movie horror film, this maze-based multiplayer game is about blowing up your friends and feeling great when you do. Basically. The latest title from Polish developer Team Bloober, Basement Crawl's premise is undeniably creepy: deranged individuals fight amongst themselves to claim hold on a sheltered little girl.

Not to hurt her, of course. They just want to be friends.

We spoke with chief technology officer Konrad Rekiec and marketing manager Marc Colhoun recently in San Francisco, who informed us that Basement Crawl is not for the weak of heart in more ways than one. The developer is hoping to snag "hardcore gamers" where they play — in this case, the PlayStation 4.

"We consider PlayStation 4 and Sony players as hardcore gamers," Rekiec said. "Having dealings with [Sony] earlier, we just decided that we know a bit about the players. We think there are a lot more hardcore players than with the Xbox. We wanted to make a game that delivers on that."

We spent some hands-on time with the game, where we faced off against two other players in a deathmatch. Basement Crawl's arena is squared off into a grid-like map, with players scurrying constantly between spaces to kick, throw and drop bombs at will. Our demo included four characters to choose from, each with a different perk. The first character we played as was able to lay down three bombs at a time, while another had more health. These inherent skills are part of the game's strategy, Rekiec said.

"Using the skills that you get is what differentiates the game a lot from Bomberman," Rekiec said. "The game is really skill based. We're targeting hardcore players that will want to explore different variations of the game and try out their skill with other players. The skill is all that matters."

Team Bloober calls Basement Crawl decidedly different from its Bomberman roots, but is cognizant that it might appeal to fans of that franchise. Nostalgia is a powerful tool and it's something that Team Bloober is playing up, especially in the wake of a new console generation. However, it's not the team's only goal. Local multiplayer in combination with global multiplayer opens up more options for playing with strangers and friends — and modernizes the game in a way most titles in the genre are not.

"We have local and global simultaneous play, so you can have four friends playing against four strangers," Colhoun said. "The game is at its best when you have the maximum amount of people playing. It's total chaos, but the best kind of chaos. There are explosions everywhere. You just have to think that much quicker. You have to be going all the time." 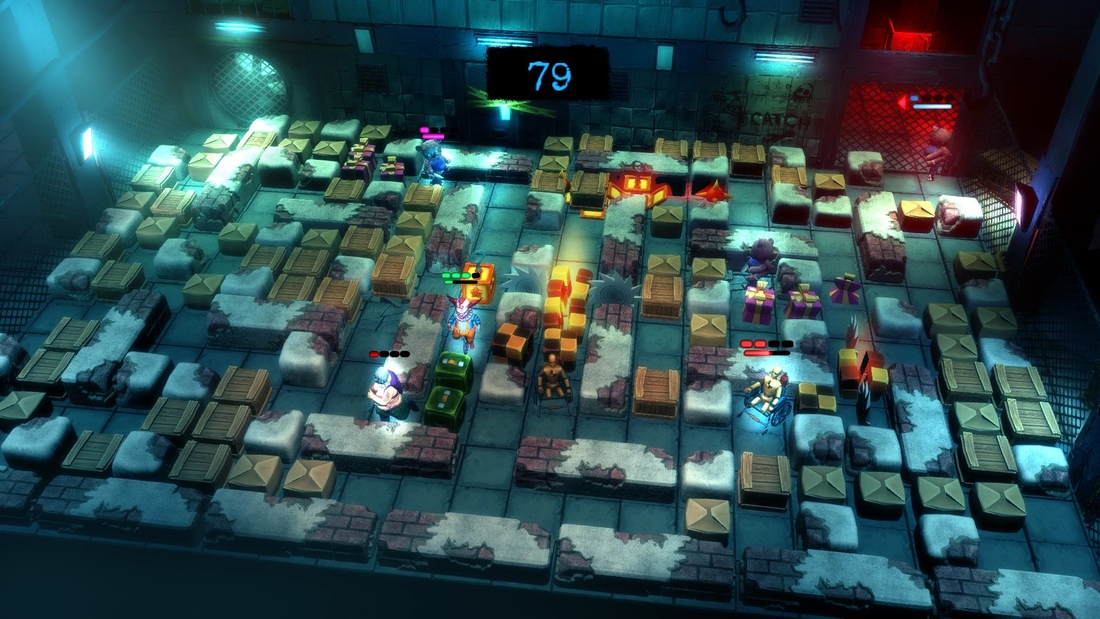 Originally planned as a PlayStation 4 launch title, Basement Crawl was later delayed to the system's launch window. However, that release has been pushed back once more. Team Bloober couldn't specify an exact date and reason for the delay, but said the game would likely be released within the next few weeks.

According to Colhoun, the wait will ultimately benefit the game and its players. As for Basement Crawl's similarities to Bomberman, Team Bloober isn't worried about it affecting players' perceptions.

"There is definitely Bomberman inspiration," Colhoun said. "None of us would ever try and deny that. It's pretty plain to see. But we think it brings a little something to the table. The gameplay is a little bit quicker. It's also pretty unforgiving."

The developer has its sights set on a more challenging experience for players, but it considers it a fair bar.

"Anything that makes you feel like a god, I'm not a fan of," Colhoun said. "I think we all at the company agree that there are way too many games where you have a gun and you are god, and nothing can stop you. I think pretty much every game that we've done has been the exact opposite of that.

"Our game will destroy you. Make no mistake about it."

Update: In a press release sent out today, Team Bloober announced that it would release Basement Crawl worldwide within the first quarter of 2014. CEO Piotr Babieno offered the following statement:

"While the completed version of Basement Crawl was prepped for launch during the last week, several exciting opportunities to partner with major industry players to enhance, refine and add-to the game arose. Although a difficult decision, we decided that the best choice for us, as a team, was to delay Basement Crawl so that we could take full advantage of these opportunities. We will be able to leverage those new partnerships to further grow and improve the game while still providing an amazingly fun multiplayer experience for PS4 owners. We'll be able to announce more details in the days and weeks to come."