Share All sharing options for: Is Ultimate Gay Fighter funny or just offensive?

Ultimate Gay Fighter is pitched as celebration of gay culture. But some reactions to the game's pre-launch publicity have been hostile, charging the 2D fighter with heavy-handed use of cliché and a narrow view of the LGBT world.

In Ultimate Gay Fighter, a forthcoming brawler for iOS and Android, players take on the role of a variety of iconic gay caricatures, including a drag queen, a butch lesbian, an Asian 'twink', a gym bunny, a golden-chain wearing African-American rapper and a drunken bisexual woman. Each character wields a comedic 'gaytality' move that makes reference to common LGBT jokes.

At a time when video games are tentatively beginning to offer up portrayals of gay characters, carefully introduced by developers keen to play fair and to seem cautiously even-handed, it is a sparkling rainbow of a game, splashing about in campy iconography with abandon. It is, undoubtedly, aiming for humor, although not everyone is seeing the funny side.

The game has attracted media interest, some positive, some not. It was due to be self-published by Handsome Woman this month but has been delayed, according to a company spokesperson, "due to interest in the brand from a large organization." No firm release date has been announced.

Polygon spoke to a number of commentators and queer-identifying game developers about the game, and to its developer Michael Patrick. The game's critics say the humor is undone by stereotypical portrayals and a limited perspective, while Patrick, who is gay, says the game is supposed to be funny for anyone who enjoys the diversity of LGBT culture.

"Being a queer identifying player I do find some of these characters funny," said Todd Harper, a researcher on queer representation in gaming at Massachusetts Institute of Technology. "But on the other hand a lot of these go to places I just don't want to go. There are all these playable characters, but only two women one of which is a ridiculous lesbian stereotype and the other is a slut shaming bisexual. The range of stereotypes for gay men is very wide but the range for other aspects of the queer community is very narrow. That is kind of cringe inducing."

Harper pointed to Netflix's selection of mediocre films in its gay and lesbian section as evidence that LGBT art is just as liable to be problematic as any art. "Can queer people make games for queer people that are awful? The answer is, of course we can. We are just as capable of being awful," he said.

He said that the fighting genre in particular is known for its stereotypes, and that Ultimate Gay Fighter has done little to change the status quo. "It's not necessarily bad that we have these stereotypes in games, it's bad that there isn't really another option. There are already so few gay characters in games, and then there is this, that is full of stereotypes."

"This is a gay game marketed towards gay people which is a bit weird because it assumes that is what gay people want," said Mattie Brice, a game developer and commentator. "Very often we don't want stereotyped crap. We might want, in terms of diversity, to be treated just like every other person.

"He's taking larger stereotypes and putting them into his game without much thought behind how that affects people. It's just borrowing tropes for kitsch. It doesn't really speak to anyone."

Brice said she found the racial portrayals especially problematic. "The one that makes me cringe the most is the thuggish black character," she said. "That is the only way that black men are allowed to exist in many fictional settings and they are not allowed to be more nuanced. Putting these stereotypes into the game without being critical of the stereotypes is not really useful."

Brice said that pitching a game as "the first ever gay game" and using the fighting genre, notoriously reliant on stereotypes, was asking for trouble. "The nature of the fighting game is you have these cardboard cut-outs that lack humanity and that doesn't allow for nuance," she said.

Ultimate Gay Fighter is clearly using comedy, as well as fighting mechanics, as its main platform. "It seems like it is made for people who are comfortable enough with the stereotyping and token gays in mainstream media and gay scenes to embrace it with tongue-in-cheek humor," said Toni Rocca, CEO of GaymerX. "Unfortunately, not everyone is so comfortable with them and a lot of people find these stereotypes to be insulting or exclusive even if they identify as 'twinks' or 'bears' themselves."

Rocca added that the game's maker, Handsome Woman, has created problems by failing to focus on the game as a satire in its marketing. He added that, despite its issues, Handsome Woman ought to be encouraged to work on gay-themed titles. "This isn't a mainstream AAA publisher making its fortieth misogynistic, homophobic rampage," he said. "Just because we take a lot of very offensive mainstream titles for granted, we shouldn't be picking on the underdog."

Luke Miller, creator of My Ex-Boyfriend the Space Tyrant said that the game is indicative of a shifting sense of identity. "The old-school activist identity that came out in the '80s and '90s is kind of going away," he said. "The next generation of young gay people just aren't interested in it. We get these products that inherit the icons of the activist era but at the same time they don't represent me."

He said that the game had received "a lot of unfair criticism" and that expecting any game to accurately represent the entire LGBT spectrum is asking too much. "Gay people are so eager to see themselves in games that when a gay character comes along and doesn't represent them they do feel let down, because there are so few examples," he said. 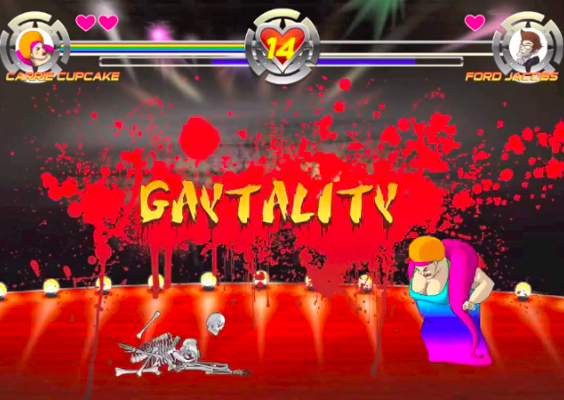 Responding to the criticism that the game offers a lot of two-dimensional stereotypes, the game's maker Michael Patrick told Polygon that was the whole point of the exercise. "It is based on the 2D games of the 90's I grew up with, but there's nothing deep to be pondered in the characters," he said. "I believe that if you have the ability to laugh at yourself and someone's perception of you based on a stereotype, you can ease social tension and realize that stereotypes don't define a person, yet there can be truth in them. The humor and camp of UGF is meant to be taken at face value for entertainment. I say let's just laugh, enjoy it, and live our lives."

On the game's portrayal of women and minorities, he added that Ultimate Gay Fighter had been created by a team "comprised of women and men of all walks of age, ethnicity, and sexuality. "I took common misconceptions of what all lesbians and bi-sexual women are, and made of fun of it. I mean, when Sappho Ethridge hits you, she says 'move in with me.' How can anyone take that seriously?"

Patrick's point is that the game is designed to be enjoyed as a joke. "The world has placed stereotypes on the LGBT community since the beginning of time, and UGF is making a farcical, entertaining game to be appreciated by those with a sense of humor about those stereotypes," he said.