Share All sharing options for: Nintendo eyes health market for next business move

Nintendo is looking to the health sector for its next business move, with company president Satoru Iwata telling an audience of investors and analysts that its focus for the next 10 years is on "quality of life through entertainment."

During the strategy briefing, Iwata said the key word for its strategy is "health."

"Of course, defining a new entertainment business that seeks to improve (quality of life) creates various possibilities for the future such as 'learning' and 'lifestyle,' but it is our intention to take 'health' as our first step," Iwata said.

He acknowledged the recent trend toward wearable devices and said Nintendo is going to "leapfrog" this by trying something different: "non-wearables to monitor your health."

"We wish to achieve an integrated hardware-software platform business that, instead of providing mobile or wearable features, will be characterized by a new area of what we like to call 'non-wearable' technology," Iwata said. "When we use 'health' as the keyword, some may inevitably think about 'Wii Fit.' However, we are considering themes that we have not incorporated to games for our existing platforms. Including the hardware that will enable such an idea, we will aim to establish a blue ocean." 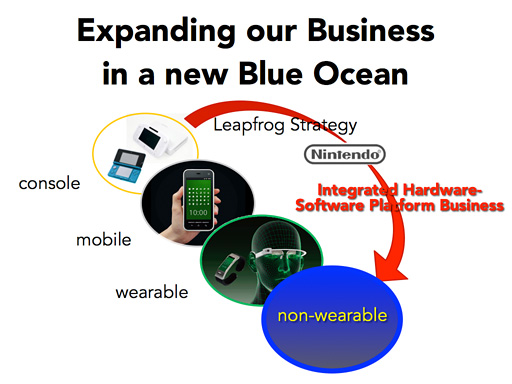 Without going into much detail, Iwata explained that a non-wearable is not necessarily something you will use in the living room.

"What is generally good for health requires some kind of effort to be made by the individual, and, as I am sure that many of you have experienced this, it is sometimes difficult to stay focused and engaged, and it is not uncommon to give up after a few days," Iwata said. "This is where our strength as an entertainment company to keep our consumers engaged and entertained comes into play, assisted by the non-wearable feature, which is the biggest differentiator of this new business field, as well as user experiences that integrate into people's daily lives, all of which help us overcome this difficulty. If we do indeed succeed in doing so, we will be able to provide feedback to our consumers on a continual basis, and our approach will be to redefine the notion of health-consciousness, and eventually increase the fit population."

Iwata went on to explain that by creating this quality of life platform the company will likely discover new themes for new games on future platforms.

"While we feel that this is going to take two to three years after its launch, we expect the QOL-improving platform to provide us with new themes which we can then turn into games that operate on our future video game platforms, too," he said. "Once we have established such a cycle, we will see continuous positive interactions between the two platforms that enable us to make unique propositions."

And that in turn, he said, would allow Nintendo to expand its audience. But those more detailed plans, he added, were topics for a future discussion.

"Today I would like to limit my presentation to the general direction of our new business, but I plan to announce more details within 2014," he said. "I then plan to talk about its specific features and a clearer vision of what we really mean by the term 'non-wearable.'"

The evolution of Nintendo: A gaming great's fight to stay relevant