World of Warplanes needs some tune-ups before it can soar

This combat flight simulator from Wargaming features dozens of classic aircraft spanning the decades around World War II. It models a type of combat from the golden age of flight that has all but vanished from the Earth. It represents a time when common men and women performed uncommon feats of valor.

But that's not why World of Warplanes feels old to me. It feels old in the way that dusty, dated museums feel old, cluttered with lifeless displays and stiff recreations. White-washed history flavored with anecdotes. Content without context.

World of Warplanes' tarmac stretches across six factions: the USSR, Japan, Germany, the United States, Britain and China. Though the sides are real, the game isn't about any one historical conflict in particular. It's a dueling game. The focus is on aerial dogfighting with a few ground targets scattered about for flavor. Without a narrative point of view the gameplay itself stands out in stark relief.

The story it tells to the player is one of compromise.

In the average flight sim, airplanes are hard to fly, and that keeps players away. Wargaming built a flight simulator you can play with a mouse and keyboard, which meant sprinkling a little bit of autopilot into the code.

But the allure of World of Warplanes is unlocking newer, faster and deadlier aircraft, and these upgraded machines don't always gel with the controls. As I climbed the ranks from pokey little biplanes to true, single-winged monoplanes my airspeed increased which meant it required more effort to turn the plane. Autopilot or not, the change in speed led to me throwing my mouse around, pawing at my mousepad like an angry cat.

Switching to a gamepad opened the game up a bit. Advanced maneuvers like rolls and dives were easier overall, but the precision aiming granted by the autopilot was gone. Even with World of Warplanes' simplified controls, players who actually know how to fly a plane and have joysticks will always have the upper hand. Those stuck with a mouse and keyboard or gamepad will quickly be torn from the sky.

Shooting planes down should be World of Warplanes' most rewarding achievement, but the pyrotechnics on display left me cold with its somewhat dated presentation. It scales incredibly well at least, which makes sense for a free-to-play game attempting to appeal to as many players as possible. And it's hard to argue against the accuracy of the individual aircraft models. Purchasable skins are delightfully detailed, and little touches like insignias and kill markings are all over. I actually gasped when an engine upgrade changed the entire shape of my aircraft. I felt as if I hadn't just bought a stat upgrade, but a real physical thing.

But all this attention to form comes amidst a deficit of function. Planes feel more like miniatures being pushed through the sky than weapons of war, and World of Warplanes' lazy camera robs dramatic dogfights of much of their gut-wrenching inertia. Likewise the damage modeling feels like more of a numbers game than a realistic interpretation of wood, metal and meat giving way. 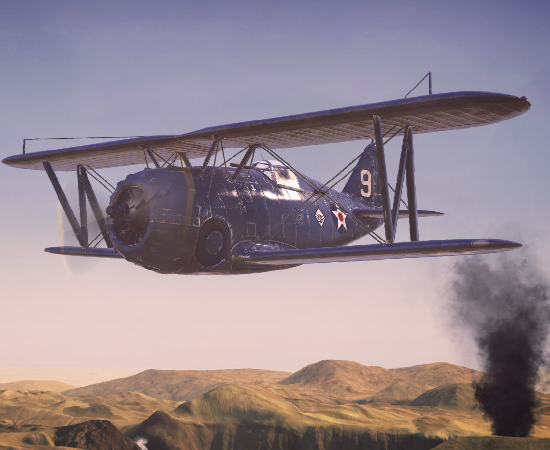 The stigma of free-to-play

The idea of free-to-play games still sets off alarms for many gamers. Wargaming's own marquee franchise World of Tanks was derided for years as "pay-to-win."

Last summer Wargaming changed its company philosophy towards what it calls a "free-to-win" model. They claim that the only items being offered for real world money now, across all their properties, are cosmetic items like skins or buffs to increase the rate of experience gain.

World of Warplanes was built and launched well after that change in philosophy, and for whatever other problems it has, it lives up to that promise. It didn't matter how much money I put into the product. I feel like I had a whole experience after giving Wargaming nothing more than my time.

Many of these structural issues could have been ignored if the game could only present something more interesting to do with it all. World of Warplanes only offers a Standard Battle mode, where a motley collection of planes from all over the world repeatedly throw themselves into cluttered airspace over anonymous patches of land, only to catch fire and crash like lawn darts in a hillside.

There's no conflict on the map below. Few of the various ground objectives are important enough to turn the tide of battle. It's kill or be killed. Over and over again. All in pursuit of experience to unlock a slightly better airframe, refill on incrementally better ammunition or sock away for the next plane in the tech tree.

World of Warplanes needs some tune-ups before it can soar

More of those aircraft are being added to World of Warplanes all the time. It's a collector's dream. But more than anything, it needs a better camera, and better, more accessible controls â especially for gamepads. Without fixes and more diverse gameplay, my squadron is grounded until further notice.

World of Warplanes was reviewed using a new account started by the reviewer as well as a press account with some unlocks provided by Wargaming. You can read more about Polygon's ethics policy here.