Dadliest Catch is best at finding madness in the mundane

Octodad: Dadliest Catch is obviously very silly, you don't have to get past the title to realize that.

But it's also sort of brave. Granting semi-control of a wildly gesticulating octopus may make for an amusing demo, a quick laugh, but who would think to take the joke even further and build an actual game around it?

Octodad: Dadliest Catch is so gutsy, so endearingly stupid, it's almost painful to critique it as I would any other game. "Yeah, I know this bit doesn't work," the part of my heart undeadened by years of game criticism protests, "but may I remind you you're controlling a goddamned octopus?"

Octodad. More than just a cute nod to 2009's hyper-pregnant mom célèbre, it's also perfectly descriptive. Our hero is an octopus who also happens to be the father of two children. Don't try to puzzle out the mechanics of their conception and gestation, believe me, no good comes of it.

The ... let's say, awkwardness of Octodad's situation is represented well by Dadliest Catch's bizarre controls, which map one of his leg tentacles to each trigger and one of his arm tentacles to the thumbsticks (when they aren't controlling leg direction, that is). Octodad's head and mantle are sort of amiably dragged along for the ride.

Much of the joy and hilarity of Octodad is derived from just how ineffective a control scheme this is. Watching Octodad attempt to pour milk for his daughter as he simultaneously flips a living room table, pulls a painting from a wall and accidentally chucks the carton at his son is endlessly entertaining.

If through sheer will and inspiring determination you manage to become competent at steering the game's hero, you can ramp up the madness by activating co-op mode. With each player controlling individual limbs, you'll be lucky if you can manage any ambulation for Octodad that doesn't resemble a grand mal seizure. 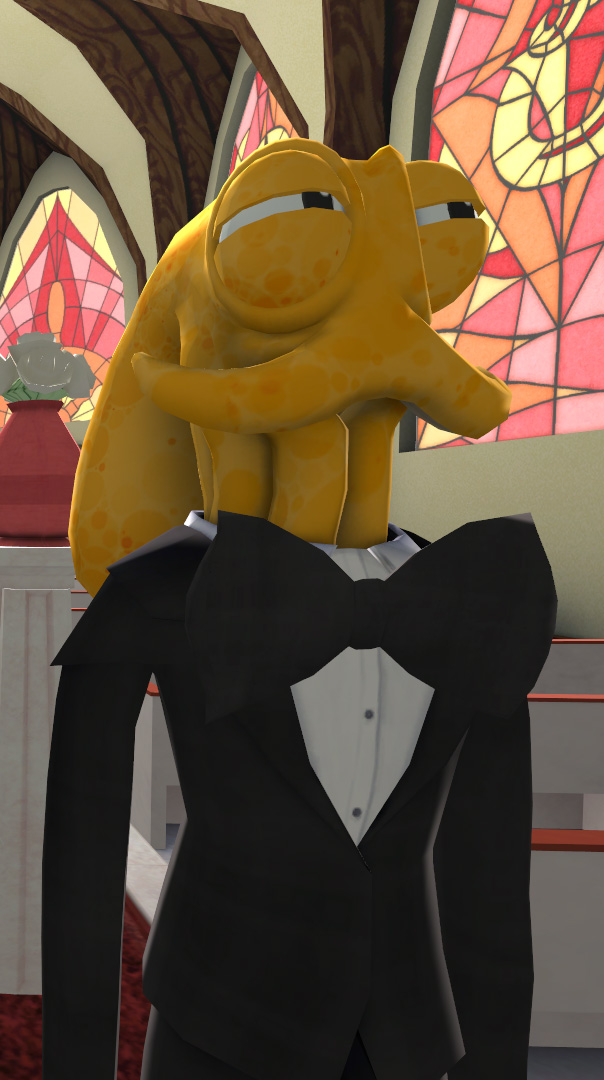 THE MUNDANE MADE IMPOSSIBLE

In most games, I perform amazing feats I'd never dream of in real life. Leap over the chasm, pilot the spaceship through the enemy armada. But in Octodad, I was was thwarted by making coffee, something that, I assure you, I've performed with little to no drama in my real life countless times.

It's almost certainly unintentional, but Octodad's struggles serve as an effective metaphor for those living with disabilities and the everyday challenges they face. Young Horses doesn't seem to be making any political statements about people with disabilities or how the world reacts to them, but Octodad does provide an effective (though extremely silly) window into what it's like living in a world not built for you.

It's all pretty absurd, but Octodad: Dadliest Catch is smartly grounded by a world that's otherwise perfectly ordinary. Perhaps it's their own self-delusion or his particularly convincing suit, but our hero's family flatly refuses to acknowledge that the paternal head of their familial unit has eight legs, communicates exclusively in gurgles and is the exact shade of an over ripe lemon.

Octodad's endearingly oblivious family members toss out mundane chores like they're the the easiest thing in the world to do. Grill the burgers, sweetheart? Sure, let me just unwrap my left leg from this table and ... oops, OK, the burger's in the yard. I'll get that, no problem.

Sadly, when our hero moves away from the mundane into well-trod video game territory is when the wheels start to come off. As marvelous as this locomotive farce is, it's not enough to carry a full game, even one with Dadliest Catch's two-hour running time.

Dadliest Catch introduces an antagonist in the form of a chef obsessed with unsuiting our hero and revealing his aquatic identity. Octodad will occasionally stand his ground and clumsily fend off his attacker, but more often simply run for his life. Eventually, more enemies are introduced and bring with them — *shudder* — stealth sequences. 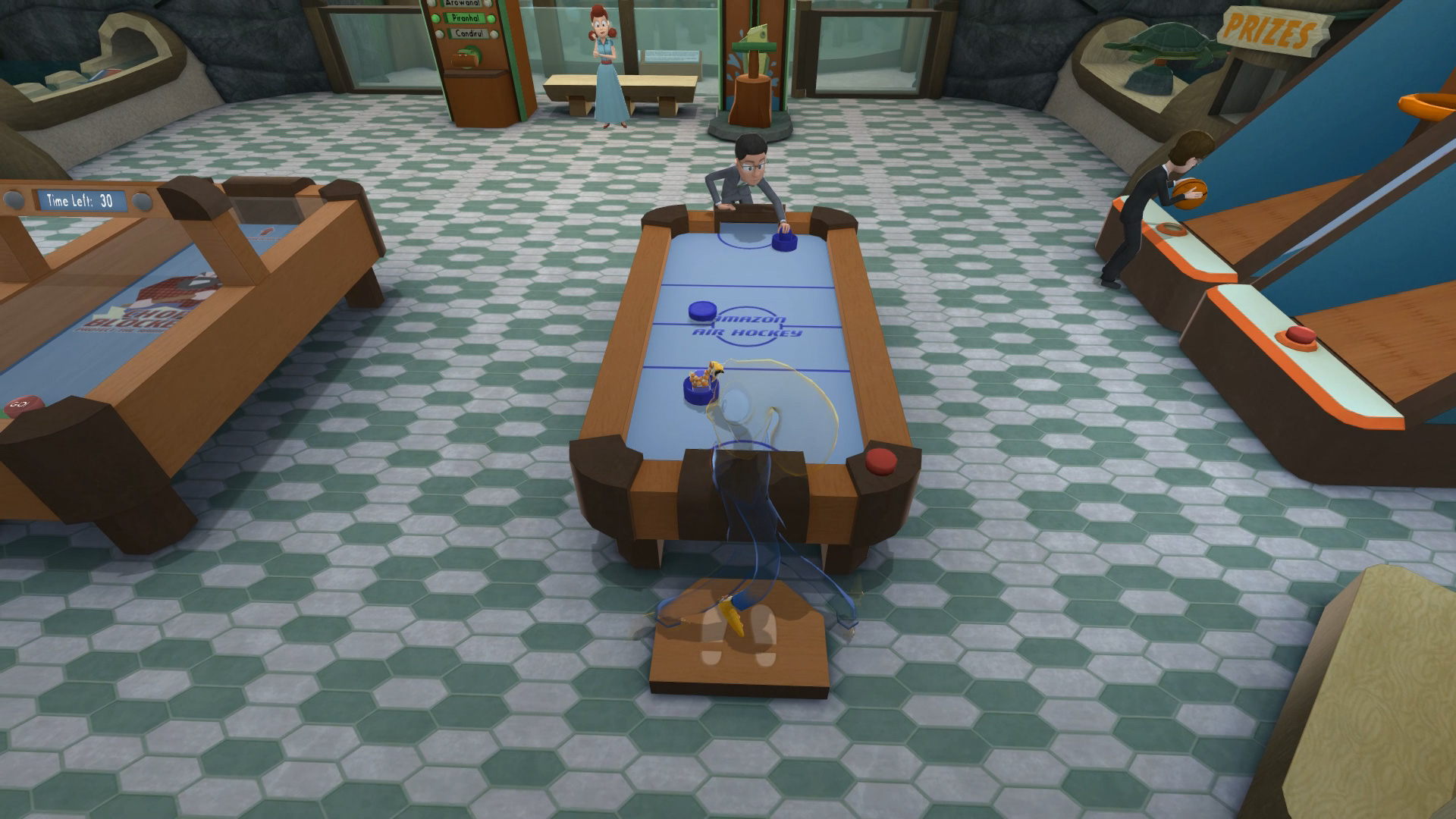 After finishing the game with the controller, I went back and gave the keyboard and mouse controls a shot. Using the mouse wheel to control the height of Octodad's arms gave a little additional fidelity, but that doesn't do much to make navigating our hero's life easier. That's not a complaint, of course; having perfect control of Octodad would defeat the whole point.

No matter what control scheme you choose, rest assured that they're both equally, hilariously baffling.

These tried-and-true tropes may work in other games, but those games don't put you in the suit of an octopus who can barely walk across a room without having to file an insurance claim.

Dadliest Catch is best at finding madness in the mundane

When the bizarre controls make mundane tasks impossible, Dadliest Catch is just too funny to be frustrating. When it piles on the weight of traditional video game challenges, controlling the tendrils of an uncooperative marionette becomes instantly less appealing.

So, does this brash, patently insane concept work as a fully-fledged game? Not perfectly, no. But it's also so funny and weird that you ignore it at your own peril. Much like its cephalopod protagonist, it's a wonder the thing moves at all.