The Castle Doctrine is something different.

Some games are fun from start to finish. There are games that exist only to spread joy, with each new challenge serving to heighten your sense of accomplishment. Then there are games that are nothing but challenge, with the joy emerging subtly, from the feeling that you've stretched your abilities, mastered difficult concepts or simply survived.

Created entirely by developer Jason Rohrer, The Castle Doctrine is neither of those games. It's something worse. Something that tests the definitions of the word "game" and that may leave you wondering why the hell you've even bothered to pick it up, what of value you might possibly take from the experience, and why — in spite of how terribly sad playing it makes you feel about yourself, whoever made it and those who against all odds might actually enjoy it — you can't quite seem to stop thinking about it.

"You must spend your money to protect your money."

At the very beginning of the game, The Castle Doctrine gives you a vault full of money. Normally, in any other game, this would be a fantastic thing, but from the outset it's clear that this vault is an anchor.

You must spend the money in your vault in order to protect your vault. You must build walls around it, surround it with traps or dogs and do whatever you can to ensure that no one but you can reach it. You have a modest selection of tools at your disposal with which to do this. These things cost money, and so we immediately come to Lesson 1 of what seems to be The Castle Doctrine's message: You must spend your money to protect your money. It is as simplistic as it is heavy-handed. And there is very little else beyond that reckoning.

Once you've created a satisfactory level of security around your vault, you may head out into the world and try to gather more money by ... stealing it from other people's vaults. Or else wait around for someone to come and try and steal yours. And that, my friends, is the game. The Castle Doctrine asks you to prepare for home invasion and then gives you nothing more to do than justify that paranoia.

"The Castle Doctrine asks you to prepare for home invasion and then gives you nothing more to do than justify that paranoia."

In The Castle Doctrine, there's no possibility for positive activity. Your money is earned through theft or as a bounty for the death of a would-be thief in your home. Thievery or murder, in essence. There are no good guys here, and there is no redemption. And even though the game promises the opportunity to create ingenious puzzles or test your mettle against puzzles created by others, there's no joy in any of it.

Should you choose to leave your home to give someone a shot at cracking it, you must reckon with the notion that while inside, they may do what they will. Such as murder your family. Oh yes, you have a family. And they must be allowed access to the exit, so you can't barricade or otherwise protect them. You may only protect your money, see. Your loved ones are expendable. (That's Lesson 2.) The best you can do is give your wife a gun and hope whoever chooses to invade doesn't also have one.

It's clear there are statements being made here, and they're not altogether outrageous ones, but they're also not too terribly deep. Even as a statement game, the experience falls flat. What additional depth or revelation might have been derived is short-circuited by the failings of the game itself — this poor online game that seemingly just wanted to be a fun, puzzle-y time is suffocating under the weight of its erstwhile agenda.

"Error means permanent death and forfeiture of all of your worldly belongings."

What's perhaps the worst crime of all in this is that the quality of your experience will be determined entirely at random. Houses you may attempt to rob are created by other players online, although you will never interact with them or know their real names. The houses are presented in a list. You're told a fictional, three-name pseudonym for who lives in the house. Serial killer style. We are all murderers, you see? And you're told how many dollars are contained therein, the number of times someone has tried to rob the place and the number of times people have died trying.

What you will find inside the house depends entirely on who has created it. It may be a fiendish puzzle with seemingly no solution. It may be a room full of pit bulls. It may be a series of traps, surmountable in only one specific order which you will only learn through trial and error. But be warned: Error means permanent death and forfeiture of all of your worldly belongings. You must start over, try again. Ad infinitum. Stepping through the door of a house was rolling the dice that I would find fun or frustration. And the house, in this game, usually won.

When I chose to not rob I instead stared at a menu screen while waiting for someone, anyone, to invade my home so that I might hopefully murder them with my own traps and collect a bounty. For that is the sole other method for obtaining additional funds: murder, albeit ostensibly in self defense.

Late one evening, tired of attempting burglary after spending most of my funds on home protection, I decided to try a round of just being a burglar. I threw all of my funds into burglary tools, then left my family to their own devices. I managed to crack a house for a small sum, which turned out to be not quite enough to cover the cost of the tools I was forced to leave behind, then returned to find my house robbed, my wife murdered. 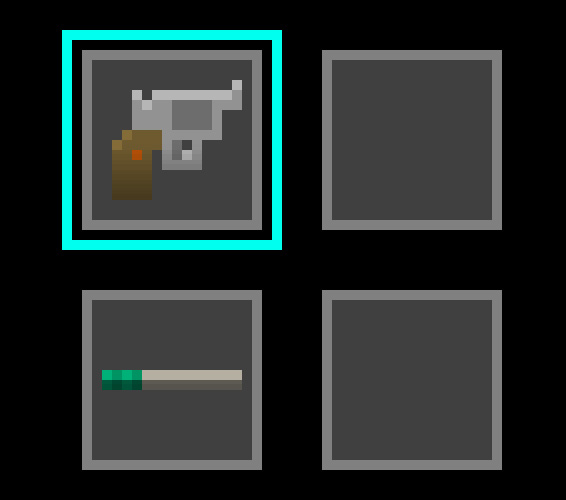 While I was gone, someone had invaded my home to rob me of the hundred or so dollars left in my vault and in the process chose to bash my wife over the head with a pipe just because she was there (eds. note: In the Castle Doctrine, your wife holds half of your bankroll, providing incentive for killing her. We regret the omission).

I was able to watch the assault after the fact via security tape. As my wife fell to the floor, her head fountained blood in an animated spray of crimson. The animation was, to my eye, the single brightest spot of color in the entire game. One must assume this is not by accident.

Ultimately The Castle Doctrine is a video game that seems to value its message above your time. Setting aside the moral implications of its message, it requires from those who might play it the will to subject themselves to incessant frustration and failure in order to squeeze whatever satisfaction might come from its fleeting rewards. And all of its rewards come by extension of simulated mayhem, directed expressly at actual, living players. Setting off on the steep learning curve to somehow get good enough to approach fun with the experience is such a miserable slog, the actual rewards themselves fail to compensate. Or at least they did for me, but then again, I don't hate all of humanity. Your mileage, as they say, may vary. 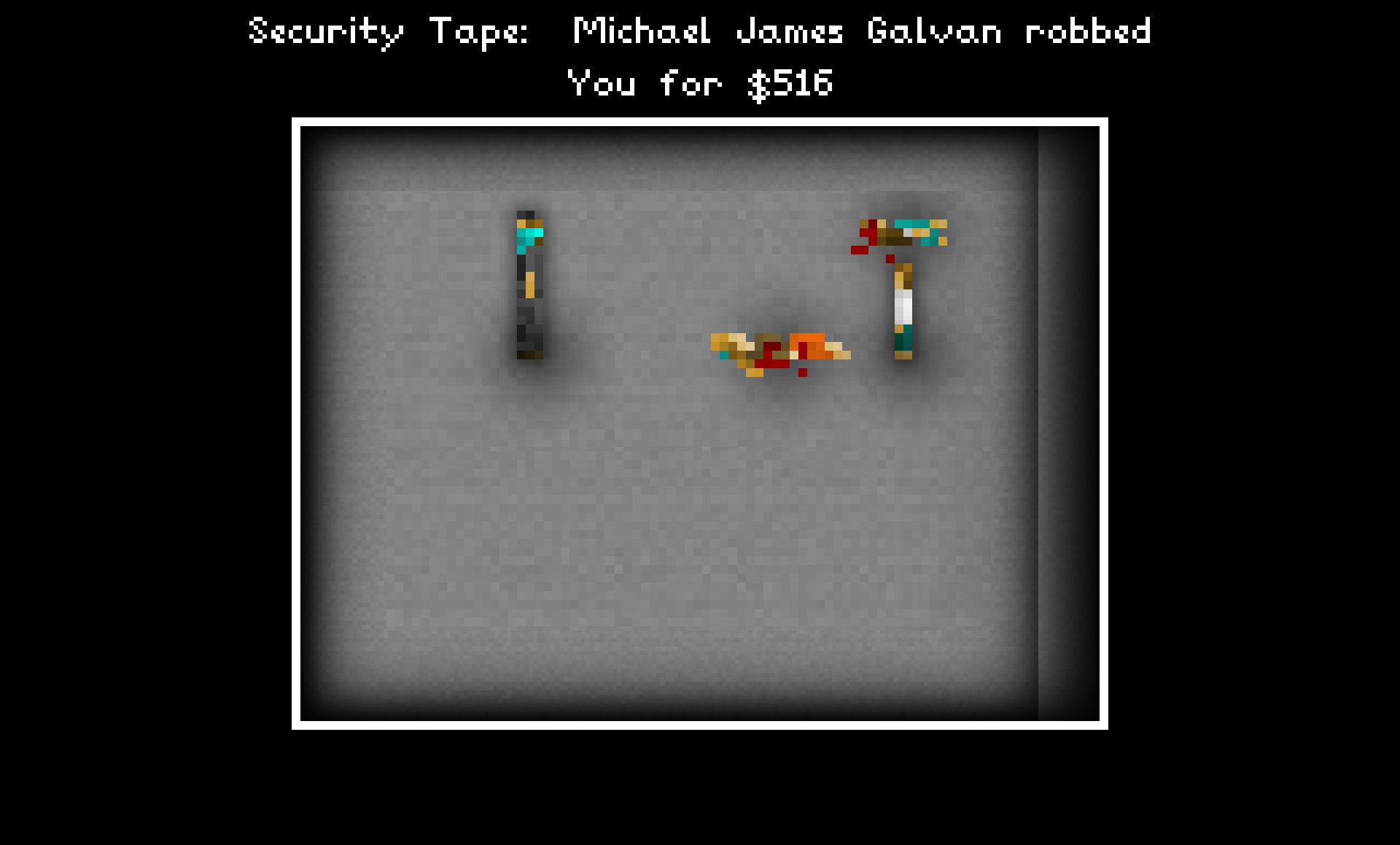 As for the statement The Castle Doctrine appears poised to make: It's hard to take seriously. Your house exists to be robbed, your family serves no purpose but to be murdered and you are nothing but a pawn in what feels like a childish attempt to make all this death and mayhem mean something. The most fun I had while playing The Castle Doctrine was when I decided to stop. And that brings me back to the only real choice offered in this experience.

Tired of getting nowhere as a petty thief, I decided to try my hand as a dedicated home owner. I spent all but a few hundred of my gift dollars building an elaborate and misleading series of traps to guard what little remained in my vault, and then I left my house and waited.

Returning after an overnight away, I reviewed my security tapes with apprehension, but also a little glee. Because for all that's abhorrent about The Castle Doctrine, it does rightly engender a strange sense of fascination. Watching as criminal after criminal broke themselves against my defenses, I felt something like a thrill awake inside of me. With each successive corpse, my bank account grew. I was more successful as a passive murderer than I ever could be as an active thief. And the larger my bank account grew, the more thieves I attracted.

"Watching as criminal after criminal broke themselves against my defenses, I felt something like a thrill awake inside of me."

And this, ultimately, is The Castle Doctrine's Lesson number 3: That merely by gaining wealth, you, too, are responsible for the actions of those who wish to take it from you. By building defenses, you bear responsibility for the well being of those who would attempt to penetrate them. That you cannot remain apart in a world designed with nothing better for you to do than be evil. We are all, us murderers, in this together.

It ended as it had to, this, my final attempt to play The Castle Doctrine. After foiling over a dozen attacks and collecting hundreds in ransom, there came the final invader. We'll call him John Wayne Harvey, but that wasn't his name. John Wayne Harvey was an experienced thief, who came prepared with just the right number of just the right kind of tools. One imagines he had been in my home before. Perhaps he was foiled in his previous attempts to rob me. Perhaps he came back this time for revenge.

John Wayne Harvey defused my traps with a minimum of fuss and then, out of spite, tracked down and murdered my wife and daughter, leaving my little boy child alone to stare in horror at the corpses. John Wayne Harvey then cooly returned to my vault and robbed me, leaving me with nothing.

My only recourse, should I choose to continue playing The Castle Doctrine, would be to start over. Suicide, in the game's terms. A robbery gone wrong, and the man of the house takes his own life. Ripped from the headlines for your amusement. There's a button to facilitate your suicide. It is clearly marked.

The Castle Doctrine was reviewed using a copy purchased on Steam. You can find additional information about Polygon's ethics policy here.