Tomb Raider: Definitive Edition for PlayStation 4 and Xbox One breathes a liveliness not seen in the current-gen version of the game into the world of Lara Croft, according to the game's executive producer Scot Amos.

Speaking to Polygon, Amos said development on the PS4 and Xbox One port of Tomb Raider began as developer Crystal Dynamics was wrapping up the franchise reboot for PlayStation 3 and Xbox 360. Knowing that next-gen consoles were on the way, the studio — which teamed up with United Front Games and Nixxes Software to create the ports — wanted to take advantage of the improved technology to create what Amos describes as the development team's original vision of the game, one they could not achieve because of the horsepower restrictions of existing consoles.

"It adds this incredible fidelity that we weren't able to do before."

"Looking at the world, we always wanted the island to feel like a character," Amos said. "With the power of next-gen consoles, we've been able to make upgrades to visual and environmental storytelling. Lara now has this real-life wow factor. We've remapped her whole face, her textures have changed and they now react to what happens to her — when she gets wet, when she gets muddied, when she's covered in blood..."

In a demo of the next-gen port of the game, Amos showed how the new technology allowed the developers to add movement and density to the world and to Lara. The environments have more vegetation, with more trees, thicker bushes and wildlife that responds to their surroundings. When the lightning flashes, all the individual raindrops falling from the sky are illuminated. In a burning building, thick clouds of smoke move dynamically, creating a sense of claustrophobia. The world reacts to wind, the mist in the distance moves, bushes and twigs bend and swing back as Lara walks through them, and even the items Lara carries are now affected by physics. Her climbing axe swings from her hip as she walks. Her strands of hair move as she does and her necklace jingles as she runs, jumps, swings and falls.

"It sounds small, but we see it as a package," Amos said. "It adds this incredible fidelity that we weren't able to do before." 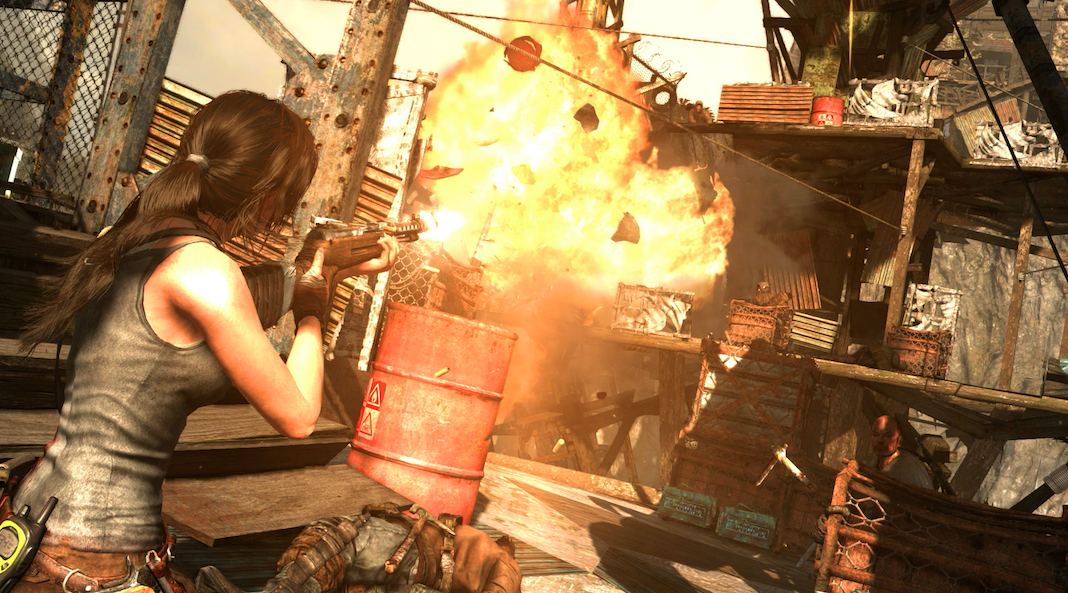 In some areas, these visual enhancements also contribute to the way the Tomb Raider's story is told. According to Amos, the details the development team added give players a sense of what happened on the island before Lara arrived. As she wanders through camps, there's more debris, more trash and more bodies. "All these details start to flesh out the story from a game world that was cool-looking to this real place that has been lived in," Amos said. "We can enhance that storytelling and make you feel like you're in the middle of it."

"[The game] is prettier in a lot of ways, but it was already beautiful to begin with. By upgrading it to this version where the lighting is dynamic and the particles are dynamic, it doesn't feel like it's a game world. It feels like it's a real world."