Razer has a history of bringing wild-eyed concepts to CES, only to brand them and release them the following year. In 2010, it announced a motion controller in partnership with Sixense; in 2011, it brought the newly named Razer Hydra to the show. The next year it announced Project Fiona, a rather awkward tablet married to physical controls bolted to the sides; the following year it reintroduced us to the Razer Edge, Fiona's new, consumer-ready name.

This year, Razer is back with an unusual piece of hardware revealed under a codename. Project Christine is "the world's most modular gaming PC design," Razer CEO Min-Liang Tan told Polygon at CES today in Las Vegas. What that means is that each component of the computer is enclosed in a mineral-oil cooled chamber, and can be installed easily in the system's PCI Express-powered "backbone." Everything from CPU to GPU, memory to storage can be slotted into the system. But this is just a concept; Razer wants to know if this is something PC game players want.

"We won the best of CES two years ago with Project Fiona, and we went onto actually build the concept design into an actual product a year later and that was last year," Tan said. "So this year we're here to show off Project Christine, to get the feedback of gamers out there, and if it's something they want we'll actually build it."

Not all of Razer's concepts make it to market. At CES in 2011, the company shared its vision of a small, portable gaming PC called the Switchblade. While the unusual device was never released, its unique LCD-driven keyboard made its way to the company's DeathStalker keyboard the following year and Razer later released a thin, more traditional gaming laptop called, simply, the Blade.

For Tan, Project Christina is a computer for the discerning consumer who demands the very best but hasn't been interested in the process of building one. That extends to the system's upgradability; while the modular format of Christina makes upgrades easy, it also limits the availability of components to those designed to fit Razer's unusual format.

"We've actually got to build everything from the ground up. So it's not going to be possible for you to rip it open and install it into another PC," Tan said. "However, what we want to do is open this up as a reference design for all other brands to build."

Part of this early reveal is surely related to testing the waters for manufacturer support for the system. But Razer has other ideas to mitigate the fear of being locked into a proprietary ecosystem controlled by Razer: a subscription model.

Even if you're a subscriber, there's still the up-front cost to worry about. While Tan wouldn't say how much the system on display would cost or what their price targets were, he did say that some of that price is user dependent, like most PC gaming options.

"This is a tri-SLI [GPU configuration]," Tan said. "It has a top spec CPU running on this. This is all running off mineral oil cooling. I don't have a price point, it really depends on the user. You don't need to have this fancy control panel, it could just be a power button." 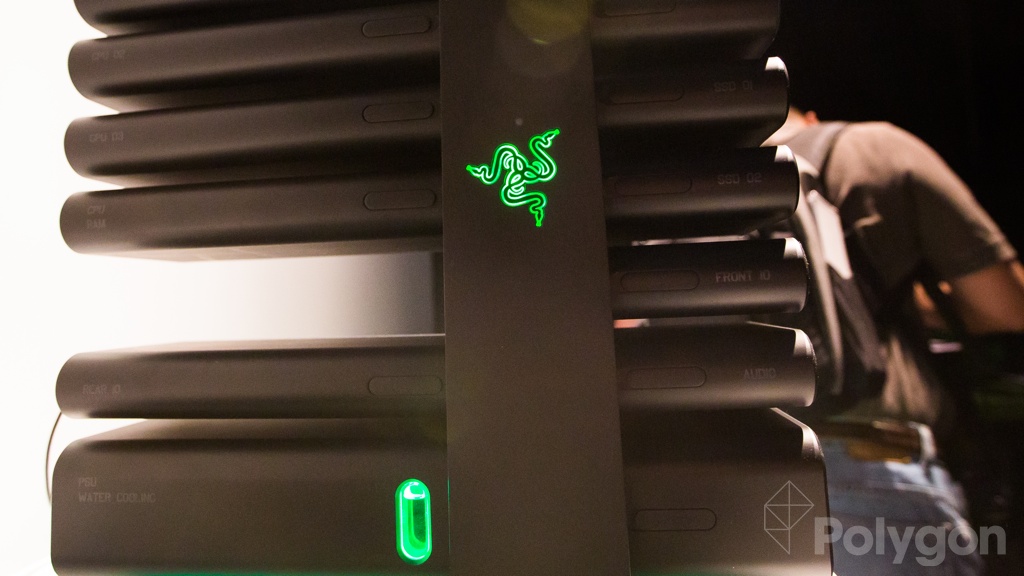 With all the buzz around Valve's Steam Machine initiative, we asked Tan why Razer was absent from Valve's list of hardware partners shared last night. With a focus on simplicity and the ability to create and sell attractive gaming systems like the Blade, the living room seems like a natural goal for Razer.

"Steam Machines are definitely something that we're really passionate about," Tan said. "And good things take a little bit of time. We don't like to be rushed to anything."

And for the same reason we're not seeing a Razer-designed Steam Machine, Tan isn't interested in being pinned down on the future availability of Project Christine. "We like to constantly iterate at our own pace and we think it's the entire experience that's really important."

One year from now at CES 2015, we could be seeing a consumer ready interpretation of Razer's boutique (and presumably expensive) modular PC experiment. Or perhaps we'll see these ideas recycled into new products, reformed into something more pragmatic, more market friendly.

"It'll be ready when it's ready, that's our mantra," Tan said.