When we saw an early prototype of the Oculus Rift at CES last year, simply peeking into its virtual world — at the time, a confined, cold, rusted out spaceship — was an astounding experience. But the Rift had its share of quirks, including its chunky "screen door effect" and blurry visuals, particularly when sweeping your head around.

The latest version of the Oculus Rift, a high-definition prototype with a new screen and all-new head tracking features, once again manages to astound. It does away with many of those shortcomings, making the wait for a commercial version of the VR headset even more agonizing.

Those revisions also go a long way to reducing "simulator sickness," said Nate Mitchell, vice president of product at Oculus, an aspect of virtual reality the company has been working to eliminate.

As we reported earlier today, the Oculus Rift "Crystal Cove" prototype adds two new welcome features: positional tracking and low persistence. Oculus Rift users can now lean in for a closer look at an in-game object or panel, or peek around a wall by moving their head and upper body, and seeing their physical actions translated into the virtual world. And thanks to a new OLED panel with a high refresh rate, images appear less blurry and with less judder when quickly looking around.

Oculus demonstrated positional tracking, which is powered by a camera and an array of LEDs on the face of the new Rift prototype, in an Unreal Engine 4-powered demo based on the engine's "Elemental" showcase. We looked out upon a board game-like level that played like a simple tower defense game, with the fiery demon from the "Elemental" demo opposing us in the distance. The slower-paced demo was an opportunity for us to lean in, look around and look over elements in the game world.

It was immediately impressive and wholly immersive. When I leaned in for the first time, eyeballing a dwarf as he marched through a fireball-spewing level, I was briefly concerned my torso would bump into the stony edge of the game world. The added positional tracking gives an incredible sense of being in that space, and there was a magical moment when I leaned in and craned my neck to watch a fireball arc into a crevice, watching the flame light up its walls. 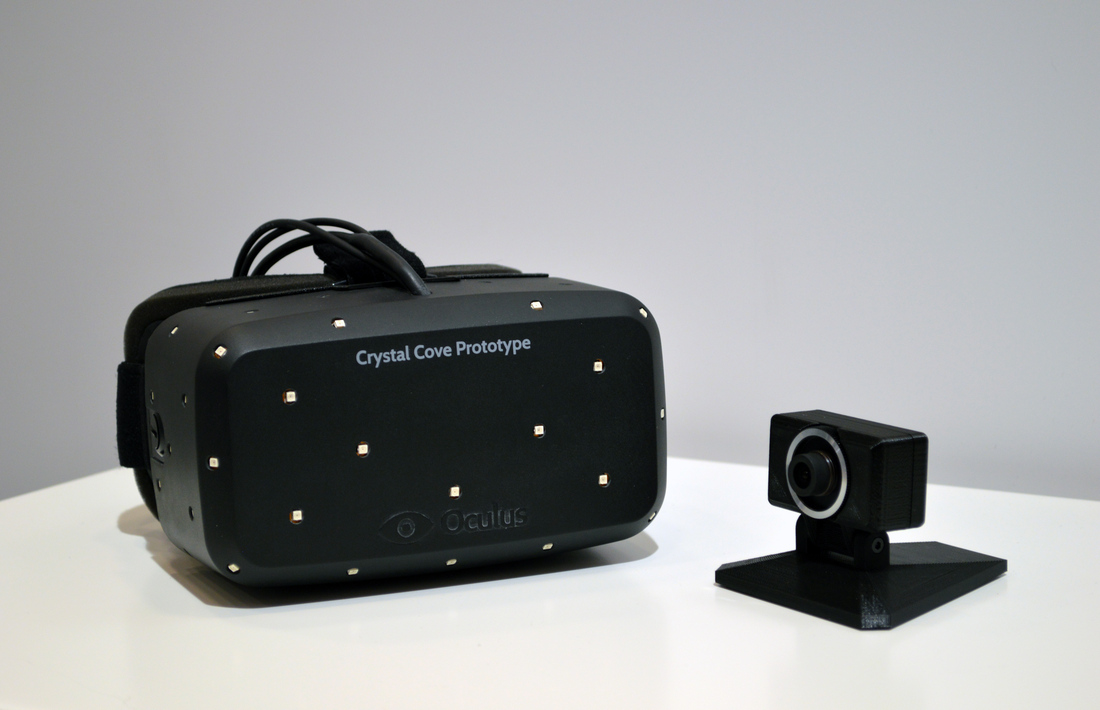 The positional tracking in the "Crystal Cove" prototype is powerful. Thanks to the LEDs that wrap around the Rift's visor, you have to twist your head into unnatural positions for it to lose sight of you. In the UE4 demo, when the Rift did lose track of your head position, the screen desaturated as a sort of "out of bounds" warning. It recovered from that loss of position tracking quickly.

Positional tracking also came into play during a separate demo set in CCP Games' space dogfighting game, Eve Valkyrie. While sitting in the cockpit before take-off, I leaned in deep for a closer view at the spaceship's HUD, getting a clearer view of its holographic information panels.

The Eve Valkyrie demo was more focused on showing how low persistence improves the Oculus Rift experience. Sweeping one's head back and forth while watching those high contrast HUD panels were no longer blurry, no longer a messy light smear across the screen. It's likely going to be a huge asset for fast-paced, action-oriented multiplayer games, like the incredible Eve Valkyrie demo.

Oculus' new innovations — which will be included in the final version — move the VR headset closer to its commercial release, but the company still isn't committing to a firm date. It's a big step forward, and given that Oculus says it still has more refinements and announcements in the works, bodes well for the Rift's long-awaited final version.