How the 101st Airborne trains in virtual reality

My co-pilot and I are standing on a narrow, wooded road next to our helicopter. Or, I should say, what used to be our helicopter. The smoking wreck is now half buried in the dirt.

I’d like to think that I did a heroic job crash-landing it, but I don’t even know how we got here. What I do know is that we have to leave, and fast. The insurgents that brought us down are on their way to find us.

We look each other over for wounds, flex our legs, and then take off running north.

In the real world, I’m on the grounds of Fort Campbell, Kentucky. This is the home of the U.S. Army’s premier airborne infantry division, the 101st, an organization steeped in history.

But I’m not actually out on their "back 40" where they practice maneuvers, or even in their plywood mock-up of an arid village. I’m standing on a three-foot wide circular pad inside what looks like a converted datacenter. My body is covered with sensors.

I’m strapped into the U.S. Army’s most immersive infantry combat simulator, the Dismounted Soldier Training System. This is the virtual reality trainer that keeps the 101st at the top of their game.

The DSTS, manufactured and maintained by Intelligent Decisions, has many parts. Like most military things, they’re a mish-mash of acronyms. But some components of the system are easy to understand.

One server controls everything from the time of day to what direction the enemy comes from. There’s another server that records everything that goes on in a session — every word spoken and every round fired. There’s even a handful of desktop computers where you can sit down and participate much as you would with a civilian PC.

But what makes the DSTS different are the eight wearable VR systems, a custom-built set of replica weapons and armor networked together. Standing on their own, they look like something from the arming chamber of a Space Marine.

From one perspective, this seems like overkill. Just hand out some gamepads and get to work. Despite what you might think, not every soldier these days is a veteran of first-person shooter video games. After months spent in boot camp, after years spent on active duty, the one controller that every soldier knows how to use best is their own body. The DSTS is designed to allow them to make the most of their innate reflexes, and the sensory experience aims to make soldiers feel like they’re on the battlefield carrying the equipment they’re already trained to use.

Suiting up and getting calibrated is a non-trivial process.

Strapped to my head is a standard issue U.S. Army combat helmet. Bolted to the front, where night vision goggles might normally live, is something called a Head Mounted Display, or HMD.

There are cables running from the HMD that are tied down near the back of my head, routed to the nearly 30 pound computer strapped to my back. It’s heavier than it needs to be because it’s designed in part to simulate the load of ammunition and protective armor that a soldier carries into battle.

The image that computer projects in front of my eyes looks like Arma 2, the seven year-old commercially available video game. That’s because it essentially is Arma 2, or the licensed military-grade version of it called Virtual Battle Space.

Suiting up is a non-trivial process.

I’ve never played Arma 2 on the Oculus Rift, but the view through the HMD still looks a bit behind the times. The field of view is narrower than I would like, and even moving the diopter adjustment as far as it will go, the edges of the screen are still out of focus. Making matters worse, the framerate isn’t quite as high as I’d like it to be. It’s somewhere around 30 frames per second and has an irregular flicker to it, but once I have it in the right position it gets the job done.

One thing about the HMD though; it’s built like a tank. I imagine I could throw it across the room and, after I dug it out of the drywall, it would still work fine. It’s deceptively heavy, and when it hits the bridge of my nose it hurts.

The experience isn’t limited to the HMD. There’s an excellent pair of military grade, noise canceling Bose headphones. With their retention strap in place the HMD doesn’t bounce so violently, and they block out every other sound in the room. Once they’re on all I can hear is the leaves rustling — and my Blackhawk burning gently.

In my hands is a replica M-4 rifle, with fully working controls, including a fire selector and a charging handle. To reload I have to physically drop the magazine and insert a fresh one. It’s completely wireless, connecting to my backpack via Bluetooth. A motion sensor cleverly hidden inside the gun tracks its movement in space, while an electro-magnetic compass inside my helmet tracks the orientation of my head.

After a brief calibration, turning my head left or right turns my avatar’s head the same way. That means I can point my gun in one direction while looking in another, something impossible to do in a modern video game.

This doesn’t feel like a video game. It feels much, much more real. 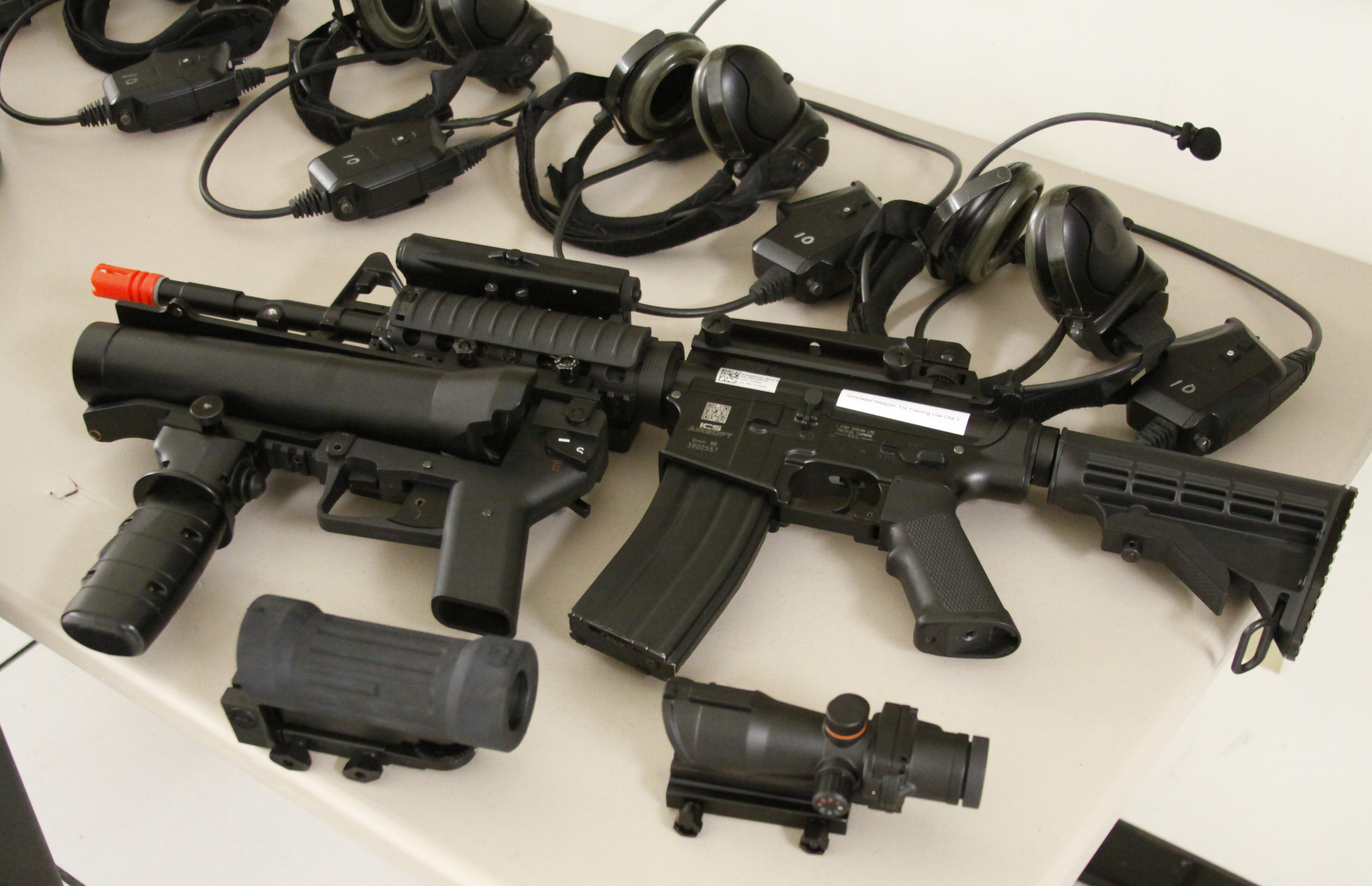 But the rifle isn’t the only input at my disposal. Attached to each of my hands is an NFC reader. Clipped to my chest are a number of NFC tags, one for each of several color smoke grenades as well as a single M67 fragmentation grenade. Touching my hand to my chest instantly places one in my hand. There’s a pair of sensors attached to my upper arms, and by swinging my arms I can throw grenades.

Behind the foregrip on the rifle is a tiny, rugged joystick I can operate with my thumb. Up moves me forward, back reverses and left and right allow me to strafe. By holding my weapon below a 45 degree angle I can switch from a walk to a run.

The pair of sensors attached to my thighs lets me kneel each leg independently. I can even lay down on the floor to make my avatar go prone. The way my virtual body reacts inside the simulation is nearly flawless.

This doesn’t feel like a video game. It feels much, much more real.

For the next 20 minutes I’m fighting for my life, moving from cover to cover, leaning around trees and buildings, scanning the bushes for enemies. I empty three magazines, kill two and die four times.

By the end of it I’m a sweaty mess, but I can’t wait to do it again.

One of the DSTS administrators, Kenneth Hedgespeth, explained that there are only 32 of these systems in the world right now. This one cost the Army $575,000, and he and fellow administrator Ed Simon run three such systems here at Fort Campbell.

After that kind of investment, it's no wonder the DSTS is designed to grow with the Army. In the future, individual soldiers will be able to log into the system with their military IDs. Their avatars will mimic their real world height, weight, speed and stamina giving them a sense of their own limitations.

Soon, he said, they’ll be upgrading them to run VBS 3.0, the military equivalent of Arma 3. 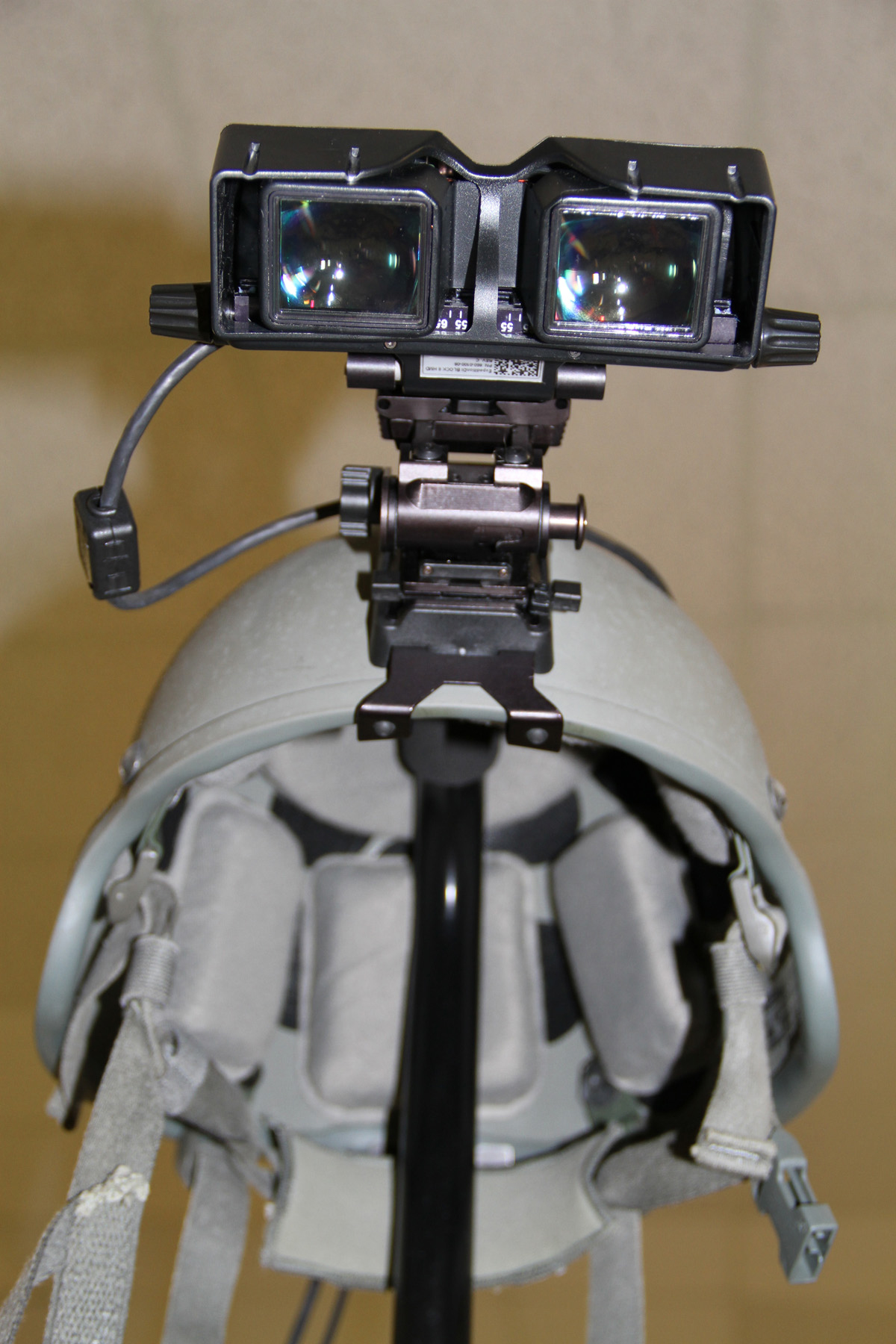 It’s an upgrade that will bring the systems up to date with the helicopter flight simulators in the next room. Hedgespeth says that will allow the pilots, inside their simulators, to fly into the simulation here in the DSTS. Then they’ll be able to load up the infantry and fly away with them — a truly integrated simulation of nearly everything that defines an airborne infantryman.

The sticking point, he says, in something called "information assurance," the military term for limiting what kind of digital information is transmitted outside this room. That concern gets to the heart of why I’m not actually allowed to join a group of active-duty soldiers inside the simulator.

U.S. Army tactics are classified. Nothing that a soldier does inside this room can ever leave it.

"Any unit that comes in here, I can play back the [video and audio of their session] back to them. But they can’t take it with them, because it’s now for official use only.

"We wouldn’t want that to get out and somebody to say, ‘Well here’s how infantry guys at the 101st do things.’"

The value of this system to the Army is that it allows military units to practice their skills for free. There’s no gas needed to drive them around, no ammunition to replenish. They just suit up in their sensors, swing down the HMD and they’re ready to fight.

For the soldiers themselves, however, there’s a more meaningful benefit. One of the most dangerous things a soldier will ever do is get into a firefight, and despite all the battle drills they might run in the real world they’ll never come under direct fire until they meet the enemy in the field.

There’s no way to train for that, unless you’re in VR.

"We absolutely cannot shoot at each other here in the real world," says Eric Lamezec, a sergeant with the 11th Combat Aviation Brigade.

"Here we can. They can even pit squad vs. squad, and do things that are really good training for us. Having enemies shooting at us and having us returning fire, cordoning an area … It’s a little awkward at first, but once you get used to it it’s fun. I love this place. I have my guys come in here once a month.

"This is the most in-depth thing that I’ve ever encountered, simulation-wise, in my Army career. It’s extremely realistic."

The DSTS is quite a workout, but the value to the individual soldier comes in training the brain rather than the body.

Josh Miller, a specialist under Sergeant Lamezec puts it plainly. "The DSTS teaches you how to make the decision to fire. It’s okay for you to mess up in here, because this is a simulator.

"If you mess up out there," Miller says, motioning towards the door, "It’s not okay. You kill someone. That’s why you come in here and practice first."