That's not a condemnation of Omega Ruby & Alpha Sapphire (ORAS), which smartly utilize the features that made X & Y such a long-overdue revitalization for the series. The interconnected world, vibrant aesthetic and unparalleled charm of last year's games have been layered onto Pokémon ORAS, giving it a look and feel that is unrecognizable when compared to the original 2003 Game Boy Advance titles Pokémon Ruby & Sapphire.

But the issues this franchise has always suffered from are hard-wired into the DNA of Ruby & Sapphire, and no amount of visual polish or social functionality can buff them out.

Pokémon ORAS could best be described as a supplemental entry in the current generation of the franchise — a generation that X & Y kicked off on 3DS last year. At the risk of putting too fine a point on it, ORAS feels less like a remake, and more like an X & Y expansion, as all of its best features were introduced in last year's game.

The Player Search System makes a triumphant return, and operates exactly as it did in X & Y. Connecting to other players for trading, battling or sharing heals or buffs through the (still unfortunately named) O-Power system is a breeze, and makes multiplayer an integral part of the experience. Super Training and Pokémon Amie are also back, giving you accessible options for boosting your team's stats and friendship levels. 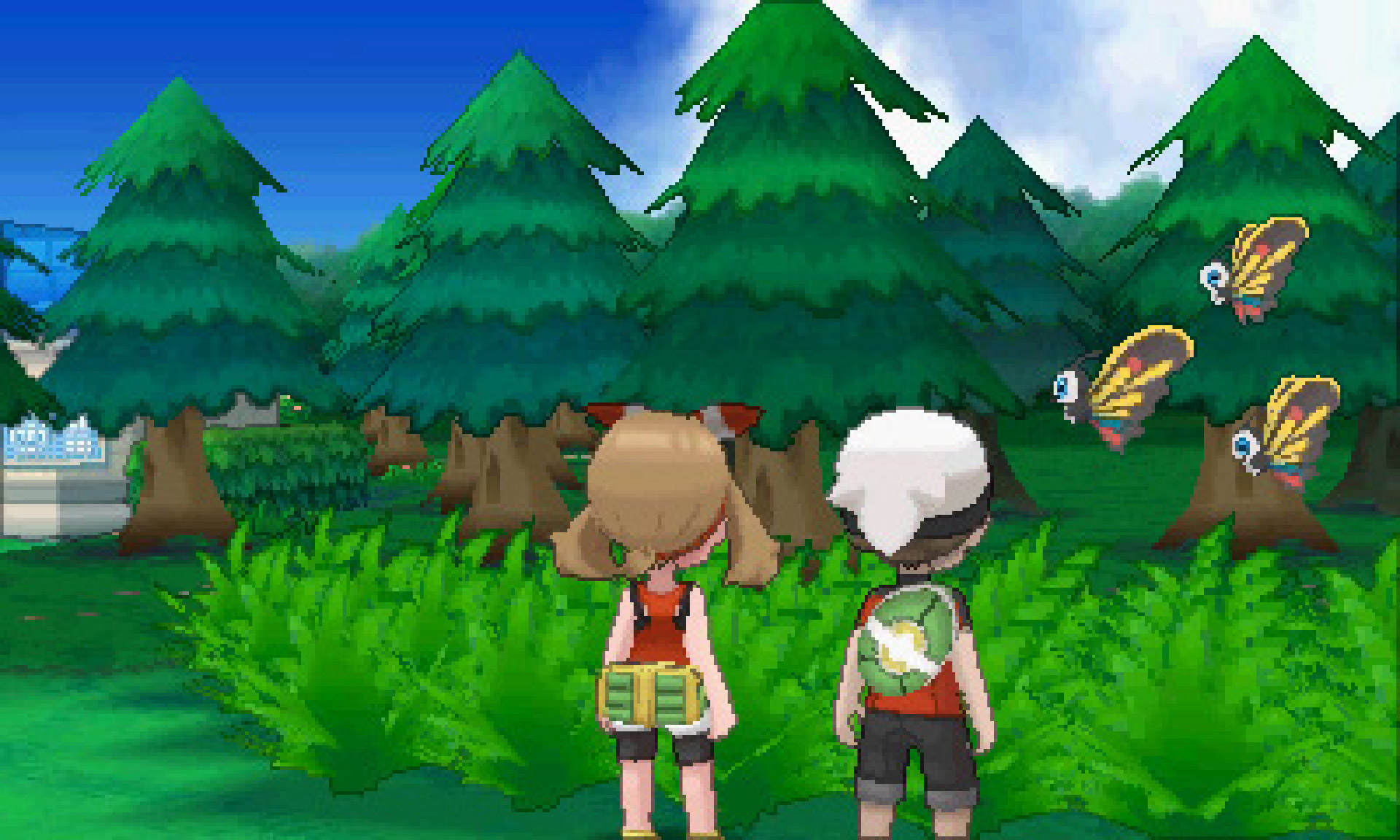 Those tools are a welcome addition to Pokémon ORAS, but their inclusion in the game's bottom-screen UI — a suite of tools called "PokéNav Plus" — is a tad clumsy. There's just a lot going on in that screen: You can use it to display a super-thorough world map (which shows where certain Pokémon, trainers, berries and more can be found), a TV station that broadcasts updates about your achievements, and the "PlayNav," which essentially contains all the bottom-screen features of X & Y.

The most useful application, and arguably Pokémon ORAS' most fascinating original feature, is the DexNav, a radar tool which helps you capture stronger, more uncommon monsters. Occasionally, in tall grass, water or other places wild Pokémon pop up, you'll see the shadow of a Pokémon appear in the overworld. If you run toward it, it will disappear; instead, you have to sneak up on the Pokémon by slightly tilting the analog stick — another new feature for the series.

Pokémon caught using that method are usually the rarest and highest level in a given area, and often feature moves that they normally wouldn't start out with. For casual players, it's a nice change of pace, adding another layer of complexity to monster-catching and locomotion. For the hardcore, it lets you capture Pokémon with rare moves that would otherwise require hours upon hours of breeding (and luck).

Pokémon ORAS also received the same drastic visual overhaul that Pokémon X & Y introduced, but with slightly more emphasis on making the world of Hoenn feel real, rather than just real pretty. Those touches are small, but appreciated: bird-type Pokemon fly overhead in certain routes, and schools of Luvdisc swarm by when you dive undersea. Most jarring is how trainers actually turn their heads to look at you when you're close — after years of seeing statuesque trainers, that effect was a bit creepy.

Pokémon ORAS' aesthetic is more vibrant and scattershot than that of X & Y, featuring brighter hues and more disparate habitats than its predecessor. The result might be less cohesive than X & Y's clever take on Poké-France, but it's classic Pokémon, taking you from lush forests to haunted houses to active volcanoes with little transition between.

In fact, there's a lot of "classic Pokémon" moments built into Pokémon ORAS, making it a far more nostalgic adventure than X & Y ever was. But in recapturing the charm of the series' earliest entries, Pokémon ORAS illustrates a thorough picture of the franchise's chronic, most infuriating problems.

Pokémon ORAS' story is —as it almost always is with this franchise — the biggest downfall. It's a threadbare plot (even for a Pokémon title) about beating gyms, learning about Mega Evolution, stopping your respective version's big bad team, facing off against an apocalyptic legendary Pokémon and conquering the Elite Four. Nothing about it, including its barely-developed characters and steady stream of MacGuffins, is exciting or memorable.

Pokémon ORAS does add a few new beats to the main plot, but they're all pretty insubstantial. There's a new mechanic called "Primal Reversion," which is basically an automatic form of Mega Evolution that's used only by ORAS's two main legendaries. There's more of an emphasis on Pokémon Contests — another returning feature — but aside from unlockable "cosplay Pikachu," you're not really incentivized to participate.

What's frustrating is that these flaws didn't need to be carried over in this remake — as evidenced by the title's post-game "Delta Episode" content, which sees you save Hoenn from an impending asteroid strike. The narrative and tension of that content fits in with the world of Ruby & Sapphire, and is way more memorable than everything that preceded it. It shows that this franchise's story telling can be shaken up, and can be interesting, rather than consistently bland and, at best, inoffensive.

In ORAS, your motivation for progress is the same as it ever was

As it stands, your biggest motivation for progressing through Pokémon ORAS is the same as it's always been: To collect and train stronger and stronger Pokémon. Thanks to the multitude of monsters and increasingly complex type-matching strategies, that pursuit is still worthwhile and engaging, despite Pokémon ORAS's baby-steps approach to iteration.